GEISMAR - Shortly after bystanders rescued a man from a burning car in a Tuesday night incident that was caught on video, drugs were found in the vehicle and the man was arrested.

According to the Geismar Volunteer Fire Department, a plume of smoke was coming from the car 36-year-old Dexton Weber was driving as he pulled into the parking lot of a TNT Express convenience store along Hwy 30 in Geismar.

Abdullah Cheema was working that night when he heard a loud crash in the parking lot.

"I was on the phone with 911, and a customer said grab the fire extinguisher because the car could catch fire at any second," Cheema said.

The car soon burst into flames and bystanders jumped into action, searching for an extinguisher and using it to smash one of the car's windows to help Weber, who was locked inside.

"The sparks were headed toward the pumps. That was the scariest thing I feel," Cheema said.

Deputies with the Ascension Parish Sheriff's Office arrived and pulled Weber to safety. Geismar volunteer firefighters were also on scene.

"This guy could have hit one of the gas pumps, and that really would have been a bad situation. We thank God it didn't turn out any worse than what it did," Geismar Volunteer Fire Chief Nathaniel Stephens said. 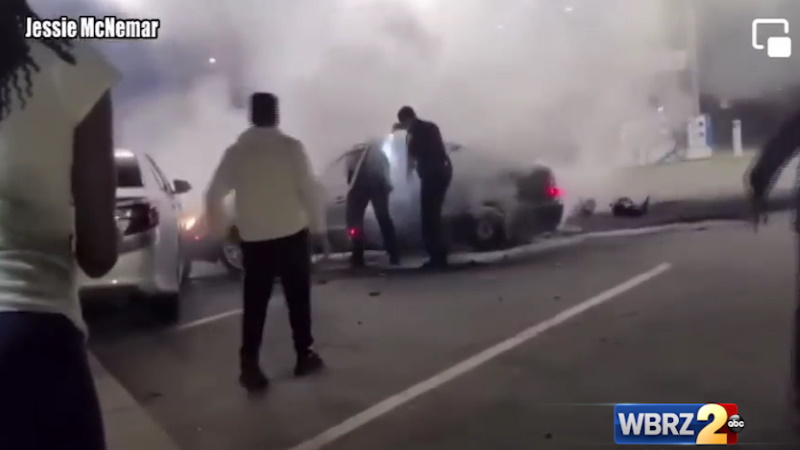 But Weber's troubles were not over.

While he was being treated for injuries at a local hospital, deputies conducting an inventory of the vehicle and discovered heroin along with other drug paraphernalia.
After Weber was discharged from the hospital, he was arrested and booked into Ascension Parish Jail on charges of operating while intoxicated - second, possession of heroin, and prohibited act - drug paraphernalia.
Report a Typo