Wednesday AM Forecast: The 30s will be back tonight

Temperatures behind the storms are much cooler.

Today & Tonight: The rest of the storms from overnight are in the clearing process. There may be a few more showers through the morning, but by noon we will see some sunshine. Those storms did come in along a cold front and temperatures today will actually be dropping through the afternoon. Most the afternoon hours will be spent in the 50s. With some sunshine, the temperatures may rebound into the low 60s briefly. After the sun goes down, temperatures will drop fast into the upper 30s.

No activity expected for the next 5 days. Today is the last official day of hurricane season.

Tuesday Review: There were a few storm reports for hail, wind, and tornadoes in Amite and Pike counties as storms came through on Tuesday afternoon. The National Weather Service is working to confirm any tornadoes and their paths. 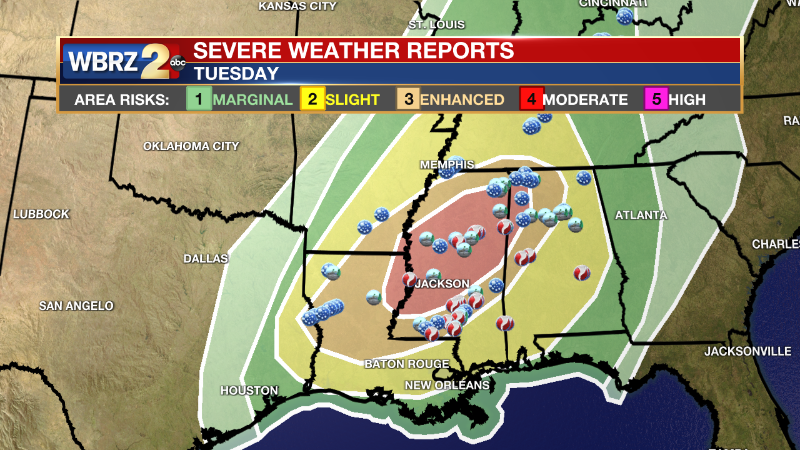 PORT ALLEN - A West Baton Rouge Sheriff's Office employee who admitted to stealing tens of thousands of dollars remains on paid leave and there are new details about the scheme.

Sources told the WBRZ Investigative Unit in at least one instance, an individual received a traffic ticket and paid for it in cash. Problem is, it was never cleared out of the system. That individual got into legal trouble where the outstanding ticket was discovered. That person was able to produce receipts where cash was paid to settle the ticket. Mandy Miller's name was on it.

Multiple deputies talking to WBRZ on condition of anonymity said Sheriff Mike Cazes is making the entire office look bad by keeping a confessed thief on the payroll.

"It aggravates everyone to no doubt," one deputy told WBRZ. "They are looking for a scapegoat to turn the attention around. This department is famous for that."

Since the allegations broke, Sheriff Mike Cazes has refused to do any on-camera interviews to let the public know what's going on in his office. Meanwhile, employees in his office are demoralized that he has continued to leave Miller on the payroll after she confessed to stealing.

"This is scary and bewildering," a deputy said. "Everyone is of the same opinion. Anyone else would have been fired a long time ago."

"If it was perfectly on the up and up and perfectly appropriate for him to continue to paying Ms. Miller, I would think he would have told us by now."

That is not the only controversy at the department. Many workers are upset after the WBRZ Investigative Unit published her salary. Miller was earning more than $72,000 to process traffic tickets — much more than the average road deputies make who put their lives on the line each day for public safety.

"Regarding her salary, they are all in shock to say the least," the deputy said.

State Police and the Legislative Auditor told us their investigations remain ongoing. As of Tuesday, Miller has not been charged with a crime.

COVINGTON - A convicted rapist released from prison just months ago is accused of killing two people, including a retired pastor, and leaving their burned bodies in downtown Covington.

The Covington Police Department said the victims were burned "beyond recognition" when they were discovered behind a glass-making company in Covington's downtown district around 7 a.m. Monday. An employee at the shop reportedly found the bodies when he showed up for work that morning.

Hours after the victims were discovered, police arrested 49-year-old Antonio Donde Tyson of Covington. He was booked on two counts each of first-degree murder, second-degree kidnapping and obstruction of justice. He is also booked on charges of resisting an officer and illegal possession of stolen things.

Several early reports linked the investigation to a retired pastor and a pastoral associate, Father Otis Young and Ruth Prats, who went missing from the area a day earlier. The coroner's office identified one of the victims as Father Young on Tuesday afternoon, adding that he died from blunt-force trauma. The second victim's ID is still pending DNA testing.

The church held a prayer vigil late Monday in response to the killings.

“Our hearts have been shattered by this unfathomable crime,” St. Tammany Parish President Mike Cooper said in a social media post. “We stand behind the Covington Police Department and St. Tammany Parish Sheriffs Office as they investigate this heinous action. Please join me in praying for the families and friends of the victims and the entire Covington community.”

On Tuesday it was also uncovered that Tyson, the alleged killer, had just been released from prison after serving about 30 years of a 40-year sentence for rape, armed robbery and aggravated burglary. Department of Corrections officials reportedly told WW-TV that Tyson, convicted in 1993, was eligible for an early release as soon as 2012, and he was released in August after meeting certain conditions.

WATSON - A woman was arrested after she allegedly sent a recording device to school with her special needs child.

The Livingston Parish Sheriff's Office said Amanda Carter, 39, was arrested on 20 counts of interception and disclosure of wire, electronic or oral communication. The sheriff's office and the school system announced the arrest in coordinated statements Tuesday afternoon.

Sources close to the family told the WBRZ Investigative Unit that the sheriff's office started investigating the situation after a parent sent a recording device to school with a special needs child, fearing she was being mistreated. The device was reportedly attached to the girl's wheelchair.

The WBRZ Investigative Unit has reviewed recordings of the child interacted with several unidentified adults at school.

Those recordings include at least one instance in which someone at the school jokes that they "almost slammed her," in what appears to be a reference to Gracie, who can be heard moaning during the same audio clip.

Amanda Carter's trouble stems from the moment where her daughter's wheelchair was moved to other areas in the school without her daughter in it. That's when other conversations were recorded.

The sheriff's office alleges that multiple devices were discovered over the course of the school year and that those recordings were edited and posted to social media without the consent of those being recorded.

Amanda Carter was unable to speak to WBRZ. Her husband, Jesse Carter says Amanda was told by a judge that she could not speak on the case.

Jesse Carter is not Gracie's biological father, but has helped raise her with Amanda.

He denies the allegations from the Livingston Parish Sheriff's Office that the recordings were edited.

"They were not edited. But I would love for the Livingston Sheriff's Department to put them up for public view. And get a specialist and we will see if they are really edited," Jesse Carter said.

Jesse Carter told WBRZ that he is scared his wife could go to prison for trying to protect their daughter.

"They set her up for failure."

He maintains that the recording devices were only used to make sure that Gracie, who is non verbal, was safe at school.

"[Gracie] can't tell us none of this. We don't know, nobody communicates, so Amanda did what every parent would do and wanted to find out how she was getting hurt each and everyday. It's just a shame that they would do this to a mother."

The school system said that none of its employees are being investigated based on the contents of the recordings.

Want to be a guest on the Noon News?

Want someone from your event or organization to be a guest on the Noon News? Click here to fill out our Noon News Guest Request form!