Rainy days either side of turkey, coldest air of season may follow

A cold front will bring showers and a few gusty thunderstorms to the region on Wednesday. After a short lull on Thanksgiving, a rainy pattern will set up Friday through Sunday. The coldest air so far this season may follow.

The Next 24 Hours: It will be a much different story than last night. Clouds and a muggy air mass will hold lows in the upper 60s. One or two showers is possible. Shortly after daybreak Wednesday, a cold front will move into the region with a broken band of showers and thunderstorms. A few storms could produce gusty wind, especially north of I-12. Most of the activity will wrap up by nightfall. Highs will make it into the upper 70s.

After That: The boundary does not have a lot of cold air with it so temperatures will stay above average into the weekend. After a foggy start, a little less activity will occur on Thanksgiving Day but skies will stay mostly cloudy and spotty showers are possible with highs near 76. A rather unsettled pattern will then begin on Friday and last through the weekend. Expect overcast skies with periods of rain and a few thunderstorms. Rain could be heavy at times. 5-day rain totals through Sunday night will be around 2-5 inches.

After a stretch of moderate to heavy rain this weekend, mild and muggy air will give way to the coldest temperatures so far this season. The average first freeze in #BatonRouge is Nov. 24 -- a possibility next week! | More Here: https://t.co/T5g3nw3Cp6 pic.twitter.com/EsSYOLROV5

A potent cold front will sweep through by Monday morning to start a period of below average temperatures. The average date of the first freeze in Baton Rouge is November 24. Lows Tuesday and Wednesday could get close. CLICK HERE to view your complete 7-Day Forecast.

The Tropics: A non-tropical area of low pressure southeast of Bermuda has merged with a frontal system and is producing gale-force winds and thunderstorms. Later in the week, the system could become separated from the front has a 20 percent chance of development.

The Explanation: An upper level disturbance moving across the Midwest will send a weakening cold front into the region on Wednesday and this could lead to scattered showers and thunderstorms to pop as early as the morning hours. While the front slides into the area, there should be enough instability and low-level wind shear for gusty wind north of I-12 and possibly an isolated tornado into southwest Mississippi. By the evening hours, weakening upper level winds will cause the front to stall near the local area. With the front stalled near the coast, some fog is possible into Thanksgiving morning due to low level moisture remaining over the area. The front will stall along the coast leaving some clouds and spotty showers in the area. 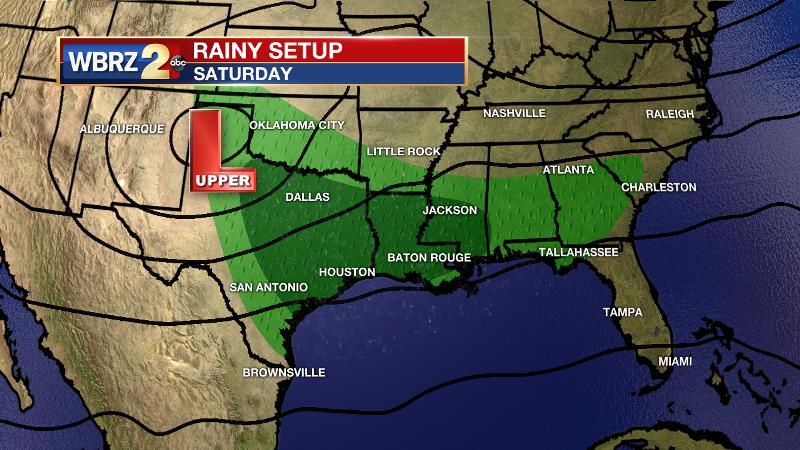 Meanwhile, an upper level trough will begin to form over the Mountain West. By Friday, this trough will merge with a disturbance over the Midwest and will create a large region of divergence and lift in the atmosphere. As southwesterly winds transport deep moisture into the region from the Pacific and Gulf, the stage should be set for a 2 to 3 day period of moderate to heavy rainfall. The main discrepancy between forecast models at this time is whether the pattern lasts until Sunday morning or Sunday night. All told, about 2 to 5 inches of rain is expected, with the highest totals likely north of I-10. Fortunately, it has been quite dry over the last few weeks and the grounds can thoroughly saturate before runoff becomes an issue. Still, we should keep an eye on it. A cold front will put an end to the messy weather by Monday. Unlike Wednesday’s front, this one will have a “Canadian connection” and be able to usher in the chilliest temperatures of the season so far. Below average (67/45) temperatures are anticipated into the middle of next week with several lows in the 30s! The first freeze of the season is not out of the question on Tuesday or Wednesday morning.