More rainy days on the way, watching the tropics

As is typical for the month of July, The WBRZ Weather Team and you are focused on the tropics. What happens there will dictate our weather through the 7-Day Forecast.

The Next 24 Hours: Overnight, leftover showers and thunderstorms will ease and yield partly cloudy skies. Once again, a look to the northwest just after dusk may allow a glimpse of Comet Neowise just beneath the Big Dipper. Look for a consistent-with-the-times low temperature in the mid 70s. On Wednesday, morning sunshine will push high temperatures into the low 90s. Instability, seen in some vertical cloud development, will lead to a crop of showers and thunderstorms—expect about 40 percent coverage across the 13 Parish, 3 County forecast area.

The Long Term Trend: Thursday and Friday appears to be the most period in the 7-Day Forecast with regard to showers and thunderstorms. Tropical moisture (see below) associated with a low pressure system crossing the Gulf of Mexico will bump up the number of showers and thunderstorms that are able to develop. Widespread coverage is expected both days the low exits the region and precipitation reverts to more typical, isolated coverage over the weekend. Look for 7-Day rainfall totals of 1 – 3 inches with the highest amounts closer to the coast. Per usual, an isolated higher amount could occur—especially where tropical downpours occur. Average temperatures for the period include highs in the low 90s and lows in the mid 70s. Through this workweek, readings will be near or below normal before extending above normal next week. The Climate Prediction Center shows a good chance of above average temperatures persisting in the 8 – 14 day range. 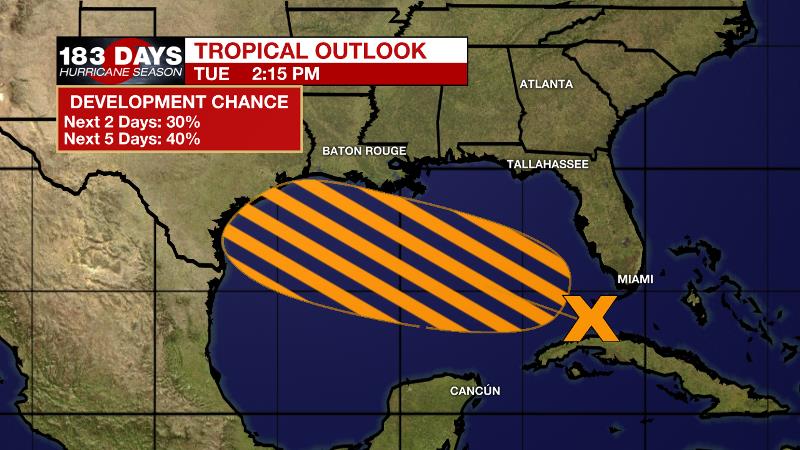 The Tropics: A tropical wave with disorganized showers and thunderstorms near southern Florida will move west-northwest and over the southeastern Gulf of Mexico on Wednesday. Gradual development of the system is possible and a Hurricane Hunter Aircraft may be sent out to investigate soon. The National Hurricane Center puts a formation chance at 40 percent. The current forecast is for this system to cross the central Gulf of Mexico, reaching Texas by the end of the week.

Further east, Tropical Depression Seven has formed 1,400 miles east of the Windward Islands. As of 4pm Tuesday, the storm was moving toward the west-northwest near 8 mph and will turn toward the west with an increase in forward speed is expected by Wednesday. That motion should continue through Friday. Maximum sustained winds were near 35 mph with higher gusts. Strengthening is forecast during the next couple of days, and the depression is expected to become a tropical storm by Wednesday.

The Explanation: The primary feature of interest to the forecast over the next week will be a tropical wave moving west into and across the Gulf of Mexico Wednesday through Friday. There is no major concern for substantial development out of this system and the greatest impacts from it will be over coastal and offshore areas. As atmospheric moisture gradually increases Wednesday through Thursday, measurable rain coverage will tick up from scattered to widespread. Still, since the low will be well south of the area, it will take daytime warming and marine breezes to kick out showers and thunderstorms so most of the activity will occur around and after midday. Especially Thursday and Friday, the added cloud cover and precipitation in the area may hold down high temperatures. No major changes to dew point temperatures in the low to mid 70s will keep low temperatures in that range. By Friday, the tropical system will push away to the southwest and a ridge in the mid-levels of the atmosphere will lead to some drier and more stable air. Just isolated showers and thunderstorms will form Saturday into early next week along marine breezes after slightly above average high temperatures.