Coldest night since late Feb. is ahead, showers return Wed.

A *FREEZE WARNING* is in effect from 10pm Monday until 8am Tuesday. Since this will be the first freeze of the winter, use this time as a reminder to cover or move sensitive vegetation, make sure pets have a warm place to go and help anyone you know without access to heat.

The Next 24 Hours: For the first time since February 22, Baton Rouge area thermometers are pegged to slip below freezing. Most locations north of I-10 will wake up to temperatures between 32 and as low as 28 in southwest Mississippi. Sunshine will warm readings into the middle 50s by Tuesday afternoon. It will not be nearly as blustery as Monday.

After That: After another chilly start, likely just above freezing on Wednesday morning, conditions will change quickly. Sun will send temperatures into the 60s early, however clouds will overspread the region from west to east during the afternoon hours and a few light showers could even develop by nightfall. 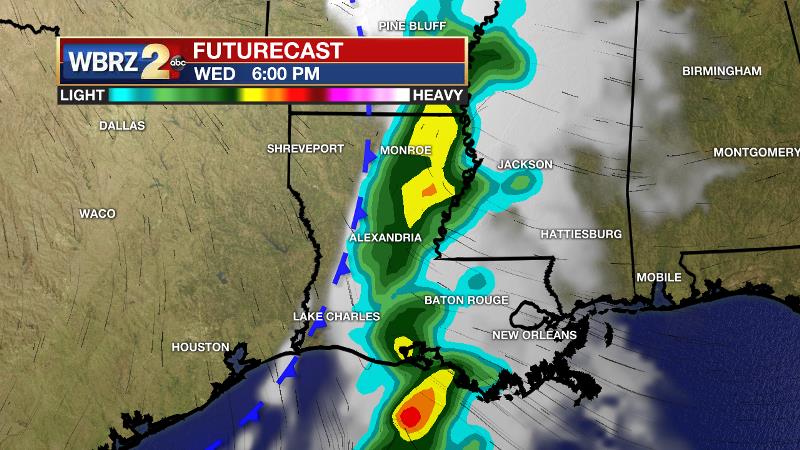 A weakening frontal system will bring scattered showers and rumbles of thunder overnight into midday Thursday. Once this system clears, skies will be mainly clear and temperatures will continue to be below average Friday through the weekend with highs near 60 and lows near 40. Saturday and Sunday morning should be just above freezing but some patchy frost is possible so you may still want to keep an eye on sensitive plants. CLICK HERE to view your complete 7-Day Forecast.

The Tropics: A large non-tropical low pressure system north of the Madeira Islands has been producing gale-force winds and a broad region of showers and thunderstorms. This low has changed little in organization over the last 24 hours, but there is a 40 percent chance of subtropical development over the next day or two before conditions are forecast to become unfavorable for further development.

The Explanation: A surface high pressure system trailing the cold front that passed through on Sunday created a persistent northwest surface when that will finally slacken overnight. As winds ease, with clear skies, temperatures should have favorable conditions for rapid cooling tonight as the first freeze of the season is anticipated. The Capital City will likely drop a few degrees below 32 and some upper 20s may be registered in the typically coolest areas north and east of Baton Rouge. If winds remain above 5mph for most of the night, temperatures could stop 2-3 degrees warmer than forecast. The surface high will migrate directly over the local area on Tuesday continuing clear skies and with much lighter winds. Highs will climb a few degrees warmer than Monday. Into Wednesday, a complex partnership of upper level lows will dig into the Lower Midwest spawning a surface low to form over Texas. In conjunction with southwesterly flow aloft, just enough moisture will return to the atmosphere for some clouds and showers to develop. By this time on Wednesday afternoon, temperatures will be well above freezing and the increasing moisture from southeast surface winds will keep them there. Scattered showers and possible some embedded thunderstorms will be possible from Wednesday evening to Thursday morning as the surface low and a weak cold front crawl across the region. Once this system exits to the east, drier conditions are expected Friday through the weekend with a continuation of below average temperatures.