One of social media's most trendsetting figures is following in the footsteps of other popular online figures by leaving Twitter.

Chrissy Teigen has reportedly deleted her Twitter account, citing the social media platform's negative impact on her life as a reason.

Teigen, a model and TV personality, had more than 13.7 million followers and was known for her frequent, and often humorous Twitter updates.

But on Wednesday (March 24), she used a series of tweets to announced that she would be leaving the site.

"Hey. For over 10 years, you guys have been my world. I honestly owe so much to this world we have created here. I truly consider so many of you my actual friends," she wrote.

"But it's time for me to say goodbye. This no longer serves me as positively as it serves me negatively, and I think that's the right time to call something."

Last year, Teigen used Twitter, in addition to her other social media accounts, to announce that she and her husband, John Legend, lost a child following pregnancy complications.

Though some appreciated her openness, others criticized her decision to share the personal news on social media.

"My life goal is to make people happy. The pain I feel when I don't is too much for me. I've always been portrayed as the strong clap back girl but I'm just not," she wrote Wednesday.

"Live well, tweeters. Please know all I ever cared about was you," she added. 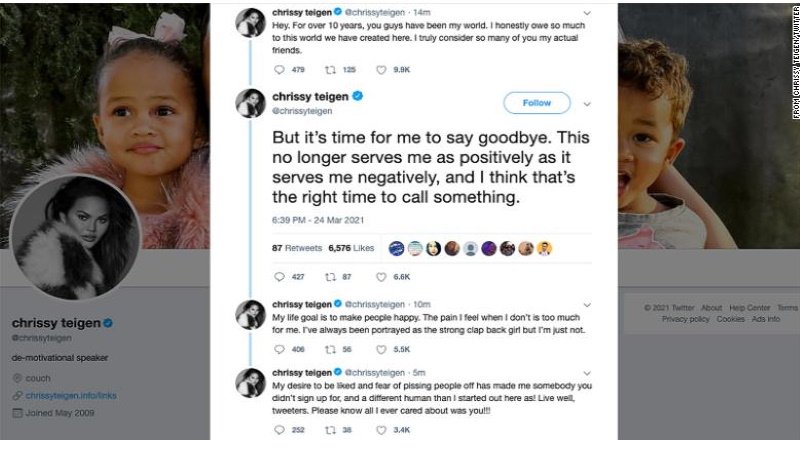 Other celebrities who have left Twitter either temporarily or permanently include Alec Baldwin, Lizzo, and "Stranger Things" actor Millie Bobby Brown.