Chilly to mild, then another cold front

As most river levels trend down on Tuesday, so too will temperatures. The next chance for showers will come on Thursday evening.

Today and Tonight: With a weak cold front through the area on Tuesday, clear skies will stick, but cooler temperatures are expected with highs in the mid 50s and north winds of 5-10mph. Following that, a freeze is a bit higher chance on Wednesday morning with clear skies and light winds. 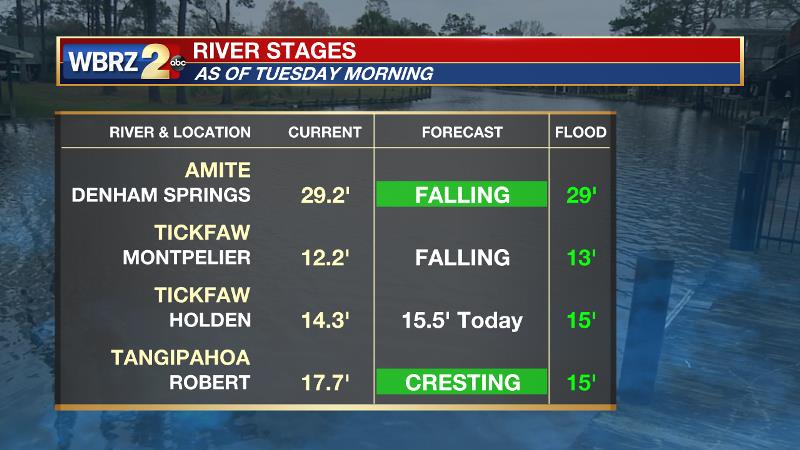 Up Next: After a milder Wednesday, clouds will increase into Thursday, as does the chance of a few showers Thursday night into Friday morning due to another weak front. It is questionable as to much clearing occurs between this system and the next which comes by the second half of the weekend. At this time, it appears as though most outdoor events on Saturday, especially those happening early, will stay dry. The cold front on Sunday will bring more clouds and showers, as well as a punch of chilly air. All of the excitement that circulated on social media last week seems unfounded, as temperatures currently are not expected to dip much lower than freezing, if they get there at all.

A weak, reinforcing front will leave thermometers a few degrees cooler on Tuesday as north winds persist. Surface high pressure over Mississippi will maintain clear skies and allowing for ample cooling overnight. A light freeze is possible across southwest Mississippi and parts of east central Louisiana Wednesday morning. The next storm system will approach from the northwest on Thursday. Tapping Gulf of Mexico moisture, this cold front will likely stir up a few showers, but simply will not have as much gusto as the Saturday soaker. Limited lift will likely cut down on rain coverage. The front will move across the area on Thursday night pushing deep moisture closer to the coast where it will reside through the first half of the weekend. Still, clouds and showers may stick on Friday morning in close proximity to the front. Moisture will retreat north on Saturday, returning unsettled weather for the second half of the weekend before another cold front pushes through early Monday morning with a bit more potential for temperatures to drop close to freezing.