Another round of showers before a return to the 30s

The second of two cold fronts will push through the region tonight. A few mornings in the 30s are expected to follow.

The Next 24 Hours: The second cold front in as many days will drop across the region tonight with clouds and scattered showers and perhaps an isolated thunderstorm. Low temperatures may ease back through the 60s and even make it into the upper 50s in a few neighborhoods. If not already over, showers will wrap up from northwest to southeast soon after daybreak with subsequent clearing. Returning sun will be overcome by northwesterly winds of 10-15mph advancing cooler and drier air into the region. High temperatures will stay in the mid to upper 60s. 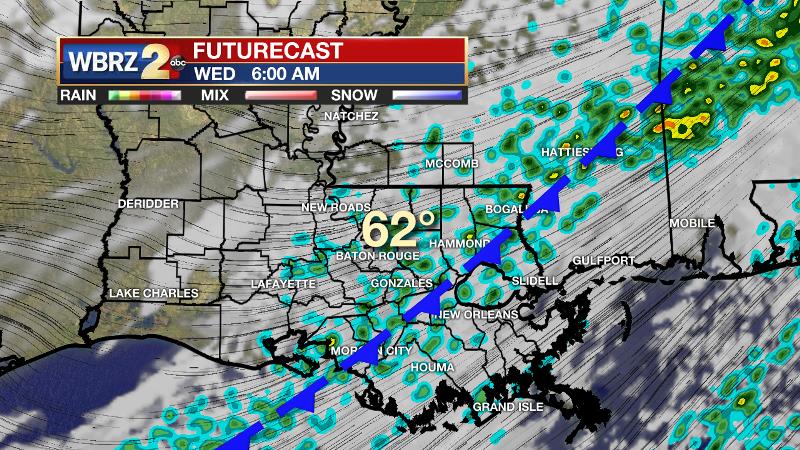 After That: Beneath clear skies, lows will drop into the upper 30s by Thursday morning and highs will struggle into the 50s. The coldest temperatures of the week will occur on Friday morning with mid 30s for most and some areas north of I-12 challenging freezing. More sun is in the forecast to end the week. The next fast moving storm system will send another front and some showers through the area during the middle part of the weekend. CLICK HERE to view your complete 7-Day Forecast.

The Explanation: Along with a stalled front near the coats, an upper level trough moving across the Mid South will drive a reinforcing boundary through the area tonight with another batch of showers. Rainfall will be light to moderate totaling less than an inch and an embedded thunderstorm is possible. Temperatures will not change much until this second front clears the area and then thermometers will go back to seasonable readings. Behind the front, expected clearing skies on Wednesday afternoon and northwesterly winds will cause temperatures to start falling by dusk. Lows will end up in the mid 30s by Thursday morning. A surface high pressure system will allow cooler and drier conditions on Thursday with highs not leaving the 50s despite sunshine. Clear skies and light winds will set up the coldest night of the week into Friday morning with lows in the low to mid 30s. An upper level ridge will warm the atmosphere and cause some compressional warming Friday afternoon and Saturday in advance of the next frontal system. The associated upper level trough will move north of the local area and send a cold front through on Saturday night or Sunday morning. So, after highs briefly go above average, some showers are expected for the second half of the weekend. Then, a seasonable start to next week is in order.