WATCH: Burglars use truck to drag ATM out of Walgreens during botched heist

BATON ROUGE - A group of burglars smashed through entrance of a Walgreens overnight in a failed attempt to make off with an ATM.

WATCH IT HERE: Security video captures the moment-by-moment attempt by some thieves to steal the ATM

The failed theft attempt happened at the Walgreens at the intersection of Perkins Road and Siegen Lane.

Sources reported seeing multiple wrecked cars as well as smashed and broken glass in front of the pharmacy.

According to the East Baton Rouge Sheriff's Office, it was shortly after midnight that deputies were dispatched to the store in response to an attempted burglary in progress.

An anonymous caller told authorities she was in the parking lot at Jack in the Box across the street when she saw three people in an older model truck trying to steal an ATM.

When deputies made their way to the crime scene, they saw that Walgreens' entire front window had been busted and the ATM was sitting in the middle of the parking lot with two large red straps attached to it.

In the picture below, an older model, dark in color Chevrolet pick-up with a gray panel at the bottom is depicted as it is pulling away from the scene, leaving the ATM on the ground. 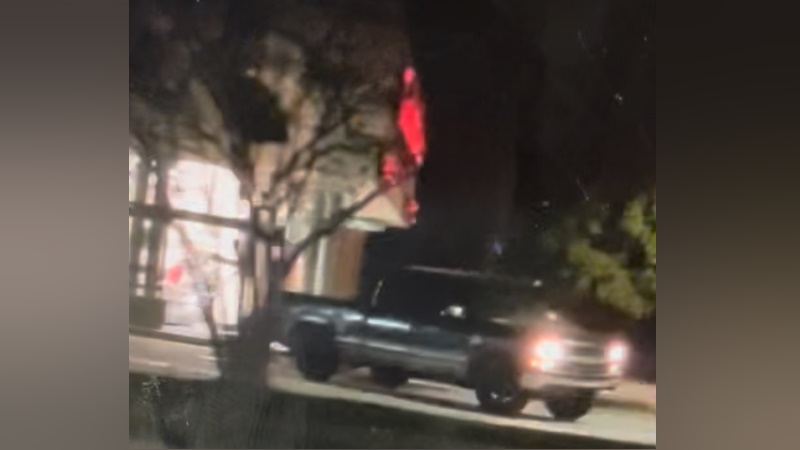 The sheriff's office says no money was stolen during the attempt and deputies are currently searching for three suspects.

Based on video surveillance and eyewitness accounts, the first suspect smashed Walgreen's front glass door with a blunt object. The second suspect was seen climbing into the store and then tying a rope to the ATM. A third suspect then pulled the machine out of the store.

The three were seen trying to put the ATM into the back of their truck, but they were unsuccessful. According to witnesses, the suspects fled in the direction of Essen Lane on Perkins Road. The vehicle has yet to be located.

WBRZ's Dana DiPiazza spoke with the manager of Walgreens around 8:30 a.m. and the manager confirmed that store personnel are working to clear the debris and glass from the area so the store could reopen Monday.

In the meantime, customers who need to pick up prescriptions from Walgreens' pharmacy can do so as the drive-thru is currently open.

Anyone with information related to the attempted theft is asked to contact EBRSO at (225) 389-5000.