Your upcoming weekend will feature fair, seasonable weather. We cannot rule out a stray shower, but overall quiet conditions are anticipated.

The Next 24 Hours: Skies will continue their gradual clearing trend overnight. Low temperatures will dip into the mid 60s. A mix of sun and clouds is expected on Saturday with high temperatures chugging back into the low 80s. It should be a nice afternoon for those attending the LSU Football game. It is worth mentioning that a stray shower could develop, but the best chance of that happening will be south of I-10.

After That: Sunday will also be partly sunny with highs in the mid 80s. The first of two cold fronts pegged for next week will push through the area on Monday evening with a few showers and thunderstorms. Temperatures will tumble 10 degrees from average behind this boundary. A secondary, reinforcing front will pass Thursday to drop readings perhaps another 5 degrees. Starting on Tuesday, expect a few days with highs in the 70s and lows in the 50s, maybe even some low 50s after the second front by the end of next week! Indications from the Climate Prediction Center are that the cool air will hold even beyond the 7-day Forecast.

The Tropics: The Atlantic Ocean, Caribbean Sea and Gulf of Mexico are now quiet. No new tropical development is expected over the next 5 days.

Hurricane season is NOT over yet, so we can't let our guards down. There have been many intense hurricanes in the month of October (Michael 2018). https://t.co/BppFoHzxLv

The Explanation: Over the weekend, a weak upper level trough in the wake of Beta will remain centered over the region allowing some clouds to mix into skies. However, the exit of a tropical air mass should leave conditions too dry for anything but a stray shower. A longwave trough dipping into the southeast U.S. will absorb this trough by Monday and drive a cold front through the area during the evening hours. Model guidance is producing some showers and thunderstorms but the atmosphere will be rather dry so little more than isolated coverage is expected right along the boundary. The National Weather Service encourages an eye to this for the possibility of a strong thunderstorm or two. Some gusty wind could occur immediately along the front thanks to ample lift and instability from daytime warming. 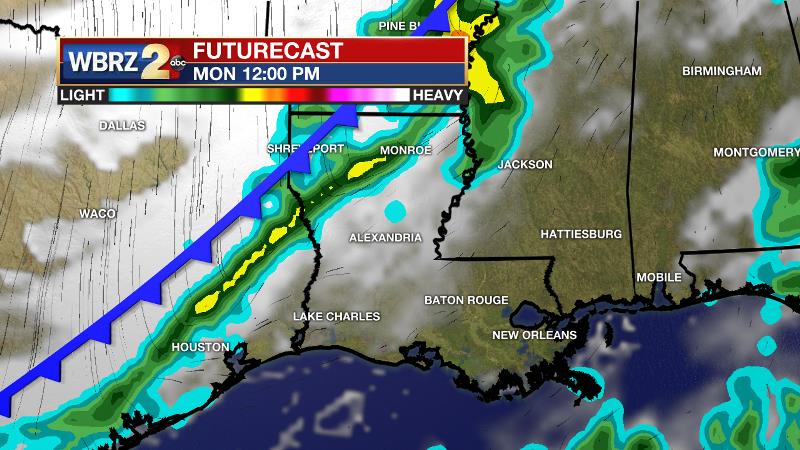 Thermometers will drop several degrees behind the first front with a taste of fall temperatures arriving on Tuesday. A deeper upper level trough will dig into the Eastern U.S. Wednesday and Thursday sending a second front and even cooler air into the region to end the week. Some low temperatures in the low 50s are possible by Thursday or Friday.