Just a few more days of heat in the forecast.

Today & Tonight: More sunshine and HEAT headed your way this Saturday. Conditions waking up are comfortable with temperatures in the low 70s and mostly sunny skies. Northeasterly winds in the area will keep you mostly dry today. A shower possible along the coastline, but it will be brief. Temperatures will continue to climb into the mid-90s throughout the day. Steamy temperatures but lower humidity will keep our feels like temperatures near 100°. Some clouds will build into the area later during the day, but nothing that will provide any relief from the heat. Into the evening hours temperatures will cool back into the low-70s overnight.

Up Next: Tomorrow will be just slightly more wet, but still not forecasting any total washouts this week. Waking up Sunday you will be seeing mostly sunny skies and still feeling temperatures in the low-70s. As the day goes on temperatures continue to warm into the mid-90s. A cold front is expected to begin pushing into the area late Sunday evening, ahead of the front we are expecting just a few sowers and storms to bubble up. For the most part showers will be fast moving through the Capital Area. Waking up Monday morning some moisture will still be lingering in our area. We will still be trying to break up this summertime pattern. Daytime highs will top out in the low-90s Monday afternoon. However, as the cold front really sets into the area and we begin to see winds shift out of the north, we are expecting a more fall like forecast. By Tuesday morning we begin to see more changes in the forecast. Waking up with temperatures in the low-60s. You can expect much less humidity starting Tuesday and into the rest of the work week. Everyday by the afternoon hours temperatures will be in the mid-80s. Click here to see the 7-day forecast. 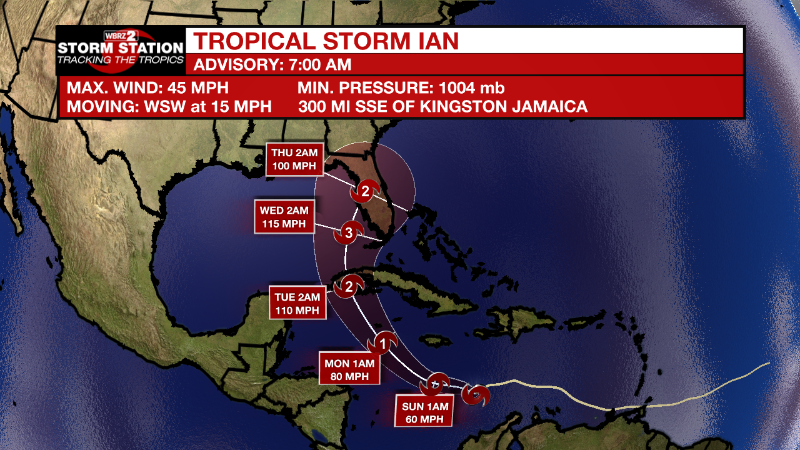 Tropical Storm Ian formed on Friday morning in the central Caribbean Sea. As of 8am Saturday maximum sustained winds remained at 45mph. By Sunday and Monday, Ian will turn to the northwest and become a hurricane on approach to the Cayman Islands. Florida could be a target of then Hurricane Ian by the middle of next week.

Central Tropical Atlantic:
Showers and thunderstorms remain disorganized in association with a
broad area of low pressure located several hundred miles
west-southwest of the Cabo Verde Islands. Despite unfavorable
upper-level winds, some slow development of this system is possible
over the next several days while it drifts northwestward or
northward over the central tropical Atlantic.
* Formation chance through 48 hours...low...20 percent.
* Formation chance through 5 days...low...30 percent.