Lots of July this week, Beryl diminishes and Chris strengthens

An area of high pressure center located offshore of the Florida Panhandle has not moved much in the last 24 hours. Its delay will keep the chances for showers and storms on Monday elevated, but should move closer to the area late Monday and into Tuesday therefore quieting things down.

Today and Tonight: Partly cloudy skies will warm things up through the morning and lead to scattered showers and thunderstorms by 3PM. Highs will reach about 90 degrees with lows dipping to 74 degrees with calming winds overnight.

Up Next: Isolated, pop-up showers will still be in the vicinity on Tuesday, but a relative break from the wet start of July that has been experienced is expected. Drier conditions will not last long, as another trough will set up from the north by Wednesday. This will increase the number of showers and storms moving onshore across the Gulf States. This pattern will set up camp and continue to rain down through the rest of the week and into the weekend. 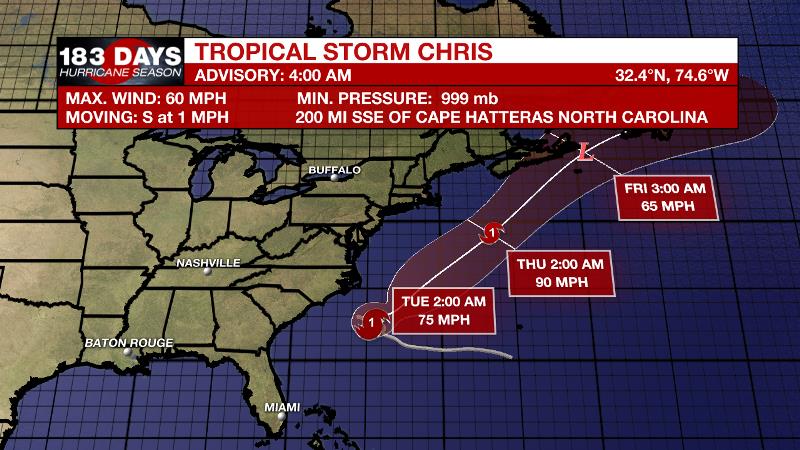 The Tropics: Tropical Storm Chris will continue to meander off the Carolina Coast while strengthening on Monday. As of 4am the storm had 60mph winds and a minimum central pressure of 999mb. Chris was drifting toward the south at 1 mph and will remain nearly stationary over the next day or so. A northeastward motion is forecast to begin late Tuesday, and Chris is forecast to accelerate northeastward on Wednesday and Thursday. Chris is forecast to become a hurricane late today or tonight. Swells generated by Chris are expected to increase and affect portions of the coasts of North Carolina and the Mid-Atlantic states during the next few days.  The remnants of Tropical Storm Beryl, are forecast to move west-northwestward and spread over the Virgin Islands and Puerto Rico Monday encountering unfavorable upper-level winds. However, environmental conditions could become somewhat conducive for regeneration of a tropical cyclone later this week when the system is forecast to turn northward over the Bahamas and the western Atlantic. 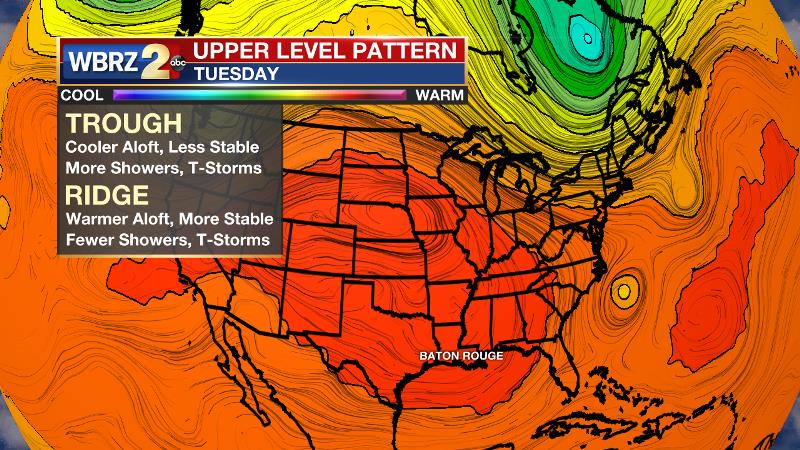 The stalled front responsible for widespread rain and storms over the weekend has weakened and drifted north. A ridge to the northeast will be lifting away from the area as a ridge to the northwest expands southeastward over the region. This will put the area in a slightly less conducive region for convection Monday and Tuesday. Do not expect a drastic drop in rain chances, rather the normal 30 – 40 percent coverage for the time of year. Into the middle of the week to this weekend, the ridge to the north will gradually migrate towards the Mississippi River Valley. Meanwhile, easterly flow across the Caribbean Sea will send weak inverted troughs through the Gulf. This will keep the southern part of the ridge from expanding too far south and thus minimize local subsidence. Ample daytime heating with moisture in place will result in typical diurnally driven convection.