Tonight and Tomorrow: Clear skies tonight, and a rather nice evening in store. Temperatures will be dropping slowly into the upper 70s around 11 PM, on our way to an overnight low of 72° with calm winds. Mostly sunny skies to start off your Sunday, but clouds will be slightly increasing through the morning hours. This will lead to some isolated showers and storms developing through the afternoon hours. These cells are associated with a westward moving wave moving showers east to west across the area. Some storms could incur heavy downpours, so localized flooding is possible in some spots. Temperatures will warm into the 80s around 9 AM, as highs peak near 91° with light winds out of the northeast. 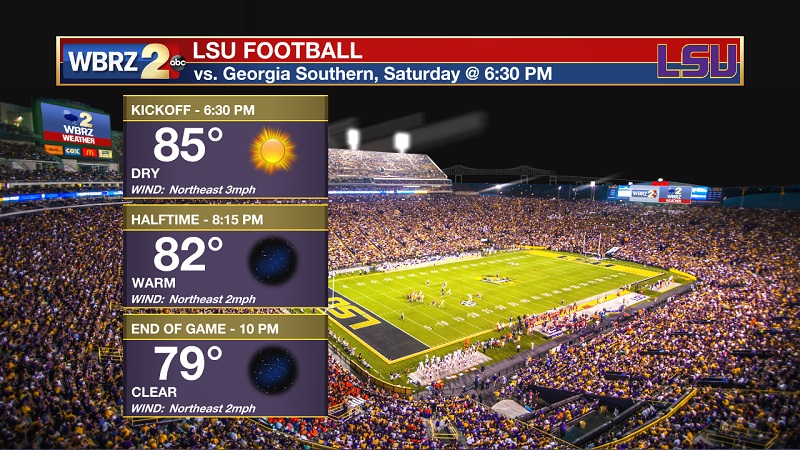 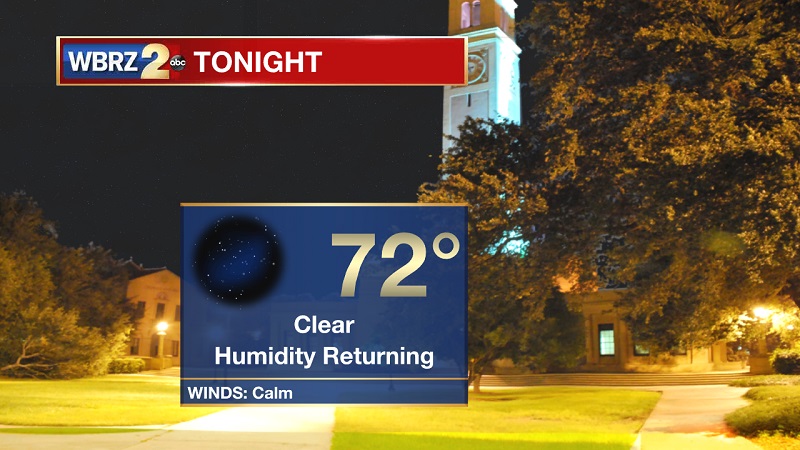 Up Next:  Spotty to isolated afternoon showers and storms continue into Monday before drier conditions return on Tuesday. Sunny, dry, and warming will commence through the workweek, as highs hover in the mid-90s Wednesday and Thursday. 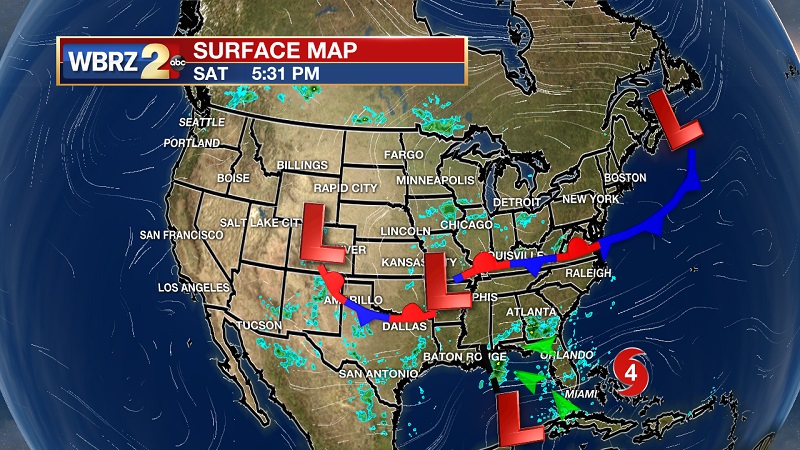 The Tropics: Dorian is a strong category 4 hurricane and is expected to hit portions of the Northwestern Bahamas on Sunday. It is currently located about 170 miles east of Great Abaco Island and about 355 miles east of West Palm Beach, Florida, with 150 mph sustained winds and moving west at 8 mph. A Hurricane Warning is in effect for the Northwestern Bahamas excluding Andros Island, which is in a Hurricane Watch. A Tropical Storm Watch is also in effect for Deerfield Beach, Florida to Sebastian Inlet, Florida. Dorian is moving toward the west near 8 mph, and a slower westward motion should continue for the next day or two, followed by a gradual turn toward the northwest. On this track, the core of Dorian should be near or over portions of the northwestern Bahamas on Sunday, and move closer to the Florida east coast late Monday through Tuesday. Dorian is a category 4 hurricane and some fluctuations in intensity are likely, but Dorian is expected to remain a powerful hurricane during the next few days. 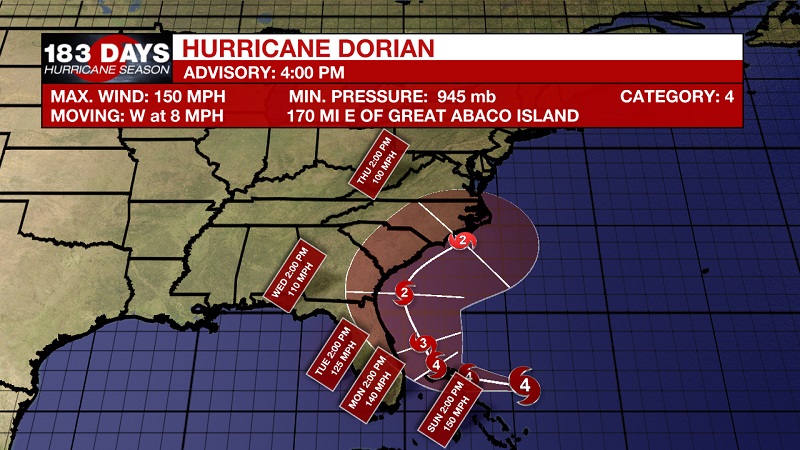 We are also tracking two tropical waves, one over the tropical Atlantic and the other located in the southern Gulf of Mexico.

The first is a tropical wave located a little more than 100 miles east of the Cabo Verde Islands, and is producing widespread cloudiness and showers. Environmental conditions are forecast to be conducive for development of this disturbance during the next few days and a tropical depression could form next week while the system moves across the eastern tropical Atlantic Ocean. Heavy rainfall is possible over portions of the southern Cabo Verde Islands during the next couple of days. The National Hurricane Center is forecasting a 20% chance of tropical development within the next 2 days, but that increases to a 60% chance over the next 5 days. 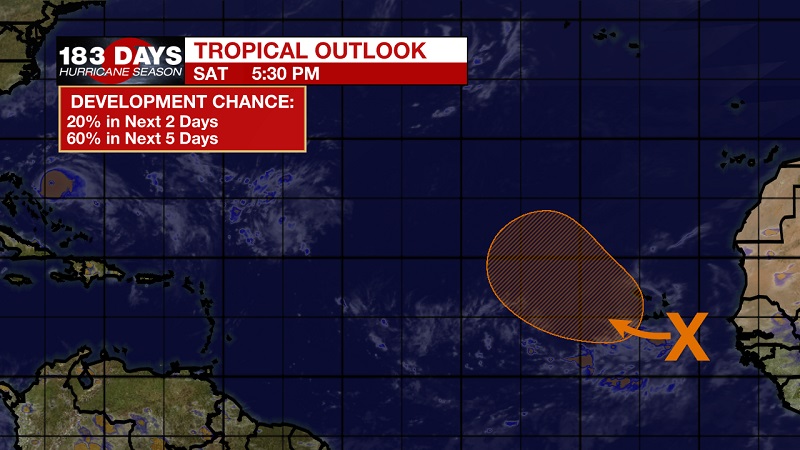 The second is a broad area of low pressure located over the southeastern Gulf of Mexico, and it is producing limited shower and thunderstorm activity. Some gradual development of this system is possible during the next few days while it moves slowly westward across the southern and southwestern Gulf of Mexico. The National Hurricane Center is forecasting a 20% chance of tropical development within the next 2 days, increasing to a 30% chance within the next 5 days. 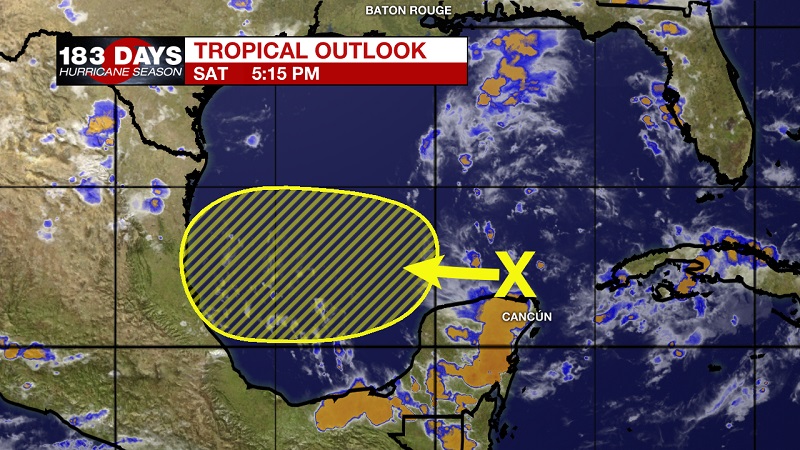 An area of low pressure located in the eastern Gulf will press west overnight and into Sunday. This will bring added moisture into the atmosphere, translating into heightened humidity and developing afternoon showers and storms. This will continue through Monday, and should dissipate by Tuesday. This is a result of a developing high pressure ridge that will move in from the southern Rockies through the midweek, helping to return dry air back to the Gulf Coast. Dewpoints should also drop slightly, and stay in the low 70s through the week. High temperatures will slowly warm though, breaking into the mid-90s through the midweek. Winds will begin to shift Thursday into Friday from east to north, which should drop highs back down to around our average of 92° into the weekend.