Bad timing on showers, then a chill

After a brief warm-up, showers and thunderstorms will lead a cold front into the area Friday night. The coldest air so far this season will follow.

Today and Tonight: More sunshine is expected for Thursday as high temperatures moderate a bit, getting into the upper 70s. Winds will be light and southwesterly. Beneath clear skies, overnight lows will be comparatively warmer than this morning, in the upper 50s.

Up Next: On Friday, a cold front will push into the area. A round of showers and thunderstorms is expected ahead of the front, beginning as early as Friday afternoon. Wet weather may impact area high school football games. With temperatures falling into the 60s during the action, it might be a good idea to take umbrellas, ponchos and even a light jacket. The cold front will clip through quickly and showers will not last beyond Saturday morning. Clouds could linger into the first half of the weekend though and northwest winds will increase to 10-15mph leading to a brisk Saturday afternoon. Highs will have difficulty reaching the low 60s. If you are heading to the Southern Jags game in Little Rock, take layers! Saturday night, lows will dip into the upper 30s. Some frost is not out of the question. After a sunny and cool Sunday, high temperatures will be moderating back into the 70s next week. 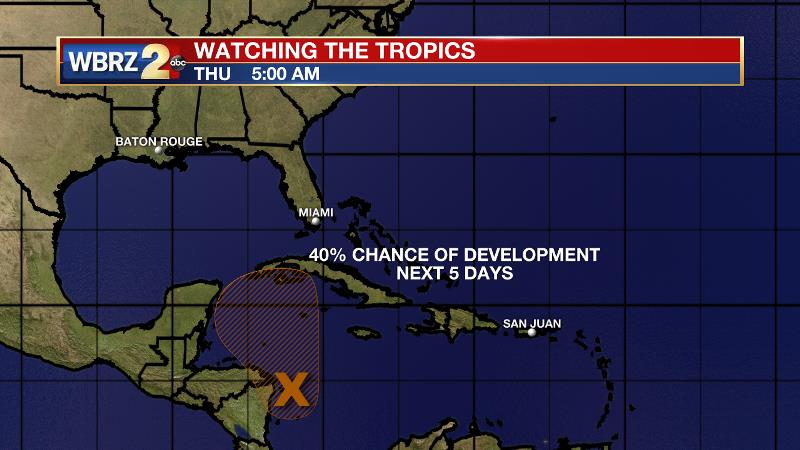 The Tropics: A broad area of low pressure in the southwestern Caribbean Sea has a 40 percent chance of development as it drifts north along Central America. At this time, there is no threat to Louisiana. We will keep you posted.

For the end of the week, expect a ridge to shift east allowing winds to come in off of the Gulf. With the late fall push of moisture a little weaker, another dry day is anticipated Thursday but temperatures will be a bit more mild. With another fairly cool night, but increasing dew points and light winds, some fog could be an issue Thursday night. A deep trough and another cold front will approach the area on Friday. Both the GFS and ECMWF are now suggesting an area of showers and thunderstorms out ahead of the front. Precipitation could begin as early as Friday afternoon and last into Saturday morning. Models wrap most of the precipitation by dawn Saturday. As clouds will linger into the afternoon, thermometers will be well below average on Saturday, struggling for the low 60s. On top of that, northwest winds of 10-15mph will have it feeling rather brisk outside. Plan accordingly if heading to any number of events in the region. Saturday night will be the coldest period with low temperatures in the upper 30s and some light frost possible. Another cool and sunny afternoon will follow on Sunday before a slow moderation in temperatures occurs through Halloween. At this time, temperatures are expected to stay at or just below average into the middle of next week. The next chance for rain will not come until beyond Halloween.