The end of the week will feature much warmer temperatures. The next cold front will bring widespread rain and thunderstorms at the beginning of the weekend.

Next 24 Hours: Alas, some holes in the cloud deck are expected overnight. Still, some patchy fog may develop, albeit not as widespread and dense as previous nights. A warm front will be lifting northward into Thursday morning. Therefore, it would not be surprising if low temperatures in the low 50s occur closer to midnight followed by some slight warming through dawn as winds shift from east to southeast. Skies will be partly sunny early Thursday driving high temperatures into the mid 70s. As a warm front continues to lift through the region, a few showers could be triggered during the afternoon. 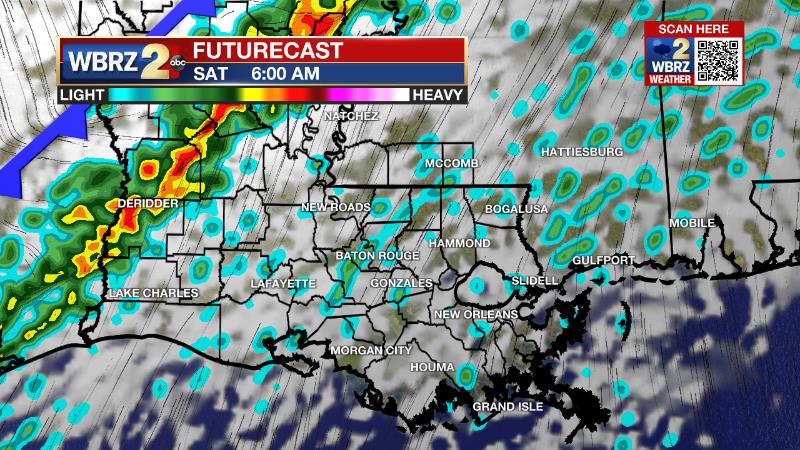 Early Saturday, a strong cold front will push into the area with rain and thunderstorms. At this time, the threat for severe weather seems rather low, but not zero. Skies will clear out by Saturday evening and allow full sun through Sunday. A more distinct cool down will follow for the second half of the weekend and start of next week. However, above average temperatures will quickly return. CLICK HERE for your detailed 7-Day Forecast.

The Explanation: Upper level winds will come out of the southwest on Thursday returning some moisture and with the old front lifting north as a warm front, there seem to be enough factors in place for isolated showers to develop. Thermometers will move well above average Thursday through Friday after the warm front passes. Highs will take a run into record territory in the low 80s on Friday. A deeper upper level trough will cut across the Southern U.S. early Saturday. Over the last two days hours, forecast model guidance has shifted to show more of a neutrally to positively tilted (center is oriented from northeast to southwest) trough, which is less favorable for severe weather. Additionally, the strongest upper level winds needed for expansive storm development will likely remain just north of the local area. Still, enough wind shear and instability may exist for one or two strong storms and a low end severe weather risk. We will get an official outlook from the Storm Prediction Center on Thursday. A stronger cold front will sweep through the area as this trough pushes east Saturday night into Sunday and temperatures will retreat to seasonable averages Sunday and Monday.

A large swath of the Eastern U.S. including the #BatonRouge area has a better than 80% chance of above average temperatures. pic.twitter.com/YrGwFrumLO

This is expected to be short-lived though as an expansive and unseasonably deep upper level ridge builds over the Eastern U.S. next week. Much of the country, including the Baton Rouge area, will have temperatures running about 10-15 degrees above average through the rest of the week.