Some of the hottest temperatures so far this summer are expected on Friday. Meanwhile, the chance for showers has finally dwindled.

Next 24 Hours: Leftover showers will diminish shortly after sunset followed by a mostly clear and muggy night. Low temperatures will struggle to dip much lower than 75 degrees. Though a rogue shower is not impossible, a mainly dry, hot day is anticipated to end the week. High temperatures will surge for the 90s by lunchtime and will top out between 93 and 95 degrees in the afternoon. With ample humidity, feels-like temperatures will range from 104 to 109 degrees. For this reason, the National Weather Service has issued a HEAT ADVISORY. These temperatures are nothing new for the central; Gulf Coast, but given the wet and relatively cool summer thus far, the advisory has been issued out of an abundance of awareness to remain hydrated and not over exert outdoors in the afternoon.

Up Next: Plenty of late July humidity will mean the afternoon hours will have feels-like temperatures in the low 100s right through the weekend. Nights will be sticky and unpleasant in the mid 70s. If you have outdoor plans, it is back to the typical summer routine. While nobody will be washed out, isolated thunderstorms could chase a few indoors during the afternoon hours. Always take shelter inside if you can hear thunder or have lightning within five miles of your location. This status quo pattern will carry into next week. CLICK HERE for your full 7-Day Forecast. 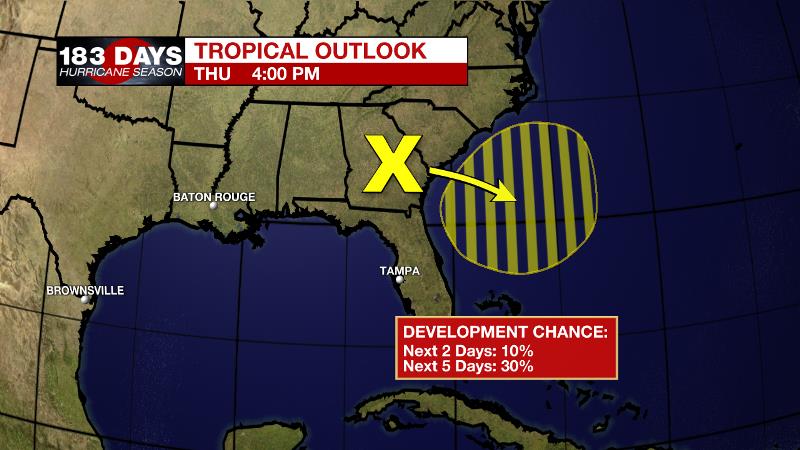 The Tropics: A broad trough of low pressure located over southeast Georgia is expected to move off of the southeastern United States coastline later this evening. Environmental conditions are forecast to be marginally conducive and there is a 30 percent chance of development into early next week while the system drifts slowly offshore of the southeastern United States. For the latest tropical forecasts and information, visit the WBRZ Hurricane Center as we navigate all 183 Days of Hurricane Season.

The Explanation: An upper level ridge of high pressure will build over the region on Friday leading to sinking air and resulting in warmer temperatures and drier conditions. With high temperatures in the mid 90s and dew point temperatures remaining in the middle 70s, it should be no problem for heat indices to exceed 100 degrees. If the number can reach 108 degrees, that would verify the HEAT ADVISORY issued by the National Weather Service. A stray shower is possible due to all of the low level humidity still in place but it will be difficult to find much of anything organized thanks to the subsidence aloft. Heat will remain a story into the weekend although there is a slightly better chance for some isolated, cooling showers in the afternoon. Saturday afternoon, a weak upper level impulse will clip the northeast corner of the forecast area which could trigger some late showers and thunderstorms. At this time, there appears to be a better chance of activity east of the Amite River. By Sunday, a weakened upper level ridge will leave enough instability for daytime warming and the marine breezes to trigger convection during the afternoon hours. Next week may see a bit of relief from “advisory-level” heat index values with a little increase in cloud cover and earlier pop-up showers. Areal coverage likely will not be widespread at any one time but enough of the area will see rain or least associated cloud cover to keep thermometers in check. By Wednesday and Thursday, a weak upper level low is expected to traverse the Gulf from east to west and this could restore scattered daytime showers and thunderstorms for 36 to 48 hours. Still, nights would be largely quiet. As we move into the latter portions of the workweek there are some indications that an upper level ridge will rebuild across the central U.S. with vengeance and really increase the potential for big heat.