A low pressure and cold front will move in from the west late Wednesday, bringing a return of showers and thunderstorms through the latter half of the week. Storm activity will peak Thursday and a few storms could be strong.

Today and Tonight: Similar to Tuesday, expect mostly cloudy skies with high temperatures near 80 degrees on Wednesday. Continued southeast winds may result in a touch of stickiness to the air. Overnight, the build up of cloud cover will continue with low temperatures near 66 degrees.

Up Next:  A cold front will push into the area on Thursday. Rain and thunderstorms are expected, ahead of the boundary and along an associated squall line. Especially with the line, there may be damaging wind gusts and possibly an isolated tornado. The severe weather outlook from the Storm Prediction Center is a 2 out of 5, “slight” risk. Yes, this is our fifth risk of severe weather in about three weeks’ time. Remember to take each risk seriously, as even if severe weather has not affected your home, many of these events have produced damage in parts our forecast area. In addition to this, expect downpours with much of the area receiving 1-2” of rain. As is common along the Gulf Coast, some isolated higher amounts could occur resulting in street and poor drainage flooding. A stray shower will remain possible on Friday. The system will push east of our area by Friday evening, allowing clouds to break up through the night. A beautiful weekend is ahead and outdoor events such as BREC's Pets and Paddling to benefit Friends of the Animals Baton Rouge should be excited! Sunny skies and slightly above average temperatures are in store. Highs will be in the low-to-mid 80s with lows in the low 60s. 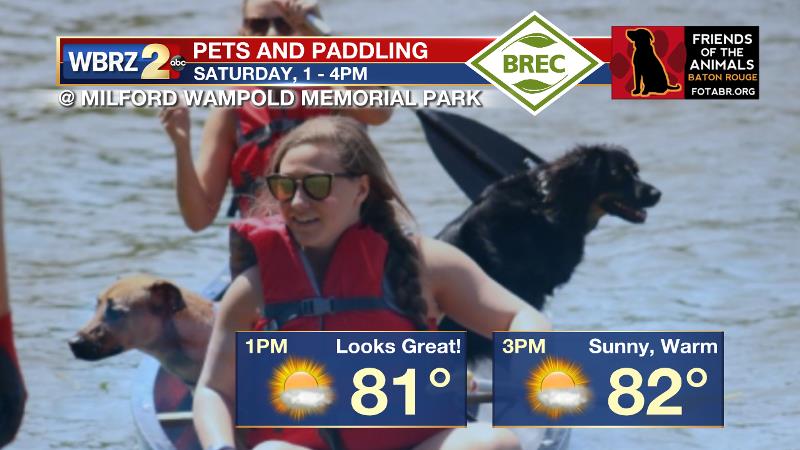 The Mississippi River: At Baton Rouge, major flood stage continues with a level of 40.9’ as of Wednesday morning. Peaking at 44.1’ on March 19, the river set its 7th highest recorded crest at Baton Rouge. In addition, at 109 days this is now the 2nd longest period above flood stage. River flooding and drainage north of the area will keep the river steady over the next several days. The high water is primarily an issue for river traffic and river islands, although some inundation will continue unprotected low-lying areas. The city of Baton Rouge and the main LSU campus are protected by levees up to 47 feet. Some soggy areas and seepage may be noted due to the long duration of high water placing pressure on the levees. As some of the Mississippi River diverts into the Atchafalaya River, gauges at Krotz Springs and Morgan City will stay high as well. This creates backwater flooding in parts of Assumption Parish in areas such as Stephensville and around Lake Palourde. Like Big Muddy, this is expected to be a prolonged event but is not uncommon for the time of year. Read more HERE.

Transitional weather will continue on Wednesday with similar skies and temperatures. An upper-level low will move into the region on Thursday. At the surface, a cold front will move from Texas into the local area. A moist airmass should be in place ahead of the front with dewpoints in the upper 60s. As a result, instability is forecast to develop along and ahead of the front from southern Louisiana into southern Mississippi. Thunderstorms will likely be ongoing along the front on Thursday morning with this convection moving eastward into the Baton Rouge area during the morning hours. Forecast models agree on this timing. Enough wind shear and instability should be available for a few severe thunderstorms. An isolated tornado threat along with potential for damaging wind and hail would exist with the stronger cells. Given the position of the front and parallel orientation of upper level winds, a squall line should develop by afternoon. This feature would create the greatest risk for damaging wind gusts. The Storm Prediction Center as placed the entire 13 Parish, 3 County forecast area in a 2 out of 5, “slight risk” for severe weather. 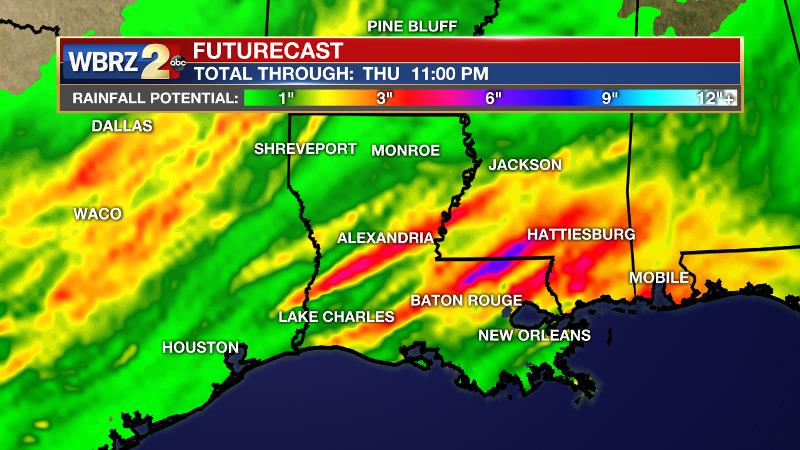 In addition to this, the storm system is expected to slow over our area. Forecast models are showing two distinct bouts of heavier activity, one early in the morning as the system arrives and slows, then another with the squall line as the front kicks through the area during the afternoon. 1-2” of rainfall is expected from storm downpours but as usual in our region, some isolated higher amounts are likely. This could create street and poor drainage flooding as well as rises on fast response streams. An upper level trough will linger over the area on Friday allowing enough instability for isolated showers to develop due to daytime warming. A clear, mild weekend will follow, but it will not be as cool behind that front as this past one. A mid-level ridge will pass over the area Sunday through Monday maintaining a dry, seasonably warm stretch of weather.