Chances for showers and thunderstorms will diminish from north to south through the middle of the week. Slightly more comfortable air is expected to work in for the end of the week.

Next 24 Hours: AS spotty showers and thunderstorms subside, some clearing is anticipated overnight. Low temperatures will be seasonably muggy for early September, dropping into the low 70s. With a weak front stationed across the southeastern half of the forecast area, scattered showers and thunderstorms will stay in the forecast on Tuesday but mainly for those locations closer to the front, south and east of Baton Rouge. High temperatures will be in the upper 80s.

Up Next: A weak disturbance moving northeastward across the Gulf of Mexico may send some added moisture toward coastal areas and locations east of Baton Rouge on Wednesday. With that weak front barricading the most of the area from the deepest moisture, the best chance for isolated showers and thunderstorms will again be south and east of the Capital City. By Thursday, a drier atmosphere will work into the region and allow mainly clear conditions to last through Sunday. Over that four-day stretch expect highs in the upper 80s and low 90s and lows in the upper 60s and low 70s. CLICK HERE for your full 7-Day Forecast. 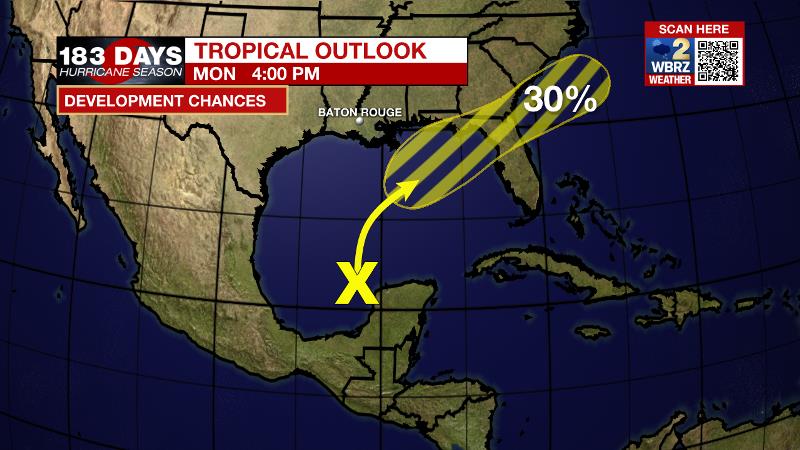 The Tropics: Powerful Hurricane Larry is expected to cause dangerous swells and rip currents from Bermuda, and across the Eastern Seaboard this week. With maximum sustained winds of 120mph, some slight changes in strength are possible over the next few days as Larry moves northwest at 10mph. However, weakening will occur by the end of the week as Larry moves northward into cooler waters.

Disorganized showers and thunderstorms over the northern portion of the Yucatan Peninsula and south-central Gulf of Mexico are associated with a surface trough and an upper-level disturbance. The system is forecast to move slowly northward or northeastward over the central and then northeastern Gulf of Mexico, likely reaching the northern Gulf coast in a few days. Although upper-level winds are currently unfavorable for development to occur, they are expected to become conducive enough to leave a 30 percent chance of formation in a couple of days.

The Explanation: An upper level trough centered over the Great Lakes region will slowly deepen and slide southeastward through the middle of the week. As this occurs, a cold front will be forced across the Southeast U.S. late Wednesday or early Thursday with an area of high pressure building into the Mid-South behind it. Through Wednesday, a weak boundary will be stalled across extreme southeast Louisiana and coast Mississippi. With ample tropical moisture pooled along this zone, scattered showers and thunderstorms will remain possible. Not to say some activity is impossible north of the front but the better chance or coverage in showers and thunderstorms will be closer to the coast. As the axis of that upper level trough and accompanying front swing into the region Wednesday night, the atmosphere will dry out with available moisture going below average for the time of year. From that point forward through Saturday, the dry air should win out to keep showers and thunderstorms to a minimum. The drier air will also mean lower dew points and therefore lower low temperatures. Readings could slip into the upper 60s Wednesday night, but it is more likely that Thursday night and Friday night will have most inland locations dipping below 70 degrees. Recall that dry air warms more efficiently than humid air so highs will still be close to average in the upper 80s and low 90s.