Mars One, and its Intended Reality Show, is Declaring Bankruptcy

It seems that all things Mars has been having a tough time of late. The Mars Opportunity Rover has officially died and is unresponsive, and now the company responsible for Mars One has gone bankrupt. These two missions are about as different as they can be from each other, with some comparing the Mars One campaign with the infamous Fyre Festival. As we’ll see shortly, that comparison is not too far off.

On August 31, 2013 - 202,586 people from around the globe signed up in hopes to become a part of the first, one-way crewed mission to the red planet. In order to apply, applicants needed to fill out a form, and pay a fee of $40. That would amount to a total of $8.1 million in registration fees. Another draw for potential volunteers, was that they would also be a part of a reality show on Mars called “Being There”.  This show would begin with the arrival of 4 individuals to Mars in 2023, with a new team of four joining the colony every 2 years afterward. The show may be quite morbid, as an independent assessment by MIT in 2014 claimed that the first colonists would likely die after 68 days from a combination of suffocation, starvation, dehydration, or incineration in an oxygen-rich atmosphere. 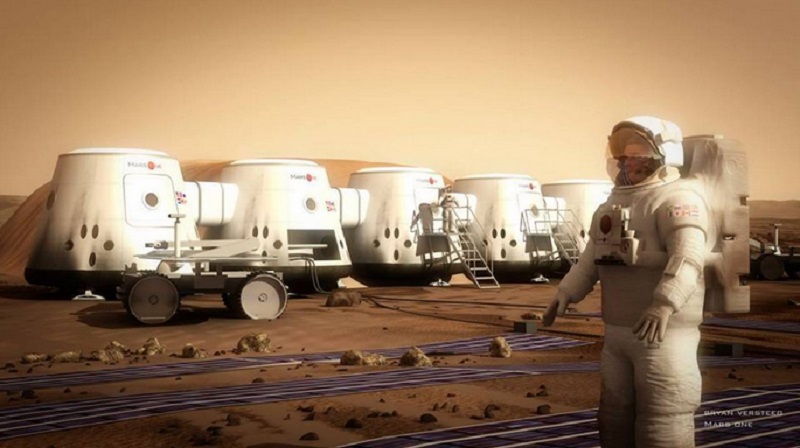 Image: Artist's concept of a Martian astronaut standing outside the Mars One habitat.

There are several claims that Mars One is a scam, only attempting to cash in on the newly commercial space race that SpaceX, Boeing, and Virgin Galactic have made successful. This is highlighted when you look into the company’s CEO, Bas Lansdorp, and begin to follow the money trail. Mars One consists of two entities: Mars One Foundation, which is a non-profit that is in charge of the space mission of getting earthlings to Mars and keeping them alive, and Mars One Ventures, which is the for-profit company that manages the future broadcasting rights and merchandizing of the brand. Another key role for Mars One Ventures was to harvest investors through public trading on the Frankfurt Stock Exchange by signing a reverse take-over agreement with Swiss company InFin Innovative Finance AG in November of 2016. This was regarded as a desperate move, since InFin was already regarded as a defunct mobile payment company. The following month, Mars One announced a €6 million investment from Honk Kong based World Stock & Bond Trade Limited.  Going to Mars is expensive, and by Bas’s estimates of a $6 billion initial mission cost, the newly acquired €6 million was not even a drop in the bucket.

It was expected that after the first four subjects arrived, and the new hit show from Mars took off, merchandising and money from broadcast rights would come pouring in to allow for future missions. Since then the only investor has been with the Swiss firm, Phoenix Enterprises, in July of 2018, which promised the company and investment of €12 million over a twelve month period. It seems that at that point the die had already been cast. Just 7 months later, in early February of 2019, Mars One Ventures declared bankruptcy.

Was Mars One just a passionate dream of its founder, Bas Lansdorp, or was it just created to make millionaires more millions? To answer this question, you just need to head to their website and note their claims and lack of documentation. In 2013, Lockheed Martin was contracted to develop a mission concept study for Mars One’s 2018 uncrewed lander spacecraft, which was to go ahead of humans to map out the location of the colony. Gary Napier, communications manager at Lockheed Martin Space Systems states, “We have concluded the initial contract with Mars One in which we performed mission formulation studies and developed payload interface specifications to support the selection of a payload suite for the unscrewed robotic lander. Currently, Lockheed Martin is not under contract to Mars One.” Lansdorp has also declared that Mars One has a contract with SpaceX in order to use their BFR rockets, but SpaceX denies any ongoing talks or negotiations of a contract.

Image: Artist's rendering of the Mars One Spaceship and habitat capsule.

The bottom line: If it’s too good to be true, it probably is. There is a reason why getting to Mars has been a dream since the 1940’s, when the Nazi rocketeer responsible for the V-2 rocket project, Wernher von Braun, wrote The Mars Project. This detailed his push for a mission to Mars in 1985, consisting of a crew of 70 on ten 4,000 ton spaceships. Disney ended up reaching out to von Braun in 1957, in efforts of helping with several space-focused episodes of the TV show Disneyland, which included one about humans living on Mars. The issues that surround making it to Mars is still numerous, including various issues resulting from an 8 month journey just to get to the red planet. This does not even touch on the problems that a Mars colony poise to engineers and scientists. Even after getting on the 4th rock from the sun, you still have to get back, on another 8 month journey back to Earth. That could mean almost 2 years in space under a zero to low gravity environment. Everything is possible, but NASA is not even entertaining the thought until 2030.