Residual moisture from a departing Tropical Storm Hanna will keep an active, wet pattern in place through the weekend. By Monday night, 1 – 2 inches of rain is expected for areas north of I-12, with 2 – 3 inches for areas south of I-10. Tropical showers can be very efficient rainmakers, so a few isolated locations that experience multiple storm downpours could have some street and poor drainage flooding. Locally, Hanna will not produce any serious wind inland outside of thunderstorm gusts.

The Next 24 Hours: While showers will taper overnight, they are not expected to diminish entirely. Skies will partially clear but some clouds will hold. Look for lows in the mid 70s. Saturday may not be quite as busy as Friday, but widespread showers and thunderstorms are still the call. Activity will ramp up through the mid-morning hours. Highs may briefly nip the mid 80s before the increase of clouds and showers. 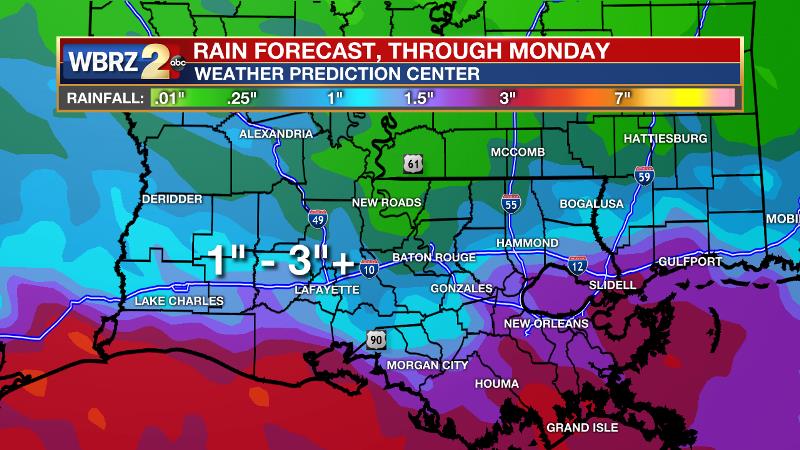 The Long Term Trend: Lingering moisture from Hanna and continued instability in the atmosphere will mean that Sunday and Monday look to be repeats of Saturday. That is, mostly cloudy skies with widespread showers and thunderstorms. Any given day, approximately 60 – 80 percent of the 13 Parish, 3 County forecast area will receive rain, perhaps in one or two rounds. The added rain may keep high temperatures out of the 90s on several afternoons. The next sign of a pattern change back to “normal” isolated afternoon showers and hot temperatures is not until the latter half of next week.

The Tropics: Here is the latest on the tropics, as of 4pm Friday. Follow WBRZ Weather on Facebook and Twitter for the latest advisories or download the WBRZ WX App. to track storms on your mobile device. 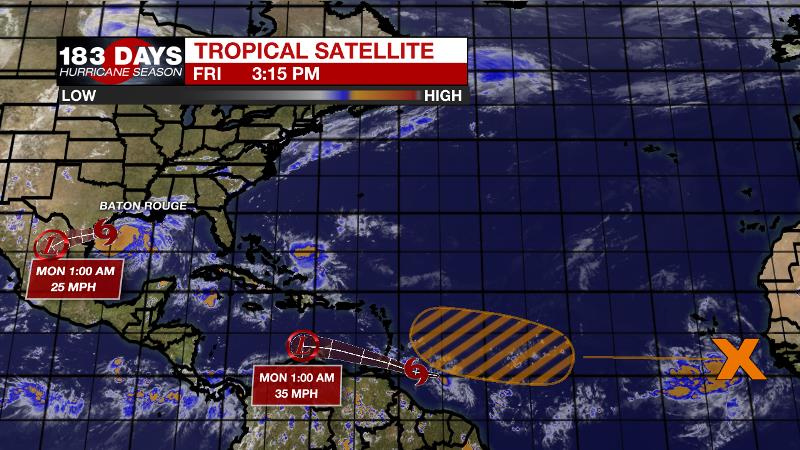 1. Tropical Storm Hanna was 190 miles east of Port Mansfield, Texas moving to the west at 10mph with maximum sustained winds of 50mph. Hanna is expected to continue on a similar path and strengthen to a category one hurricane before making a landfall in Texas on Saturday. Hurricane Warnings have been posted from Baffin Bay to Mesquite Bay, Texas. In addition to 1 – 4 feet of storm surge along the coast, the storm will produce winds in excess of 75mph and 5 – 10 inches of rain in and around the hurricane warnings areas.

2. Tropical Storm Gonzalo was 390 miles east of the Windward Islands moving west at 15mph with maximum sustained winds of 40mph. Gonzalo is expected to continue west and accelerate and over the weekend with minor changes in strength possible. It is a very small storm, with winds only extending 25 miles out from the center. A tropical storm warning has been posted for Barbados, St. Vincent and the Grenadines, Tobago and Grenada. The storm is expected to dissipate in the Caribbean Sea early next week.

3. A tropical wave near the coast of Africa is expected to emerge in the eastern Atlantic in the coming days. There is a 40 percent chance of development over the next 5 days.

The Explanation: Tropical Storm Hanna will exert an influence on our weather through Saturday. The greatest impacts from it will be over coastal and offshore areas. These locations could experience breezy conditions and tides 1-2 feet above normal. Inland, strong southeasterly winds in the low levels will create a moisture rich atmosphere. Combined with cooler air aloft, widespread rain and thunderstorms will develop. Since the central low will be well south of the area, it will take daytime warming and marine breezes to kick out showers and thunderstorms so most of the activity will occur around and after midday. The heaviest amounts will be focused from I-10 south to the coast. By Sunday, Hanna will depart to the southwest but very high moisture content will remain, while a persistent trough of low pressure aloft will maintain cooler, more unstable air. This will likely keep scattered to widespread showers and thunderstorms in the picture well into next week. Timing additional batches of rain may come on a day-to-day basis as weak upper level disturbances move over the area. Added cloud cover and precipitation in the area will hold high temperatures in the 80s most days. No major changes to dew point temperatures in the low to mid 70s will keep low temperatures in that range. There are signs that the trough will release by the middle of next week but, moisture will stay along with plenty of instability so showers and thunderstorm will not vanish entirely, rather come down in numbers.