Temperatures will remain cool to end the week. A storm system will develop in the western Gulf of Mexico and add some rain to the mix this weekend.

On Wednesday, the National Weather Service upgraded their rating on the Liberty, Amite County tornado to EF-3. Maximum winds reach 140mph with a 20-mile long and half-mile wide damage path.  This was the first EF-3 tornado to affect the southwest Mississippi portion of the WBRZ Weather forecast area since the December 13, 1977 Gillsburg tornado. The last EF-3 tornado to affect any part of the 13 Parish, 3 County WBRZ Weather forecast area was in Weiss and Watson Livingston Parish on February 7, 2017.

NEW: @NWSNewOrleans upgrades Liberty, Ms. tornado to EF-3 | This is the strongest tornado to strike @WBRZweather's portion of S.W. Ms. since the Dec. 13, 1977 Gillsburg tornado. The last EF-3 in the entire @WBRZweather forecast area was Feb. 7, 2017 in the Weiss/Watson area. pic.twitter.com/WK6QcD70Iw

Today and Tonight: Another afternoon of ample sunshine is ahead. Only a few thin clouds could develop by late afternoon. High temperatures will top out in the upper 50s with light northeast winds. Overnight, clouds will begin to build in from the west. Their arrival will have an impact on low temperatures. Areas that receive clouds first will stop in the upper 30s, while those that stay mostly clear, closer to I-55, will fall into the low 30s.

Up Next: In advance of the next storm system, high clouds will overspread the area on Friday. This will limit high temperatures to the 50s. The atmosphere will continue to saturate into the weekend and areas of rain are expected to break out on Saturday and continue into at least early Sunday. Elevated winds are expected as well. Socked into cloud cover with periodic precipitation, small temperature ranges are expected with lows in the mid to upper 40s and highs in the mid to upper 50s. Sunshine will return for Monday and Tuesday, with quiet weather into Christmas. Temperatures will be a bit above average with highs near 70 and lows in the low to mid 40s. 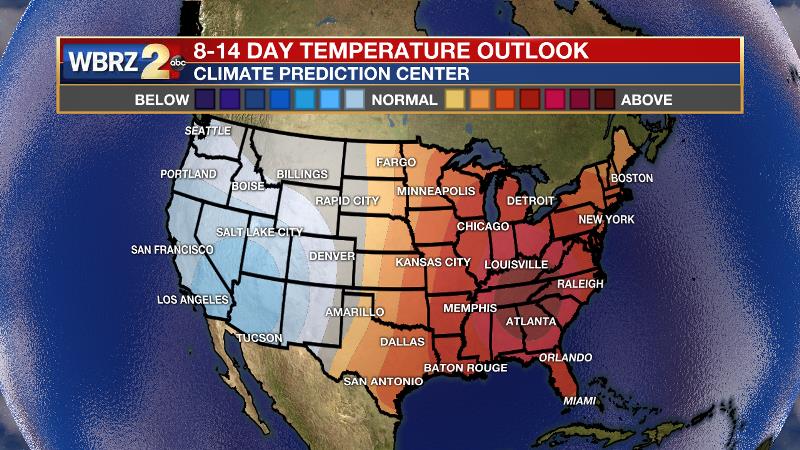 A broad area of surface high pressure will traverse the region through Thursday leading to another afternoon of clear skies and light winds. Temperatures will attempt to make a run at 60 degrees but sue to the cold starting point, unlikely that many will reach this mark. A shortwave trough of low pressure will push across the Midwest and dislodge from the jet stream as a cut off upper level low over Texas on Friday. Initially, ample positive vorticity advection and a southwest to northeast stream of mid-level moisture from the Gulf of Mexico will result in a deck of cirrus clouds overspread the region on Friday. Therefore, temperatures will be limited and will struggle to reach 60 degrees. 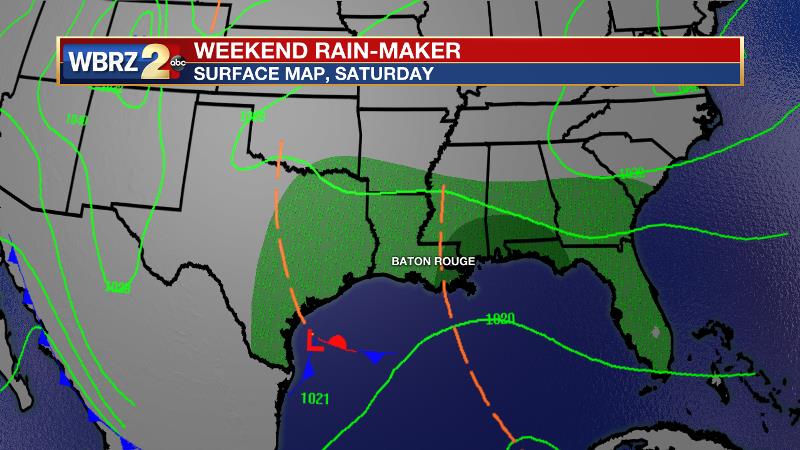 A surface low will develop near the baroclinic zone of southeast Texas and emerge into the central Gulf of Mexico. Forecast models have some differences in the path of the upper level low and surface low. The GFS model shows a slightly farther south and faster pass across the Gulf. This scenario would result in breezy conditions with clouds and showers Saturday into the first half of Sunday. The ECMWF shows a more northern and slower route across the Gulf. The scenario would result in windy conditions with periods of rain—some of which could be heavy. In either case, a rather dreary weekend is ahead. There is agreement that the local area will remain on the cool, northern side of the system so it will be cool through the weekend with highs in the mid to upper 50s and lows in the mid to upper 40s. Behind this system, an upper level ridge will move across the region leading to clearer and warmer conditions for the first half of next week. At this time, the weather for Christmas looks quiet with slightly above average temperatures—not quite to some of the record readings experience over the last 5 years.