Army officials say if you get a 'draft' notice via text, it's fake

The U.S. Army is warning citizens that a host of Americans have been getting bogus texts saying they've been selected for a military draft and must report to Iran.

The Army says these texts are fake and a draft is not in effect.

The fraudulent messages may be a result of escalating tensions between the U.S. and Iranian leaders.

Last week, the U.S. sanctioned a drone strike that killed top Iranian military leader, Gen. Qassem Solemani and on Tuesday of this week, the country retaliated by sending more than a dozen missiles at two U.S. air bases in Iraq.

Army officials issued a statement, saying, "U.S. Army Recruiting Command has received multiple calls and emails about these fake text messages and wants to ensure Americans understand these texts are false and were not initiated by this command or the U.S. Army."

According to National Public Radio, the decision to enact a draft is not made at or by U.S. Army Recruiting Command.

Instead, it's made by the Selective Service System, which is a separate agency outside of the Department of Defense.

Just below is a screen shot of the phony message officials are warning citizens to ignore. 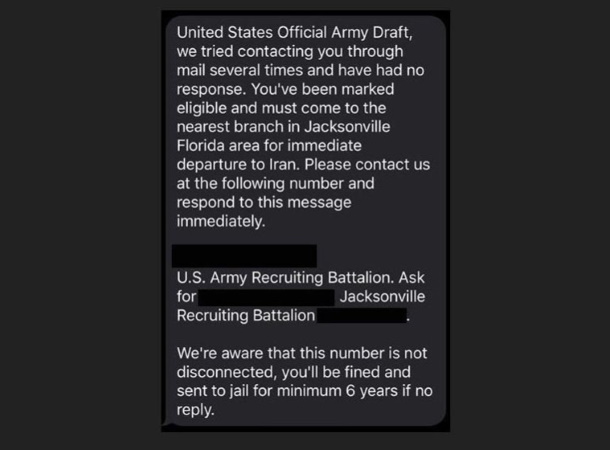 The draft has not been held since 1973 and the military has been comprised of volunteers since that year.