For the first time in more than two weeks, rain measured up over parts of the WBRZ Weather Forecast Area. A weak front will barely cross the area on Thursday bringing some slight changes to the weather into the weekend.

Next 24 Hours: Showers are expected to decrease in coverage into the evening hours thanks to the loss of daytime warming and the instability it creates. Light southeasterly winds will persist and maintain a muggy feel into Thursday morning with low temperatures in the upper 60s. Additionally, the unseasonable moisture coupled with partially clearing skies will allow some patchy fog to form. Gradual warming, with high temperatures chasing the mid 80s will cause fog to dissipate by mid-morning. Skies will be partly sunny, but as weak front crawls through the area, a stray shower could be churned up, especially east of the Mississippi River.

Up Next: On the other side of that front, Friday into the weekend, humidity will go a bit lower but temperatures are expected to remain above their seasonal averages of highs near 80 and lows near 57. In other words, it will not be as cool behind this front as the one last weekend. However, rain chances will stay very low making for largely cooperative outdoor weather through Saturday. Continue to check in with the forecast for Sunday and Monday if you have outdoor plans, as it is unclear whether or not a fast moving disturbance will send a round of showers and thunderstorms through the area. Beyond that, Tuesday is expected to be dry followed by a more substantial storm system and a better chance for cooler temperatures for the middle and end of next week. CLICK HERE for your full 7-Day Forecast. 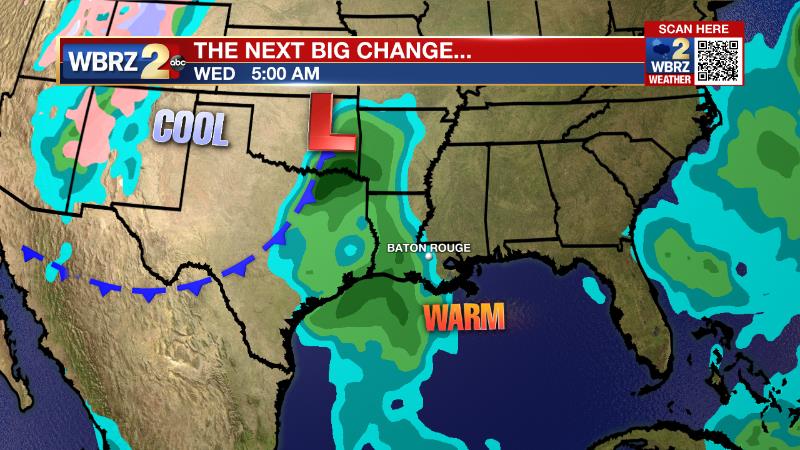 The Tropics: For the North Atlantic, Caribbean Sea and Gulf of Mexico, tropical development is not expected over the next five days. As we move into late October, it is increasingly rare for tropical systems to strike Louisiana. In fact, with records dating back to the 1860s, only four storms have made landfall past October 20. For the latest tropical forecasts, advisories and information, visit the WBRZ Hurricane Center as we navigate all 183 Days of Hurricane Season.

The Explanation: Into Wednesday night, drier air will begin to mix into the atmosphere lessening coverage in showers and thunderstorms. Plenty of moisture will remain at the surface though and with clearing skies and light, southeast winds some fog is possible near daybreak Thursday. The axis of weak upper level trough that is well north of the area will swing through Thursday morning with an associated weak surface boundary. There could be a few showers immediately along this boundary, primarily east of the Mississippi River. More stable and a deeper drier air mass will take hold Thursday night into Friday. Through Saturday, more pleasant conditions are expected with lower humidity and limited cloud development. Take note that temperatures will not cool much behind the weak front and should remain above average through the extended forecast. With regard to precipitation, uncertainty increases Sunday through Tuesday. The ECMWF model suggests a fast moving upper level trough will cut across the area early Monday with a round of showers and thunderstorms. The GFS model is not finding this feature and would result in continued dry, warm weather. Then on Wednesday, both models come back into agreement in bringing a deeper upper level trough into the region. This system will be accompanied be a more demonstrable cold front. At about a week out, there are some timing clarifications needed but the main idea is that falling temperatures can be expected around midweek. Additionally, the track of the parent, upper level storm system requires at least some monitoring for stronger thunderstorms.