Once a line of rain and thunderstorms passes through during the evening hours, we can expect dry weather to end the workweek. However, a longer, soaking rain will arrive just as the weekend begins.

Tonight & Tomorrow: A cold front will approach from the west during the evening hours. A line of rain and thunderstorms is expected to cross the area between 8pm – 1am, timed out to be in Baton Rouge around 11pm. There is a shot at one or two gusty thunderstorms, but significant severe weather is not anticipated as the line will be weakening while moving through. After the front passes, winds will shift to the northwest but remain gusty at 10-15mph. Low temperatures will ultimately settle in the mid 50s. Thursday will stay breezy with northerly winds of 10-15mph. High temperatures will feel much more like January though, topping out in the mid to upper 60s beneath mostly sunny skies.

Up Next: Temperatures will move from the mid 40s to low 60s on Friday but will not warm further as clouds quickly return during the afternoon hours. A broad swath of rain is expected to form in the Gulf of Mexico and slowly pass from west to east throughout Saturday. As a result, the first half of the weekend looks like washout with about two inches of rain falling in most locations. Thanks to the damp conditions, it will stay chilly with lows in the upper 40s and highs just a few degrees warmer. The showers will wrap up during the first half of Sunday with some sun possible before the weekend is over. Another soaking rain is possible on Tuesday.

Detailed Forecast: An upper level low pressure and associated surface low and cold front will strengthen as they move eastward across the Central Plains and into the Southeast overnight. With the upper and surface low centered so far north of the local area, ingredients for severe weather are marginal, at best, in the local area. Both wind shear and instability are limited with instability only waning further as a line of storms approaches after nightfall and past peak solar heating. The squall line will reach parishes and counties northwest of Baton Rouge around 8pm, the Capital City around 11pm and I-55 by about 1am. Precipitation will end before dawn Thursday with a post-frontal air mass arriving through the day on the heels of northwest winds of 10-15mph. After one sunny afternoon, clouds will quickly increase on Friday as a surface low forms at the tail end of the front near the coast of Texas. 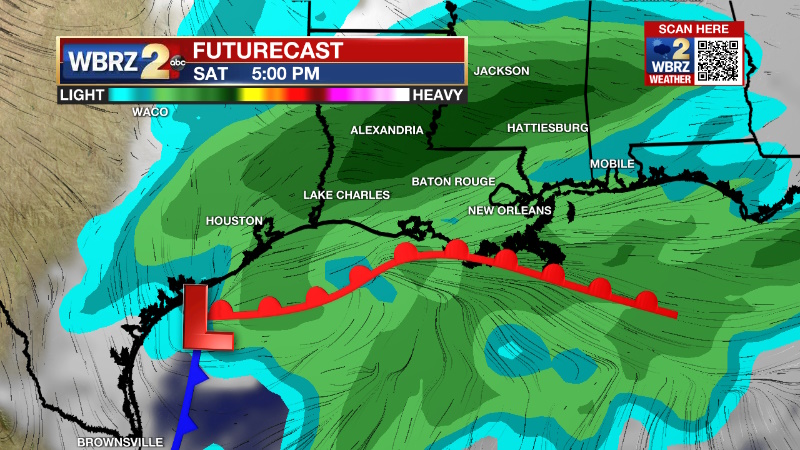 This low will help to lift moisture into the central Gulf Coast with a shield of rain overspreading the area to begin the weekend. Thanks to the dreary weather, there will be a small range in temperatures on Saturday with lows in the upper 40s and highs in the low 50s. While some rumbles of thunder could occur on Saturday, any organized thunderstorms will stay well offshore. After an inch or two in most neighborhoods, rain will end from west to east on Sunday morning. A decrease in cloud cover is expected late in the weekend as a brief upper level ridge passes over the region allowing a quiet beginning to the new week. Given the lower amplification of the ridge and mainly clear skies, temperatures will be a little closer to average Monday with morning lows in the low 40s and afternoon highs in the low 60s. Another rain event is expected on Tuesday. It is too early to iron out specific details but the track of the associated surface low will be important. Farther north will bring a threat for severe weather. Farther south will mean just another rainy day.