A record high temperature was set on Wednesday afternoon as thermometers soared up to 85 degrees in Baton Rouge. The previous mark was 82 degrees in 1909. A record high will be within reach on Thursday (84, 2018) as well.

A *DENSE FOG ADVISORY* has been issued for parishes along and south of I-12 from 12am to 10am Thursday. Visibility could be reduced to ¼ of a mile or less at times, causing slow and hazardous driving conditions. It is recommended that you slow down and use low beam headlights.

Next 24 Hours: A pesky cold front has essentially stalled across the forecast area leaving a very tricky temperature forecast. With cooler air hugging the boundary tightly, some locations north and west of Baton Rouge will drop into the 50s tonight, while the city remains in the low to mid 60s and areas south and east of Baton Rouge stay in the low 70s. Fog may develop in the coastal areas once again. That front will remain stalled on Thursday with partly sunny skies and warm temperatures for all, except the extreme northwestern corner of the forecast area, like Wilkinson County. Metro Baton Rouge will make it into the low 80s once again. The front will finally start to move south during the evening hours with a few showers.

Up Next: As the slow moving cold front crawls through on Thursday night and Friday, expect mainly cloudy skies and isolated showers. A full frontal passage should lead to cooler air Friday afternoon into the weekend. However, skies may not clear entirely and quite a bit of cloud cover is expected to remain. A reinforcing front will come by with more clouds and isolated showers on Sunday. This front will be more progressive and provide drier, comfortable conditions for Lundi Gras and Mardi Gras. As far as the weekend parades go, skies may not be bright and blue, but there should not be any major issues rolling. We’ll keep an eye on those showers, Sunday. CLICK HERE for your detailed 7-Day Forecast. 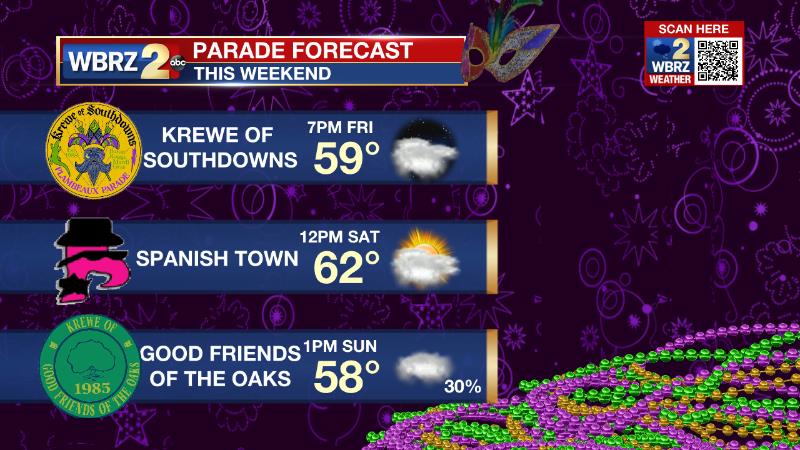 The Explanation: A cold front has stalled across the northern half of the forecast area. For Metro Baton Rouge, south and east of the front, high dew point temperatures above the nearshore water temperatures will lead to another night of sea fog. Little change is expected on Thursday. As morning fog diminishes, a few breaks in the low cloud deck will help warm temperatures right back into the upper 70s and low 80s.  By the afternoon, a deeper upper level trough over the Western U.S. will race east and start to push that cold front through. A few showers will develop late in the day but especially overnight into Friday. With minimal instability and weak upper level winds, thunderstorms are not expected. Some of these showers could linger across the area Friday as skies stay mostly cloudy. Cooler air will spill in behind the front as winds shift out of the north. The cold front will stall in the Gulf of Mexico while upper level winds stay out of the southwest. These winds flowing over the front will create a persistent cloud deck over the region. A reinforcing cold front will swing through the area on Sunday with another pocket of clouds and showers. This one will send temperatures down a few more degrees into early next week, but more importantly, dry out the atmosphere just in time for carnival festivities Monday and Tuesday.