Watching more warmth and the southern Gulf next week

An upper level ridge will keep highs in the 90s and lows in the low 70s through the end of the week. If any showers can manage to develop they should mostly stay south of I-10.

Up Next: Dew points are forecast to stay elevated in the mid 70s allowing high afternoon humidity and uncomfortably sticky nights. By the weekend, a bit more instability in the atmosphere may allow scattered showers and thunderstorms to develop further inland, but we still are not expecting any particularly busy days on radar. Overall, the same general trend is pegged to continue well into next week. There are no signs of significant cool air in the Southeast and the Climate Prediction Center maintains high probability for above average temperatures through mid-October.

The Tropics: Hurricane Leslie is positioned well east of Bermuda, but close enough to create large swells and high surf. With 80mph winds, the storm will continue north at 5-10mph through the week, followed by a sharp turn east over the weekend. As this occurs, gradual weakening is expected. 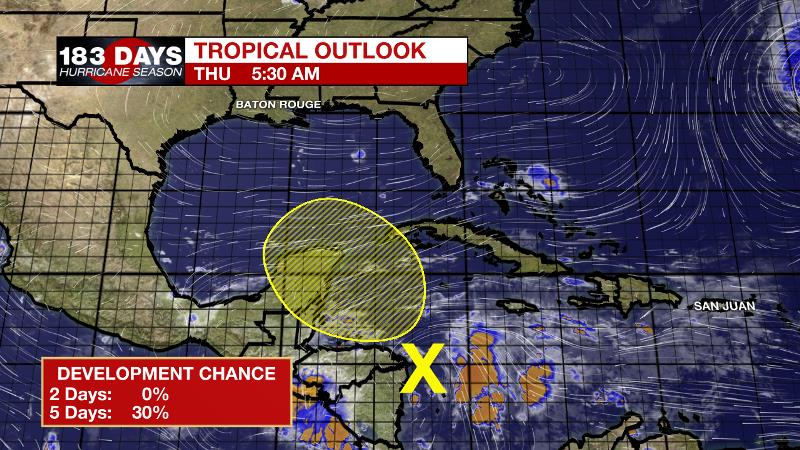 A broad area of low pressure, typical of this time of the year, covers a portion of Central America and the western Caribbean Sea.  This system is accompanied by an extensive area of disorganized clouds, showers and thunderstorms, and although surface pressures are relatively low in the area, upper-level winds are highly unfavorable for tropical cyclone formation. However, environmental conditions could become less hostile over the weekend and early next week, allowing for some slow development in this region as the system drifts northwestward. 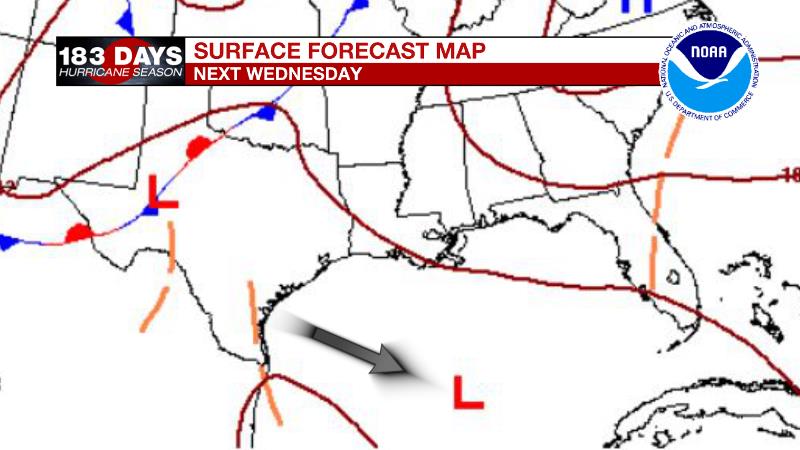 The National Weather Service Weather Prediction Center indicates a surface low pressure on their forecast surface map by the middle of next week and there are now some models acknowledging a more organized system. However, with no storm yet developed, it is too early to place much stock on model solutions and far too early for any specifics. Historically, tropical activity has a secondary peak in Mid-October with the western Caribbean Sea and Gulf of Mexico the favored development areas, so this is just more reminder to keep preparedness plans in mind until the season is officially over. 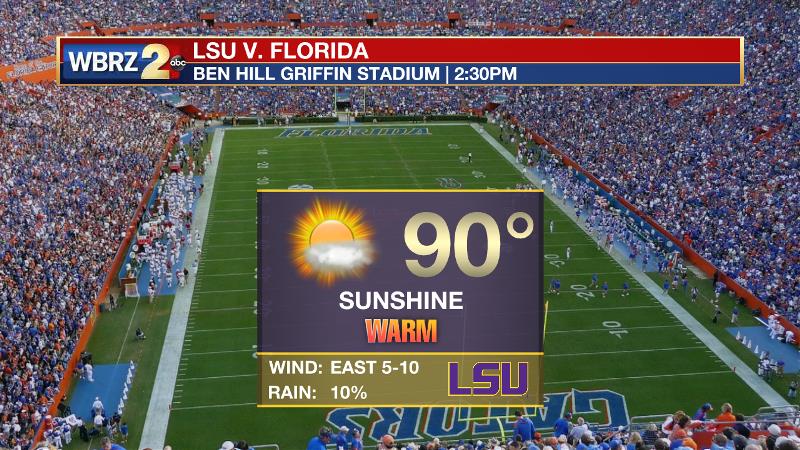 An upper level ridge will remain centered over the forecast area into Friday. Subsidence will lead to drier conditions, more sunshine and warmer temperatures. Light, east-southeast winds broadly circulating around a surface high pressure system anchored over the Carolinas will lead to continued onshore flow and well above average dew point temperatures in the low 70s. This will keep nights sticky and afternoons oppressively warm and humid. By the weekend, the upper level ridge will slide eastward and the atmosphere will uncap a bit. More convective coverage is anticipated for Saturday as this occurs and slightly deeper moisture sets up in the atmosphere. By early next week, the large scale, upper level pattern will amplify further with a deep trough in the west and a large ridge in the east. Eventually, it would seem reasonable that a lobe of cooler air aloft could break away from this trough and guide a cold front through our area, but there are no such signals in the next 7-10 days. Either way, we are indeed overdue.