A much quieter week is ahead. Though rain chances are not zero, any showers should be isolated and passing.

Next 24 Hours: The nighttime hours will remain largely quiet with just a few clouds, low temperatures in the upper 60s and east winds of 5-10mph. There is a shot at some patchy fog formation but it should not become dense. Winds should start to slacken enough on Tuesday to slowly alleviate lingering flooding issues along the Amite River and Lake Maurepas. Mostly sunny skies early will give way to some vertical cloud development and perhaps a spotty shower or thunderstorms during the afternoon hours as high temperatures peak in the mid 80s. 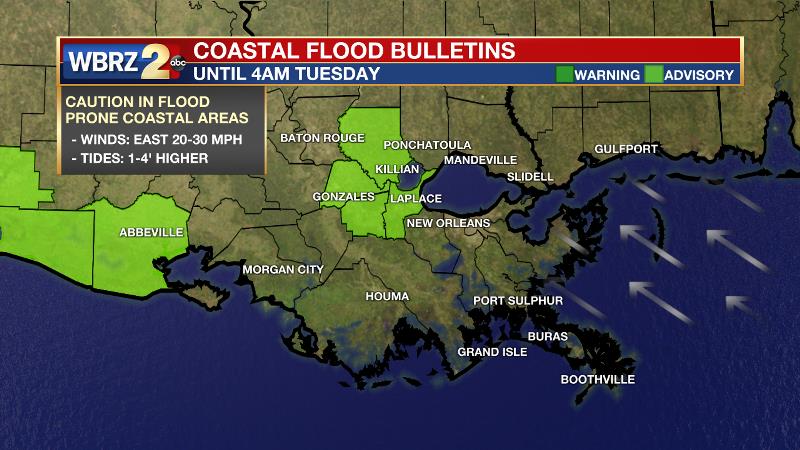 Up Next: Once again, on Wednesday, there may be just enough instability for isolated, afternoon showers and thunderstorms as highs reach for the mid 80s. Thursday and Friday are expected to be mainly dry and seasonably warm with lows in the upper 60s and highs in the upper 80s. Of the two weekend days, Saturday bring a slightly better chance for a shower than Sunday but coverage should remain low in the 20 percent range. The 7-day rainfall forecast is for less than a half inch around the forecast area, which may be a welcome dry period after last week’s deluge. CLICK HERE for your full 7-Day Forecast.

The Tropics: There are currently no areas of interest in the Gulf of Mexico, Caribbean Sea or Atlantic Ocean. No tropical development is expected over the next five days. Be sure to visit the WBRZ Hurricane Center as we prepare for 183 Days of Hurricane Season.

The Explanation: A ridge of high pressure positioned over the Southeast U.S. will be broken down by a weak upper level trough approaching from the west on Tuesday and Wednesday. Additionally, precipitable water, or available moisture in the atmosphere, will increase to above average levels. The retreat of the ridge and added moisture will result in enough instability aloft for daytime warming to instigate some very isolated shower activity, mainly west of I-55. The upper level trough will pass northeast of the region to end the week and rain chances will slip back toward zero. A stronger upper level trough may make a little better southeastward progress across the country on Saturday and Sunday unlidding the atmosphere for more isolated or even scattered showers and thunderstorms—especially if the trough can drive a front into the area. It is too far out to tell if that front will sneak into the Gulf, which is increasingly less likely this time of year. If it can, we could get one of our final reductions in humidity before the summer sweats set in.