Two names you may hear while dodging storms this weekend

The forecast remains tricky and dependent on the positioning of a surface trough. As it goes, so too will go showers and thunderstorms through the weekend. Meanwhile, the deep tropics are waking up and one or two storms may be named by the middle of next week.

Today and Tonight: Friday continues to look as though the area will be split from north to south. Scattered showers and thunderstorms should be heavier and more frequent closer to the coast. North of I-12, activity will be a bit more isolated. More sunshine for those areas will allow high temperatures into the upper 80s. Overnight, skies will stay mostly cloudy but most, if not all, of the showers will end. Low temperatures will stop in the mid 70s. 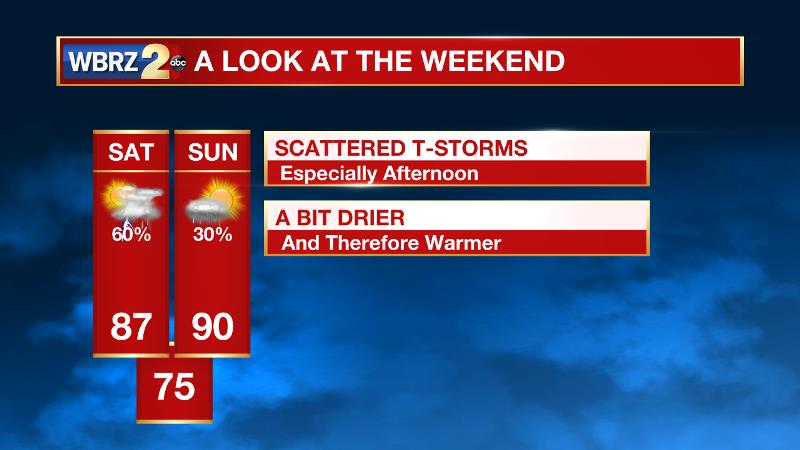 The Tropics: the deep tropics seem to be awakening with two waves worth monitoring. Invest 90L is in the Caribbean Sea and has a 50 percent chance of further development. Invest 99L is in the far east Atlantic Ocean and has an 80 percent chance of organizing. The next two storm names on the list are Franklin and Gert. For much more in depth information about these systems, CLICK HERE. 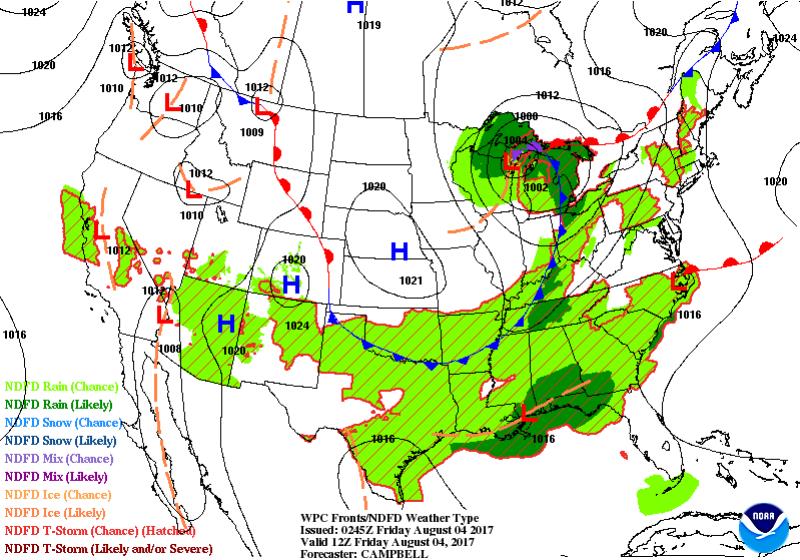 As a stubborn surface trough remains parked along the Louisiana Coast, rain coverage has been more concentrated south of I-10. As little change is expected on Friday, rain chances will remain highest in parishes close to the Gulf and lowest for the counties of Southwest Mississippi. Saturday should see a slight shift in the pattern as the axis of higher convective potential shifts further inland. The trough will push farther north bringing higher rain chances to the Baton Rouge area. Both days, high temperatures are expected to remain in the mid to upper 80s, with higher numbers occurring in the few areas that still rain free. By Sunday, a weak ridge will result in a more typical August day across the central Gulf Coast. Temperatures will warm back closer to 90 degrees, and rain chances will be closer to average between 30 and 40 percent from late morning through the afternoon hours. Caught in between any significant ridging or troughing, this same general pattern will continue through the middle of next week.