Wednesday will be the most active of the forecast period. However, brisk winds could still create some issues as we end the week.

Next 24 Hours: After a pleasant, warm day across the Capital Area, expect clouds to build up overnight with thermometers ending up in the mid 60s due to increasing humidity. Wednesday morning could start with some low clouds and scattered showers around. These will substantially affect the forecast for later in the day. In short, more morning activity could lead to less of a severe weather threat later in the day. However, if the atmosphere remains untapped as highs stretch for 80 degrees, a strong line of thunderstorms could produce gusty wind and brief tornadoes later in the day. As of now, a cold front is expected to send a squall line from west to east through the area between 1pm – 7pm. In addition to strong storms, brief downpours could cause some standing water issues as well. If you are a traditional commuter, stay in touch with the forecast, as the rush hour could be rather treacherous. 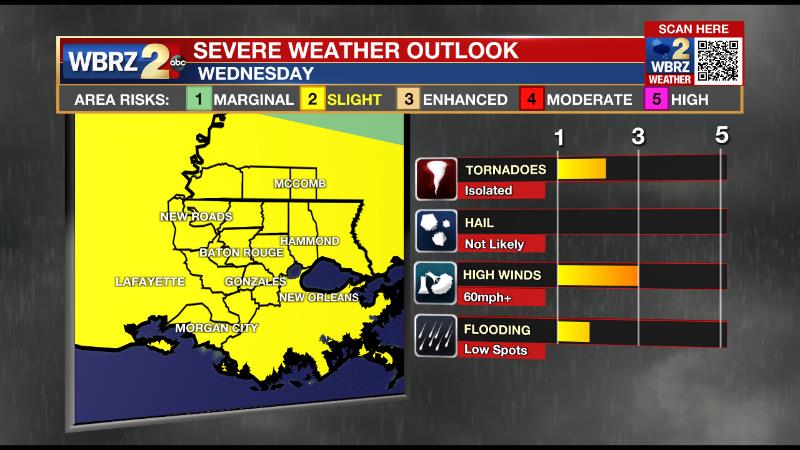 Reminder: With the threat for impactful weather—severe thunderstorms and heavy rain—please have access to alerts through Wednesday evening. You can download or activate the WBRZ WX App on your Apple or Android device or turn on a NOAA Weather Radio for bulletins such as watches and urgent warnings. Of course, WBRZ, WBRZ+ and the Cable Weather Channel will have updates as active weather dictates.

Up Next: Behind the front, it will become breezy, cooler and drier. Thursday and Friday will feature lows in the low to mid 50s and highs in the upper 60s to low 70s. While many have been awaiting the cooler and drier air, the wind may seem a little less welcome. Thursday will have sustained winds of 15-25mph with gusts over 35mph and Friday will have 10-20mph winds. Such gusty conditions can be enough to snap weak branches and create some spotty power outages. The winds will subside into the weekend and after a Saturday morning in the upper 40s, seasonable and pleasant conditions are in store through Sunday. CLICK HERE for your full 7-Day Forecast.

Forecast focus is on strong storms tomorrow and then cooler temperatures... but don't sleep on winds after this front. They will be sustained at 15-25mph with gusts over 35mph possible Thursday. We certainly have had tree and powerline issues with similar winds. #LaWX #MsWX pic.twitter.com/YKPrQOO9JY

The Tropics: A deepening, non-tropical low pressure system has a 40 percent chance of formation as it moves away from the Northeast U.S. later this week.

As we move into late October, it is increasingly rare for tropical systems to strike Louisiana. In fact, with records dating back to the 1860s, only four storms have made landfall past October 20. For the latest tropical forecasts, advisories and information, visit the WBRZ Hurricane Center as we navigate all 183 Days of Hurricane Season.

The Explanation: A deepening upper level trough, associated strong surface storm system and attendant cold front will move out of eastern Texas and into western Louisiana early on Wednesday. Through the morning hours, moisture will move inland from the Gulf of Mexico along with a warm front ahead of that potent cold front. Some daytime warming will aid in destabilizing the atmosphere by Wednesday afternoon, especially along and south of the interstates. As is common with fall, winter and spring continental storm systems, wind shear will be strong and supportive of organized storms. In this case, a squall line is the most likely mode of the activity along which damaging wind gusts would be the main threat. There could be just enough instability for one or two discrete storm cells to form ahead of the line and produce tornadoes. Regardless of the storm form, there will be enough shear for some rotation in any thunderstorms. Even after the line passes through the area, the storm system will continue to bring impacts. The actual cold front will be lagging the squall line by a few hours but could develop a thin line of showers just before passing Wednesday night. Moisture wrapping into the surface low pressure system north of our area could cause stubborn clouds to linger, especially north of the interstates, on Thursday. Should the clouds be thicker, highs could end up a good 5-10 degrees lower than our current forecast. Due to a sharp difference in temperature and therefore steep pressure gradient, winds will be elevated well into the end of the week. Sustained winds of 15-25mph are possible on Thursday and could remain at 10-20mph on Friday. Gusts over 35mph are possible. Certainly, the area has seen branches and powerlines come down in similar winds, so be aware of that ongoing threat in seemingly “nicer” weather. These stiff winds will also usher in much cooler and drier air, but in keeping the atmosphere stirred up, low temperatures may not go as low as possible Friday and Saturday mornings. Still, temperatures will be a good 5 degrees or more below average through the weekend.