High heat and low air quality will be the story through most of this week. Temperatures could actually get hotter toward the end of the forecast period.

Next 24 Hours: It is tough to cool down when days in the mid 90s turn into nights that stay in the mid to upper 70s—but that is expected again into Wednesday. Plenty of early sunshine will drive high temperatures up to about 96 degrees with feels-like temperatures again over 100 degrees. There could be a stray shower or thunderstorm but most locations will not benefit from any cooling rain. 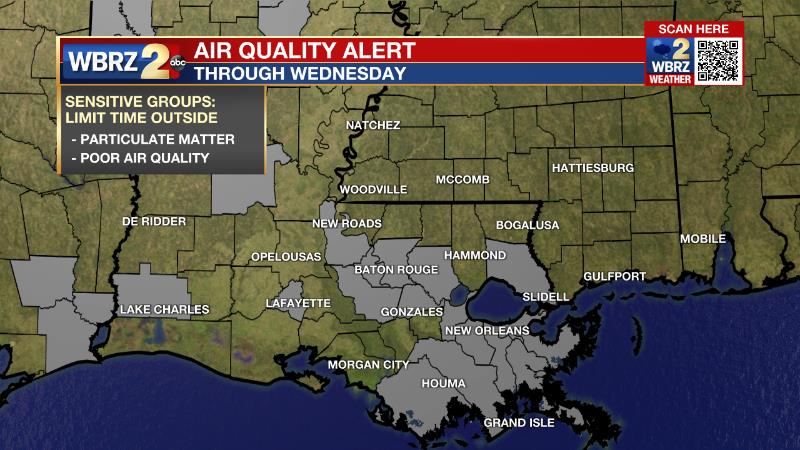 An Air Quality Alert will be in effect for the Capital Area on Wednesday. Southwesterly winds will continue to transport Saharan dust across Louisiana. In addition, a ridge of high pressure aloft, which is also causing very hot temperatures, will limit atmospheric mixing each day. These conditions will result in air quality that is Unhealthy for Sensitive Groups. By Friday, winds are expected to become more south-southeasterly, pushing the highest concentrations of dust west of Louisiana.

Up Next: Warmth will remain the weather story through the middle of the week. Expect high temperatures in the mid 90s and low temperatures in the mid 70s. While the feels-like temperatures may ultimately check in just below the heat advisory criteria of 108 degrees, you should take the usual hot weather precautions of staying hydrated and wearing light, loose clothing. By Friday and Saturday, there may be an opening for slightly more afternoon showers and thunderstorms to form, but we are not currently expecting anything organized like at the end of last week. Unfortunately, there are some early signs of even hotter temperatures—upper 90s—for Monday and Tuesday. CLICK HERE for your detailed 7-Day Forecast. 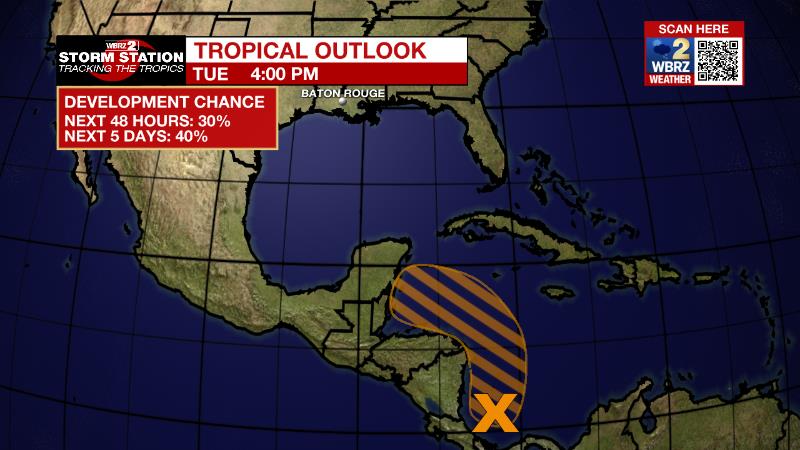 The Explanation: An upper level ridge will center over the region through at least the first half of this week. As we have already seen at times over the past few weeks, the ridge will create sinking, warming air which causes mainly dry days and hotter than average temperatures. The best chances for any pop-up showers or thunderstorms will be along marine breezes as they drift inland during the afternoons. With high temperatures reaching the mid 90s and dew points trending into the oppressive category in the mid 70s, feels-like temperatures could reach heat advisory criteria if they are at 108 degrees or more for several hours. The ridge will remain rather sturdy but could have some weakness on the eastern and southern sides by Thursday or Friday to allow some afternoon convection to develop. Still, at this time, coverage should only be isolated, at best.