A record high, low temperature was set on Tuesday morning as thermometers did not drop below 71 degrees. The previous mark was 70 degrees in 2018. More record high lows and record high temperatures will be within reach on Wednesday (82, 1909) and Thursday (84, 2018) as well.

A *DENSE FOG ADVISORY* has been issued for parishes along and south of I-12 from 10pm Tuesday to 10am Wednesday. Visibility could be reduced to ¼ of a mile or less at times, causing slow and hazardous driving conditions. It is recommended that you slow down and use low beam headlights.

*DENSE FOG ADVISORY* for the shaded area. Take it easy driving and check with @WBRZtraffic for updates. #lawx #mswx pic.twitter.com/WTGpwKVQUb

Next 24 Hours: Winds will be a big factor in the forecast overnight. If they can drop into the 5-10mph range, expect widespread fog to develop over the Gulf of Mexico and push inland, reducing visibilities for the morning drive. Otherwise, skies will be mostly cloudy with low temperatures remaining muggy in the upper 60s. Once fog diminishes, and that could take a few hours to happen on Wednesday morning, some breaks of sun are expected during the afternoon. The late February warmth will continue and highs will jump back into the low 80s. A stray shower is possible.

Up Next: Thursday will bring continued spring-like weather. The morning will be mild and foggy with low temperatures in the upper 60s. The afternoon will be warm with high temperatures in the low 80s. While some breaks of sun are expected, clouds will be the main feature in skies and a stray shower will still be possible. 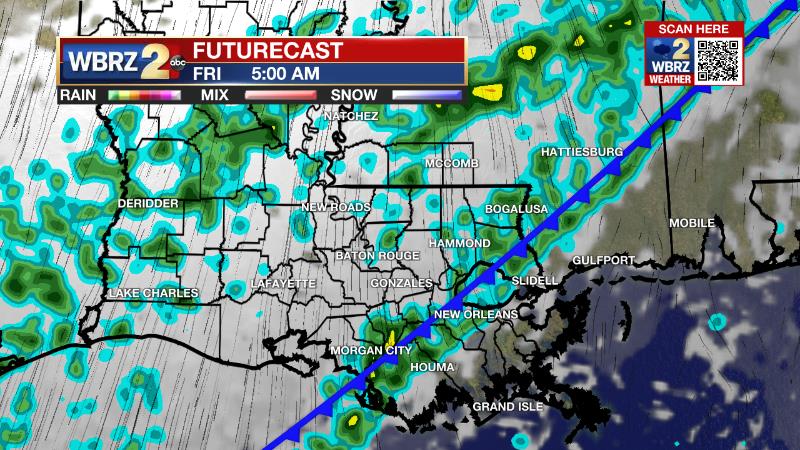 A very slow moving cold front will nudge through on Thursday night and Friday leading to mainly cloudy skies and scattered showers. A full frontal passage should lead to cooler air Friday afternoon into the weekend. However, skies may not clear entirely and quite a bit of cloud cover is expected to remain. A reinforcing front will come by with more clouds and isolated showers on Sunday followed by even colder air to start next week. CLICK HERE for your detailed 7-Day Forecast.

The Explanation: A deep, southwesterly flow in the atmosphere will persist through the end of the week and is a key player in several aspects of the forecast. First, a couple of weak disturbances embedded in this flow will pass well north of the local area allowing a stray shower or thunderstorm to be possible on Wednesday and Thursday. Second, the deep southwest winds will also continue to usher very warm and muggy air over the region. The unseasonably warm air mass will pass over cool nearshore Gulf of Mexico waters and allow some sea fog to develop Tuesday and Wednesday nights—especially if the winds can decrease below 10mph. Slightly drier air aloft will allow for some sunshine to break through the fog and low cloud deck during the subsequent afternoons. High temperatures will find their way into the low to mid 80s, flirting with records through Thursday. Third and finally, an upper level trough of low pressure will nudge a slow moving cold front closer to the area on Thursday evening. The southwesterly flow aloft will be parallel to the cold front and is not conducive to a swift frontal passage. Therefore, there could be a period late Thursday through Friday where there is a 30+ degree range in temperatures from the Louisiana coast to southwest Mississippi. As the front passes through, instability will be very weak so rain is the only expectation as far as precipitation goes, and most of the activity will occur behind the front Thursday night into Friday. Once the front finally chugs along on Friday afternoon, temperatures will cool and stay below average for a few days. Since the upper level winds will remain out of the southwest, a lot of clouds will stick around in the wake of the front Friday and Saturday. The next upper level trough of low pressure and associated cold front will swing through on Sunday. Enough moisture should be available for isolated showers will develop on Sunday. This system will be much more progressive. The upper level wind flow will turn northwesterly behind it allowing a much more thorough drying of the atmosphere. Expect rapidly clearing skies and another big dip in temperatures will lows in the 30s and highs in the 50s on Monday.