The same stale weather pattern is expected to persist through the rest of the week. With mainly cloud skies, high temperatures will be below average.

Next 24 Hours: Mostly cloudy skies will continue overnight. This time of year, average low temperatures should check in around 71 degrees but the blanketing effect of the clouds will likely keep thermometers a degree or two above that. Into Wednesday, areas further away from the coast stand a chance of seeing some hours of sunshine early in the day. These sections that warm into the upper 80s will have the most instability available for scattered showers and thunderstorms to develop as a weak front approaches form the north in the afternoon. One or two storms could cause small hail and gusty wind.

Up Next: Thursday and Friday will then bring more gloomy conditions with mostly cloudy skies and occasional showers and thunderstorms. Overall, major threats are low but there will continue to be a non-zero chance for downpours, small hail and gusty wind in any thunderstorms. Neither day looks like a total washout. The struggle for sunshine will cause below average high temperatures in the 80s. Over the weekend, some drier air is expected to filter into the region helping to break apart clouds and lower daily rain coverage. It is a little too early to tell if this dry air will take over by Saturday or wait until Sunday. Tigers and Jags fans will be watching closely! CLICK HERE for your detailed 7-Day Forecast. 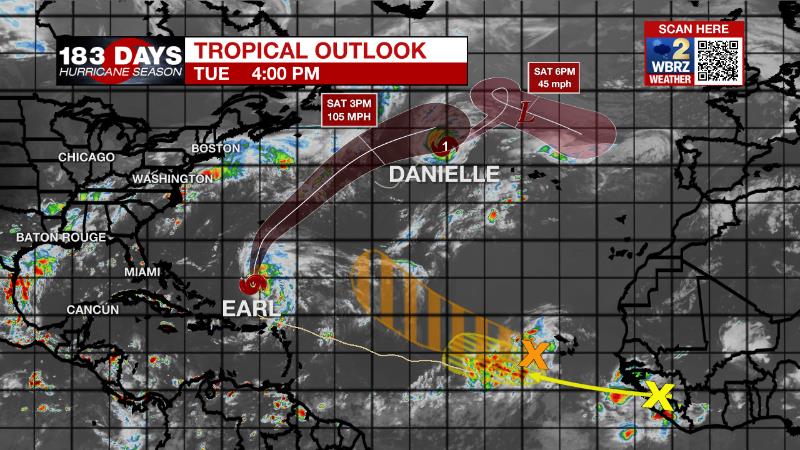 The Tropics: As of 4pm Tuesday, Tropical Storm Earl was located about 600 miles south of Bermuda producing 65mph winds and moving north at 7mph. Earl is expected to become a hurricane later this week as it turns to the north-northeast and then a major hurricane as it accelerates past Bermuda into the north Atlantic.

As of 4pm Tuesday, Hurricane Danielle has slowed down in the north Atlantic with maximum sustained winds of 75mph. The storm will continue to weaken as it stalls in the coming days.

Disorganized showers and thunderstorms continue near the Cabo Verde Islands extending southwestward several hundred miles in association with a broad area of low pressure.  Environmental conditions provide a sixty percent chance of a tropical depression forming in a few days while moving westward to west-northwestward at 15 to 20 mph over the eastern and central tropical Atlantic.

A tropical wave currently located over western Africa is forecast to emerge offshore into the eastern Atlantic in a day or two. There is a twenty percent chance of formation as the system moves west-northwestward over the eastern tropical Atlantic.

The Explanation: The local area will remain in southwesterly wind flow aloft on the east side of a shortwave trough of low pressure. Within this flow, occasional disturbances coupled with daytime warming will create enough lift for showers and embedded thunderstorms to develop. With above average moisture in the atmosphere, the threat for heavy rain cannot be ruled out but mainly cloudy to overcast skies may limit the warming needed to maximize this threat. On Wednesday, rain coverage may tick up slightly as a weakening front nudges southward into the local area. With the best chances for sunshine coinciding with areas north of I-12 and closer to that boundary, these sections will have the highest coverage in showers and thunderstorms. Cells will be moving quick enough to mitigate any significant flooding risk but some cooler air aloft could support gusty wind and small hail. To end the week, the trough of low pressure will close off into a full upper level low and provide persistent clouds and periods of showers and thunderstorms. The intensity and organization of thunderstorms will greatly depend on temperatures and since clouds will be thick most of the time, there may not be enough warming for significant impacts. At worst, nuisance flooding and small hail will be possible. Over the weekend, another shortwave trough of low pressure will eject out of the Midwest, stretching and absorbing the upper level low. As this occurs, some drier air is expected to spill into the region which will lead do a decrease in clouds and precipitation by Sunday. As that trough gets closer, a weak front may push through the area and even reduce surface dew points (humidity) slightly earlier next week and provide a couple of drier, sunny days.