Tuesday PM Forecast: another wet day on the way

Expect to follow up one gloomy, damp day with another. The area may dry out just a bit to end the week.

Next 24 Hours: The widespread rain will taper to just spotty showers overnight. Clouds will remain thick and low temperatures will not escape the low 70s. Another round of showers and thunderstorms is anticipated for Wednesday, especially during the second half of the day. With drier time in the morning, high temperatures will chug into the low 80s. Similar to Tuesday, any thunderstorms will be capable of briefly heavy rain, potentially leading to minor flooding of low lying areas.

Up Next: Scattered showers and thunderstorms will remain in the forecast Thursday before scaling back to isolated or even dry on Friday. The forecast for the weekend is a bit tricky. All signs point to enough ingredients staying around for a few showers and thunderstorms to develop each day, Saturday through Monday. A weak upper level disturbance could come by just in time to trigger some activity Saturday evening—a trend that we will monitor closely for the LSU vs. Auburn football game. Temperatures will be near average through the period, only “busting” lower in locations where rain begins before the afternoon. CLICK HERE for your full 7-Day Forecast. 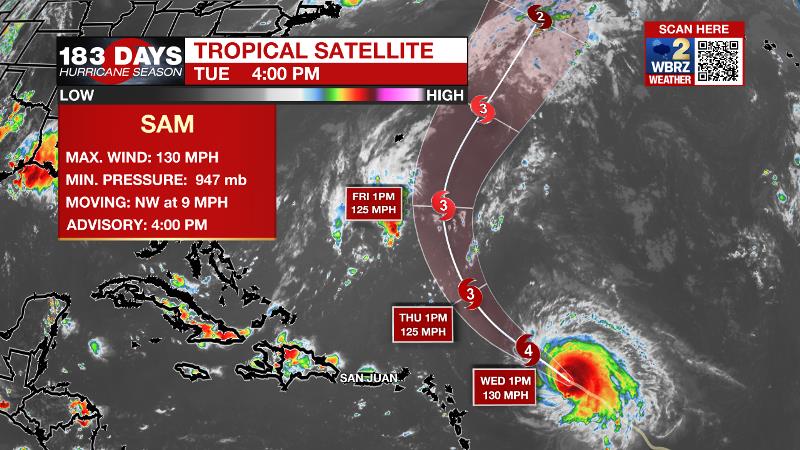 The Tropics: Hurricane Sam will pass well north of the Lesser Antilles this week before turning north into the Atlantic Ocean as a major storm by Friday. The remnants of Peter east of Bermuda have a 40 percent chance of regeneration before the middle of the week. A broad area of low pressure southwest of the Cabo Verde Islands has an 80 percent chance of formation while moving westward over the tropical Atlantic. A trailing wave rolling off the African Coast has a 90 percent chance of development over the next five days. For the latest tropical forecasts, advisories and information, visit the WBRZ Hurricane Center as we navigate all 183 Days of Hurricane Season.