Pop-up showers and thunderstorms will be around each afternoon through the weekend. We continue to monitor a pair of tropical systems in the Atlantic Basin.

The Tropics: As of 4pm Thursday, Tropical Depression Fred was near the northeastern tip of Cuba, moving west-northwest at 12mph with maximum sustained winds of 35mph. Slow strengthening of Fred is anticipated as the storm moves out of stronger wind shear and into warmer water in the southeastern Gulf of Mexico. The same general motion will continue through Friday followed by a turn to the northwest over the weekend. Fred will pass through the Florida Keys and then parallel Florida before landfall as a 45 – 55mph tropical storm, which is projected for early Monday in the Florida Panhandle. As has been the case all week, no impacts are expected for the local area. 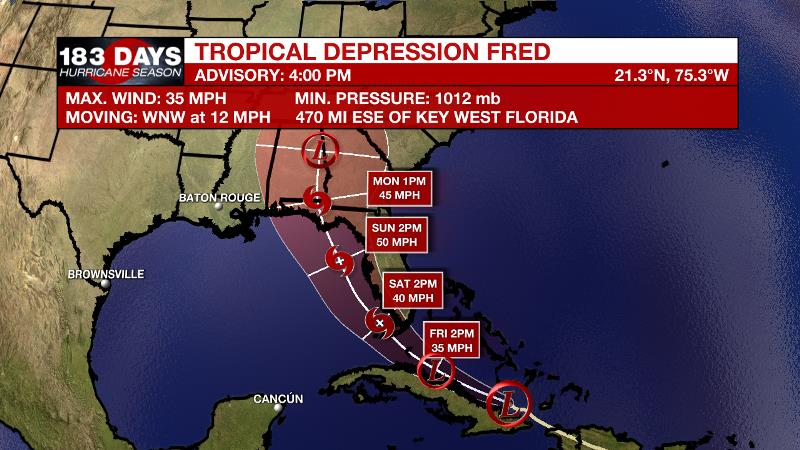 Satellite-derived wind data from this morning indicated that a small area of low pressure has developed along a tropical wave about 1200 miles east of the Lesser Antilles.  However, the low does not quite have a closed circulation, and the associated shower and thunderstorm activity remains disorganized.  Environmental conditions favor the development of a tropical depression by the weekend and chances are set at 70 percent. At this time, it is too early for certainties, but at least in the “way too far out” scenarios, there is no reason for alarm on the central Gulf Coast. 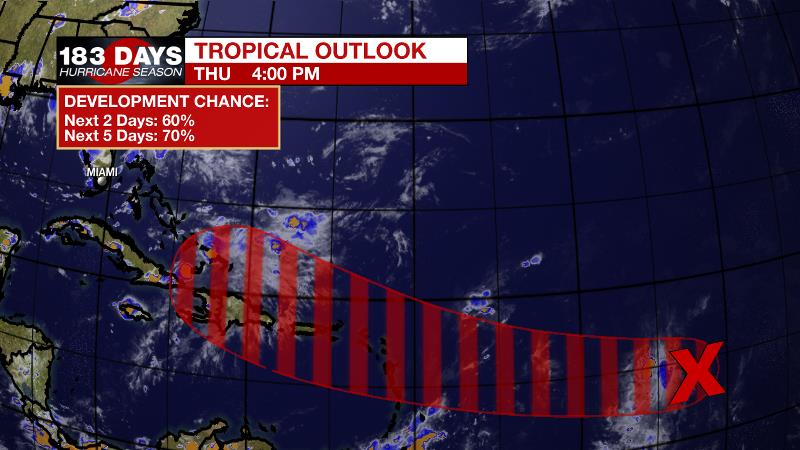 Next 24 Hours: All showers will fizzle by 10pm with mostly clear skies to follow. Low temperatures will stop around 73 degrees. Rinse and repeat on Friday with morning sunshine giving way to scattered, afternoon showers and thunderstorms, primarily between 12pm – 6pm. High temperatures will top out near 91 degrees.

Up Next: Scattered, afternoon showers and thunderstorms will remain common this weekend. For the 13 Parish, 3 County Forecast Area, rain coverage will be around 40 to 60 percent. As for temperatures, highs will be near 91 with lows near 75. Monday and Tuesday will likely feature a bit more activity due to an upper level trough adding more instability to the atmosphere. With plenty of moisture in the atmosphere as well, more widespread showers and thunderstorms are anticipated. One or two storms could cause minor street and poor drainage flooding in addition to frequent lightning. CLICK HERE for your full 7-Day Forecast.

The Explanation: The local area is beneath a weakness between two upper level ridges. The area of relatively low subsidence (sinking air) leaves little inhibition for showers and thunderstorms to bubble up on the regular. Through Saturday, expect scattered, afternoon showers and thunderstorms to pop and drift after midday highs near 90 degrees. With rain and cloud relief in the afternoons, the heat index could top out around 105 degrees but will not last very long. It still appears as though Tropical Storm Fred will have little to no impact on the local area. A developing upper level trough, which will help to keep Fred just east of Louisiana and Mississippi, will also destabilize the local atmosphere even more as deep moisture remains in place. The result of these factors will be even more of an uptick in showers and thunderstorms, especially Sunday through Tuesday. Later next week, as this upper trough retreats, the atmosphere may warm up translating into a little less convection and higher high temperatures. Overall, not much change to the pattern is expected.