Thunderstorms stay in the forecast, slight changes by Wednesday

While there are no major weather threats to the area, keep a radar nearby as showers and thunderstorms will stay in the forecast. A weak cold front will be the main culprit for early week activity.

Next 24 Hours: Keep an eye to the northwest as a cold front and associated line of showers and thunderstorms along I-20 will be moving southeast toward the local area. If it holds together, and signs are that it well, this activity could affect the Baton Rouge area tonight with downpours, frequent lightning and gusty wind. Low temperatures will be in the mid 70s. Scattered showers and thunderstorms remain possible throughout Tuesday. Still, these will be capable of brief downpours, lightning and wind. Activity will not be limited to afternoons, the normal time for summer storms. High temperatures are pegged for the mid to upper 80s.

Up Next: Wednesday through Friday should feature typical summertime weather. Though the count of showers and thunderstorms will go down, the area will not be completely dry. Isolated, afternoon activity should pop-up each day. Thursday appears to be the least active afternoon. High temperatures will be in the low 90s and low temperatures will be in the mid 70s. Another slight uptick in showers and thunderstorms is figured into the weekend forecast thanks to a weak upper level disturbance moving across the Gulf Coast. Rainfall totals through the next seven days will be around 1 to 3 inches, but an isolated higher amount is possible.  CLICK HERE for your full 7-Day Forecast.

The Tropics: At 4pm Monday, Tropical Storm Claudette was located east of the Outer Banks of North Carolina. Moving toward the east-northeast at 29 mph, an increase in forward speed is expected over the next day or so. On the forecast track, Claudette will move across the northwestern Atlantic Ocean and pass just south of Nova Scotia on Tuesday. Maximum sustained winds have increased to 45mph with higher gusts. Some weakening is expected on Tuesday, and Claudette is forecast to become a post-tropical cyclone Tuesday afternoon and dissipate late Tuesday night. 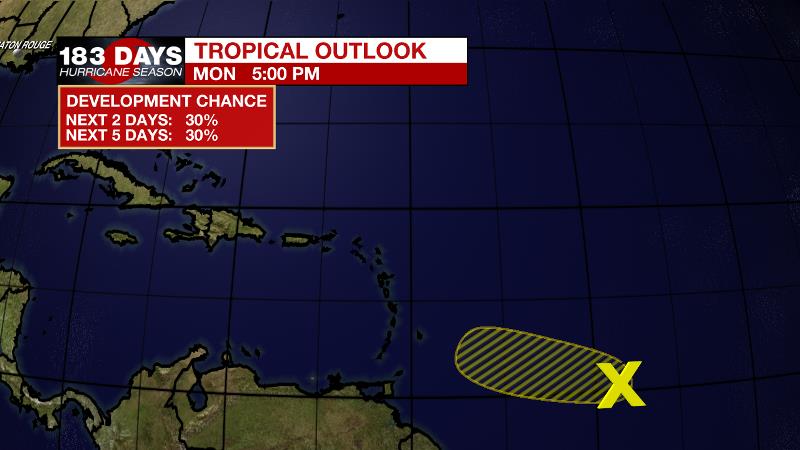 A tropical wave located about 750 miles east-southeast of the Windward Islands is producing disorganized showers and a few thunderstorms. Recent satellite-derived surface wind data indicate that the wave has become better defined since yesterday. There is a 30 percent chance of development during the next couple of days before upper-level winds become less conducive for further organization by Thursday.

The Explanation: Well above average atmospheric moisture plus a weak cold front moving into the region will help to activate scattered to widespread showers and thunderstorms through Tuesday. On Monday afternoon, radar identified a broken line of showers and thunderstorms organizing closer to I-20, which is near the position of the surface front. This cluster will move southeastward into the local area this evening. Plenty of moisture and instability will help these thunderstorms dump heavy rain in a short time. Some street and poor drainage flooding is possible. Frequent lightning and gusty wind could occur as well. The front will not be able to flush tropical moisture from the region as it pauses north of I-10 by Tuesday morning. The boundary will focus convection as daytime warming send thermometers into the mid to upper 80s. Wednesday through Friday, a ridge of high pressure centered over the Midwest will nudge over the local area leading to a bit more subsidence (sinking air) and so showers and thunderstorms should taper into the isolated category with primarily afternoon activity. Beneath this ridge, high temperatures should reach climatological normal in the low 90s and some isolated mid 90s will be possible where showers and clouds are unable to keep thermometers in check. An inverted trough will move from east to west across the central Gulf Coast states over the weekend and will likely lead to an increase in areal coverage of showers and thunderstorms.