Warm temperatures will be the headline story for the local area this week. The best chance for an isolated shower or thunderstorm will come today.

Today and Tonight: When the heat gets this high, we sure do not mind a cool down shower in the afternoon. About 30 percent of the area will get that benefit today after highs top out around 94 degrees with feels-like temperatures well over 100 degrees. Of course, where showers do not occur, the heat will persist for several hours. Overnight will be mostly clear and muggy with lows near 74 degrees.

Of note, ragweed has forced the weeds pollen count into the high category. The common late summer/early fall allergen may necessitate preventative medications over the coming days. Ragweed pollen usually reaches peak levels in mid-September; this type of pollen can cause seasonal allergic rhinitis (more commonly known as hay fever), which affects as many as 23 million Americans. There are 17 species of ragweed in the United States. The weeds grow in most regions, typically blooming and producing a fine-powder pollen from August into November. 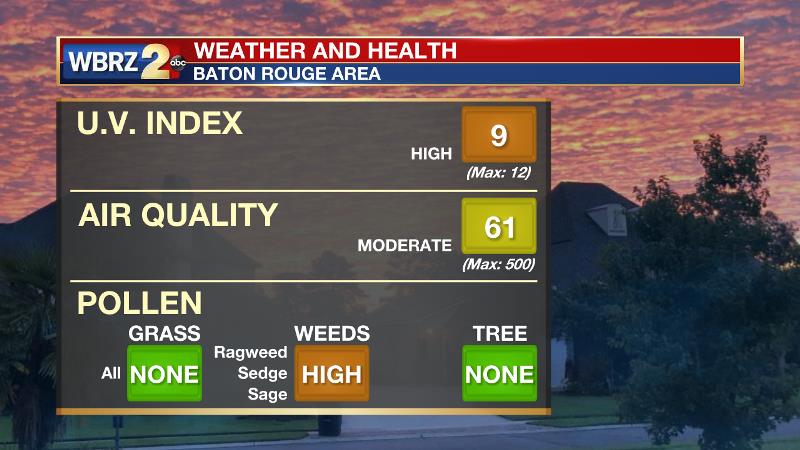 Up Ahead: The upper levels of the atmosphere are expected to remain relatively dry with a general sinking motion Wednesday through Friday. At the surface, this translates to lower than average rain chances and above average temperatures. Each afternoon should make it into the 90s with little more than a spotty shower or thunderstorm. By the weekend, return flow in the form of southeast winds from the Gulf will result in more humidity and therefore slightly lower highs and slightly higher afternoon rain coverage.

Any chance we could get a cold front?

The Tropics: A wide picture of the tropics shows a much less intimidating map than one week ago. Florence and Isaac are still labeled but only as remnant lows with no redevelopment expected out of either. Florence will rain out over the northeastern United States while Isaac will race across the southern Gulf as a weak, open tropical wave with a few showers.  Finally, Joyce is also a depression, well out into the eastern Atlantic, and will drift aimlessly south of the Azores. 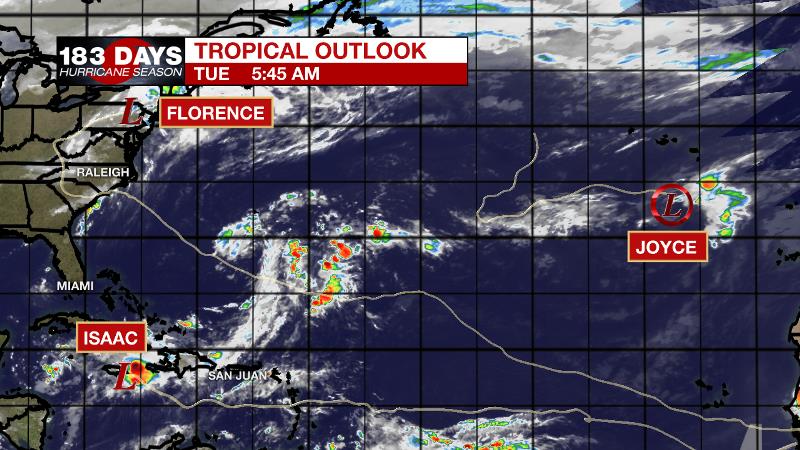 A ridge over Texas will migrate eastward to fill in the upper level void left behind by the remnants of Florence. The axis of this ridge will setup over Louisiana on Wednesday before sliding farther east to the Carolinas by the end of the week. Once this happens, deeper southeast flow will result in a thicker column of moisture in the atmosphere, therefore allowing a slow but steady increase in the number of showers and thunderstorms each afternoon Thursday through Sunday. Model height anomalies stay above average and this will be reflected at the surface with above average temperatures persisting well into next week. There are no so signs of a fall cool down as the new season begins on Saturday. By the final weekend of September, forecast models are hinting at our first visit from a bonafide cold front, but it is too early to lock in on that.