Temperature tease prior to a chilly rain

Don't be fooled by milder air on Tuesday. Cold temperatures will dominate the 7-day forecast.

Today and Tonight: A storm system will push into the region on Tuesday. Expect mainly cloudy skies with isolated showers. It will be briefly milder, possibly reaching the low 70s, prior to the arrival of a cold front. Southerly winds will hold thermometers in the upper 50s overnight as showers increase from west to east.

Up Next: Into Wednesday, scattered to widespread rain is expected as the front slides overtop of the Baton Rouge area. Chilly air will push in at the same time, dropping temperatures through the 50s and into the 40s by late afternoon. Showers will be out by Thursday morning, as another surface high pressure slides along the Gulf Coast. Temperatures will remain below average through the remainder of the workweek with highs in the 50s and lows in the 30s. The forecast for next weekend is tricky as a storm system is expected to develop in the Gulf, but the timing on when, and if, rain could occur is still unclear. 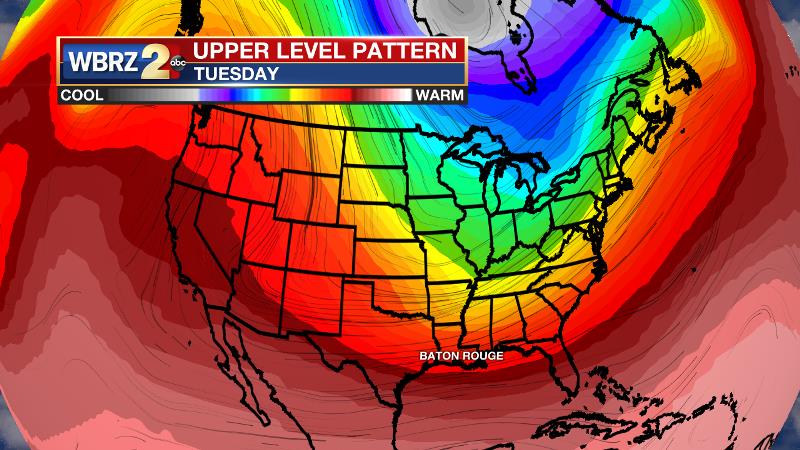 Below average temperatures are expected to continue for at least the next week and perhaps into early February. An upper level trough will be persistent across the Eastern United States allowing, cold, Canadian based air to spill southward. These cold temperatures in the upper levels will translate down to the surface prompting the chilly forecast. Keep those layers handy.

A surge in low level moisture will push highs in the low 70s and maintain a low cloud deck through the day. Ahead of an approaching cold front, a few showers may develop by the afternoon hours. A vigorous positively tilted shortwave trough and the associated cold front will then push through the forecast area Tuesday night through Wednesday night. Ample uplift and moisture will lead to widespread showers developing early on Wednesday. This event should not bring severe weather, but some rumbles of thunder may occur thanks to elevated instability. Rain could briefly be moderate to heavy but total amounts will be manageable. As the front pushes into the area, temperatures will fall and a chilly rain is then expected through afternoon. 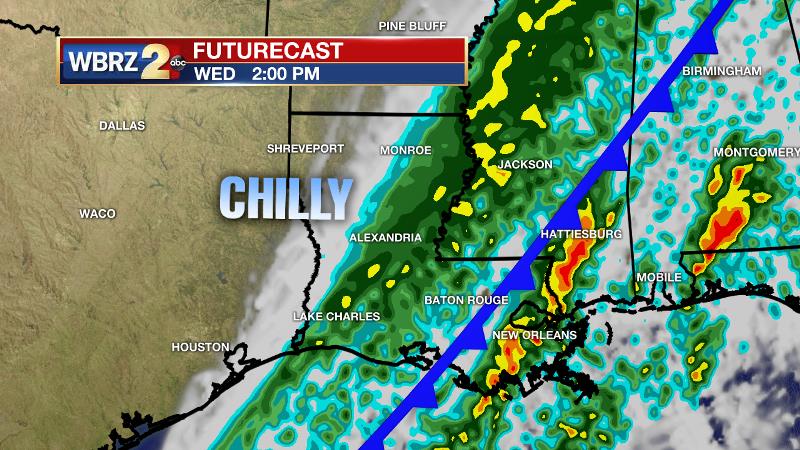 Rain will quickly end from west to east overnight with clearing skies by Thursday morning. Deep layer northwest flow will take hold on Thursday and remain in place Friday. A reinforcing cold front will push through the area Thursday night without precipitation. Temperatures will stay well below average with highs in the 50s and lows in the 30s Wednesday, Thursday and Friday nights. Some additional light freezes are possible. Into the weekend, both the GFS and the ECMWF models indicate that another upper level disturbance will slide across the Gulf south over the coming weekend. Both also indicate the potential of a Gulf low forming off the Louisiana coast and then pushing east toward the Florida Panhandle Saturday or Sunday. In this scenario, the local region would remain on the northern and colder side of the system through the weekend. Most of the precipitation will likely stay offshore and only coastal areas may experience showers. Timing is not yet locked in, but should become more clear over the coming days. The current forecast is for temperatures to remain just warm enough to keep any precipitation that does develop in liquid form.