The week’s heat should peak on Thursday. By Friday and the weekend, a more active shower and thunderstorm pattern is anticipated.

On Tuesday, isolated showers and thunderstorms managed to develop as expected, primarily north of I-10, amounting to about 50 percent coverage in rainfall. A few storms were able to produce gusty wind and down some trees as mentioned in the severe weather outlook on WBRZ broadcasts and in the morning blog. 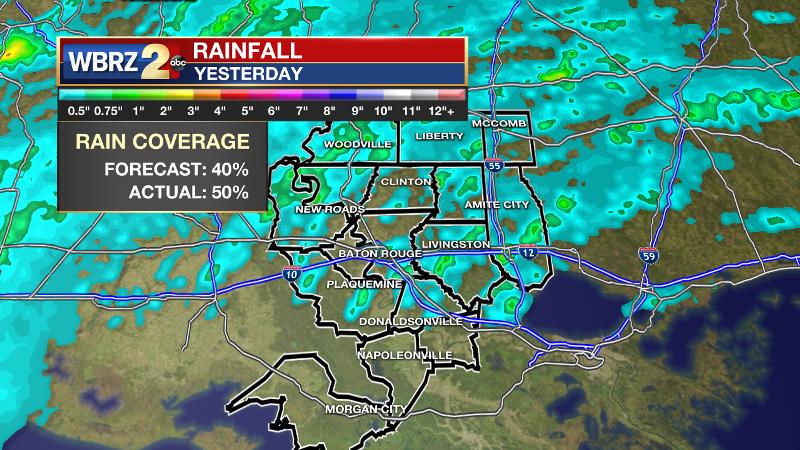 Today and Tonight: Clouds remain very stubborn across the area and this has caused a tweak down to the high temperature forecast. Readings should peak by mid-afternoon around 92 degrees. Isolated showers and thunderstorms will be possible once again, especially during the afternoon from Baton Rouge to areas north and west. Overnight will be partly cloudy with lows bottoming out around 73.

Up Next: Through Thursday, expect high temperatures to stay above average and top out in the mid 90s. As you would expect in the summer, an isolated shower or thunderstorm will be possible in the afternoon hours. Overnight lows will be in the low to mid 70s. Friday and Saturday, some more instability should be around for greater coverage in afternoon showers and thunderstorms. At this time, scattered to widespread activity is expected. 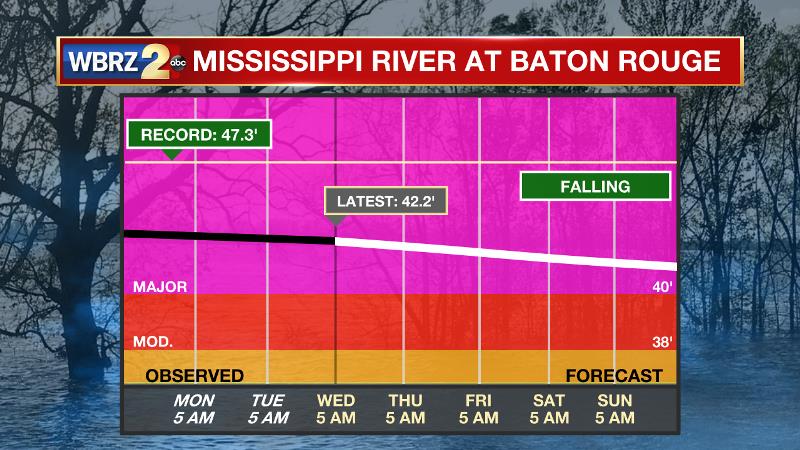 The Mississippi River: At Baton Rouge, major flood stage continues with a level of 42.2’ as of Wednesday morning. Peaking at 44.1’ on March 19, the river set its 7th highest recorded crest at Baton Rouge. At 172 days, this year marks the longest period above flood stage at Baton Rouge. The level will slowly fall, but is likely to stay above flood stage for several weeks to come. The high water will remain an issue for river traffic and river islands, although some inundation will continue for unprotected low-lying areas. The city of Baton Rouge and the main LSU campus are protected by levees up to 47 feet. Some soggy areas and seepage may be noted due to the long duration of high water placing pressure on the levees. As some of the Mississippi River diverts into the Atchafalaya River, gauges at Krotz Springs and Morgan City will stay high as well. This creates backwater flooding in parts of Assumption Parish in areas such as Bayou Chene, Stephensville and around Lake Palourde.

An upper level ridge will center over the forecast area on Wednesday. However, a lingering upper level trough in northeastern Texas will maintain just enough lift to aid isolated showers and thunderstorms to develop in the afternoon hours. The best chance for this will be closer to that trough in the northwestern half of the forecast area. The ridge should be pretty sturdy through Thursday causing a daily battle between daytime heating induced convection and sinking air aloft. For this reason, a mention of isolated showers and thunderstorms will be carried in the forecast. On Friday, an inverted trough is expected to pass from east to west along the Gulf Coast beneath the broad ridge across the south, central United States. The inverted trough will help to spark off scattered to widespread rain and thunderstorms through Saturday. Especially with daytime heating, the afternoons should be the most active periods.