A bit of warming will precede the next storm system. A period of steady, possibly heavy, rain could impact your weekend plans.

Today and Tonight: Warming will begin on Thursday afternoon with high temperatures jogging into the low 60s. Clouds will begin to develop as well, with thickening coverage through the day. Each of these changes will be in response to a southeasterly wind shift. Overnight will be mostly cloudy with low temperatures in the upper 40s.

Up Next: An area of low pressure will develop over Texas on Friday sending cloud cover and showers into the region by evening. Not all will receive rain on Friday, but the umbrella is a good contingency for date night. A significant amount of moisture will accompany a storm system across the central Gulf Coast on Saturday leading to widespread rain. The current, estimated timeline is for most of the rain to occur between dawn and dusk. Two to three inches could fall through Saturday night. Since there has not been heavy rain in quite a while, grounds should handle this fairly well and river flooding is not expected. However, with downpours in a short time, streets and poorly drained areas may briefly flood. High temperatures will break into the 60s during this time, but dry and chilly conditions will return on behind a cold front. Showers will end from west to east Saturday night, but clouds could linger through much of Sunday.

High pressure will cross into the Southeast on Thursday, allowing winds to turn around to the southeast. Resulting return flow will begin a gradual increase of moisture in the atmosphere. At first, this will be reflected by slightly warmer temperatures and increased cloud development. 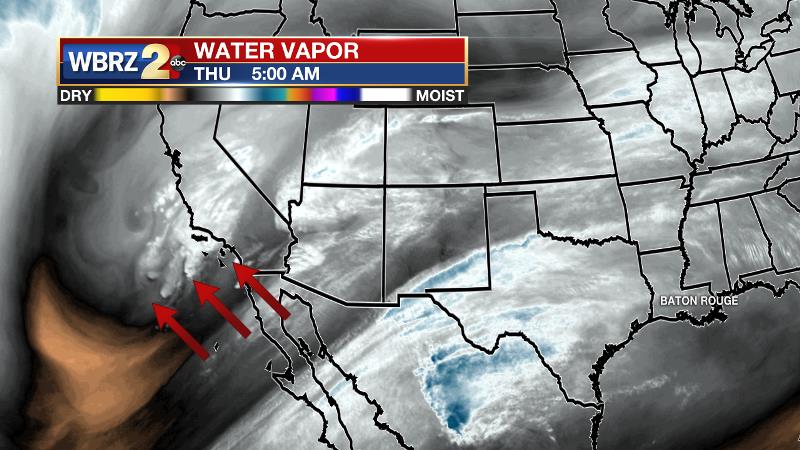 A shortwave trough is digging into the Southwest U.S. and will become the catalyst for active weather across the Midwest and Gulf Coast through the weekend. This trough will cut across the southern third of the United States and cause a surface low pressure system to strengthen over Texas on Friday. This will increase the southerly flow, priming the atmosphere with abundant moisture and precipitable water values near records for the time of year. Forecast models remain in good agreement that the low will track east, northeastward across Texas and the Gulf Coast with widespread heavy rain—especially on Saturday. 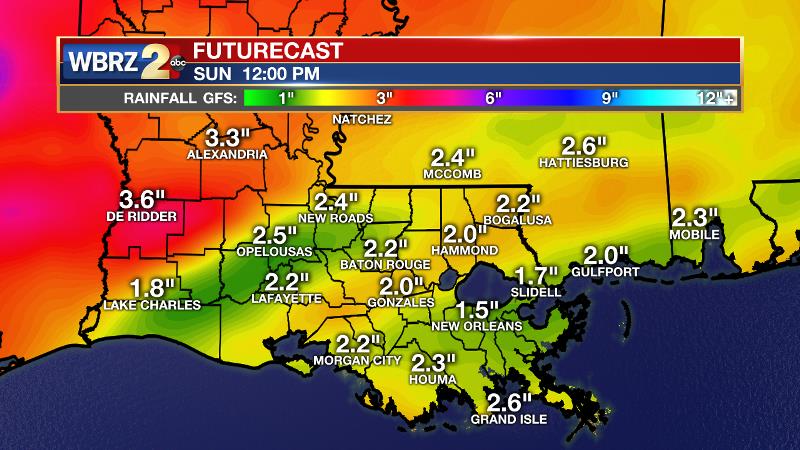 Fortunately, this will be a fast moving system, which will limit total rainfall amounts, but strong forcing created by the low, ample divergence aloft, and very high atmospheric moisture content will lead to two or possibly three inches of rain in many locations. The Weather Prediction Center indicates a 2 out of 4 “slight risk” for excessive rainfall. Rivers should be able to tolerate this runoff, but typically flood prone areas could have some issues on Saturday.   Additionally, forecast models continue to keep instability confined to coastal areas. There will be some severe thunderstorm potential in those areas with just a few rumbles of thunder further inland. A slight shift inland by the surface low could bring the threat of severe thunderstorms farther north towards the I-10 corridor. Much cooler than average temperatures will return for the first part of next week.