Another cold front will drag across the area on Wednesday. Behind this system, a short period of dry weather is in store before rain returns by the weekend.

Today and Tonight: Another gloomy day is ahead. With a cold front slowly pushing south, a line of rain and thunderstorms will pass across the WBRZ Weather forecast area between 6 – 9am, arriving in the Baton Rouge area around 8am. Initially, rain could fall heavily with some gusty wind also possible. Once the line passes, rain will become lighter, winds will turn northwesterly and temperatures will fall quickly. After a morning high in the low 70s, afternoon thermometers will be in the low 50s. Certainly, take some layers as you will need them leaving work and school later today. Clouds and showers will be a nuisance through the day as well. Overnight, more considerable clearing is expected with lows dipping into the low 40s. 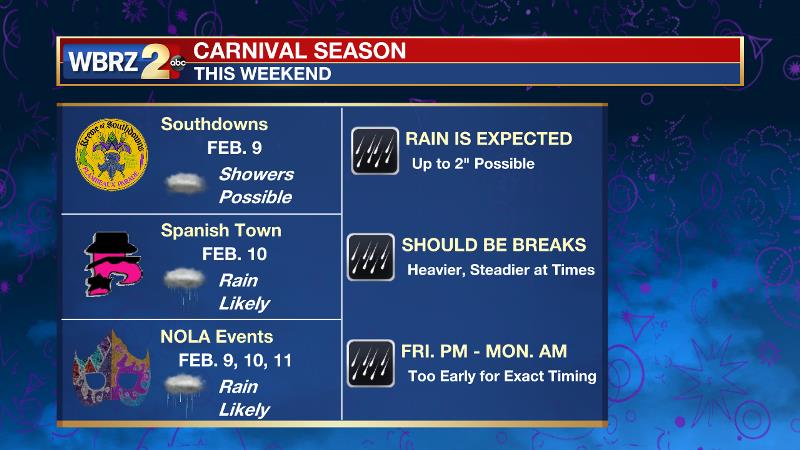 Up Next: Expect a break from rain with some cooler temperatures on Thursday. Unfortunately, it will not take long for unsettled weather to return. Clouds will race back into the region on Friday with showers even possible late. It previously looked like the Krewe of Southdowns would roll dry but even that is not a certainty at this point. Off and on rain is slated for the weekend. While rainfall amounts look manageable, there could be some steadier, heavier pockets of activity. All told, up to 2 inches are the current forecast for the three-day stretch. It is not yet clear as to when another front will push through and clear skies. Should the pattern plug up, rain showers may stick around into the middle of next week.

As a longwave trough moves eastward toward the Mid-Atlantic states on Wednesday an attendant cold front will sag southward into the Gulf of Mexico. Due to the relative parallel orientation of this front to the upper level wind flow, it will be slow to move and moisture will not cleanly flush out of the area. Clouds and showers will likely continue for most of the day. As the front progresses farther southward, some clearing is expected overnight as winds shift northwesterly. Some drying and cooling of the air mass is expected as well. As a trough digs into the western United States, deep southwest flow will develop on Friday, quickly returning deeper moisture, therefore clouds and even showers to the forecast area. At this time, rounds of positive vorticity advection moving through that large scale southwest flow are expected to produce rounds of rain across the forecast area as that general jet stream setup persists. Late Friday to at least late Sunday will be a wet stretch with off and on periods of rain. Forecast model rain amounts are not too aggressive, but an inch or two is certainly on the table at this point. Beyond the weekend, forecast confidence diminishes. The ECMWF is more progressive in moving the trough eastward thus sending a cold front through the area. On the other hand, the GFS model leaves the western trough in place and stalls a front locally, therefore holding rain in the forecast into early next week. These details should become clearer through the remainder of the week.