Showers may stop a top-10er, chill around the corner

A weak, slow-moving storm system will bring isolated showers to the region on Wednesday and Thursday. This system will bring the area a slim shot at some light rain, which has been scarce this autumn. If 0.2 inches of rain does not fall before Friday, this fall will go down as one of the top 10 driest on record in Baton Rouge.

Today and Tonight: Wednesday will be partly sunny early with thickening clouds through the day and an increasing chance for showers. The best chance for some light rain will come in the afternoon and evening, especially west of I-55. Measurable rain should not occur for more than 30 percent of the 13 Parish, 3 County forecast area. High temperatures will be mild, making it into the mid 70s. Overnight will be cloudy with a few showers and low temperatures in the low 60s. 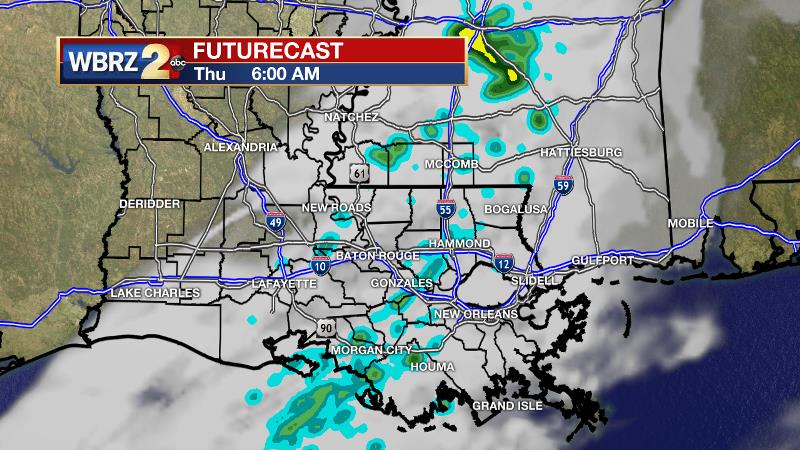 Up Next: Isolated showers will be possible early Thursday before a weakening cold front moves through the area. The afternoon will still be mild with highs in the low to mod 70s. All told, very little measurable rain is expected. Sunny and seasonable weather will return for Friday and the upcoming weekend with temperatures no more than 3-5 degrees above average. Though early for certainties, there is confidence that temperatures beyond the 7-Day Forecast will turn quite chilly.

The @WBRZweather 7-Day reflects slightly warmer than average temps but, NOT SO FAST! Forecast models in good agreement on another big chill next week | #LaWX #MsWX pic.twitter.com/6LB8RbE8Xf

The Tropics: The Atlantic Basin is quiet; no tropical development is expected over the next 5 days. The official hurricane season ends tomorrow.

A shortwave trough will pass north of the area on Wednesday. Since this trough will flatten out as it crosses the Mississippi River, the associated cold front will lag behind the trough axis and weaken as it crosses the area. Moisture fields appear sufficient to support some rain showers but given the low precipitable water values, forecast model quantitative precipitation output is reasonably low. Overall, rain coverage should not exceed 50 percent of the 13 Parish, 3 County forecast area over the 24-hour period from Wednesday afternoon to Thursday afternoon. Zonal flow behind the weak front will result in seasonable temperatures through the upcoming weekend. A mid-level ridge will allow some moderation of temperatures by Sunday and Monday. While beyond the scope of the 7-Day Forecast, models agree that a deep trough will dig into the Eastern U.S. resulting in well below average temperatures from the middle of next week into the second week of December.