A FLASH FLOOD WATCH is in effect for the entire WBRZ Weather Forecast Area until Thursday evening. Additional rainfall of 1 to 3 inches with locally higher amounts will be possible. Areas of southern East Baton Rouge and northern Ascension Parishes are most prone to flooding issues because of 10-15 inches falling there since Monday. High rainfall rates could overwhelm drainage capacity. Ponding of water in low lying and poorly drained areas will be possible, and flash flooding could occur where the heaviest rain occurs.

Next 24 Hours: Scattered showers and thunderstorms will move around the area into the evening hours, but a lull in activity is expected during the middle of the night. Low temperatures in the upper 60s will keep it feeling muggy as winds stay out of the east at 10-15mph.

A weak upper level disturbance could spark more showers and thunderstorms early Thursday. Then again, with some daytime warming, an afternoon crop could develop as well. Keep in mind the scattered wording, a constant rain is not expected and a few spots could miss precipitation altogether. High temperatures will make it into the low 80s.

Up Next: Friday will bring a transition with the more active weather shifting west. Still, a few showers and thunderstorms could develop, especially during the afternoon hours. Over the weekend, a drier pattern will take hold with sunny and warm afternoons, pushing 90 degrees. Humidity will not quite be to summertime levels, allowing overnight readings in the mid 60s. Rain free conditions are expected through Tuesday. CLICK HERE for your full 7-Day Forecast. 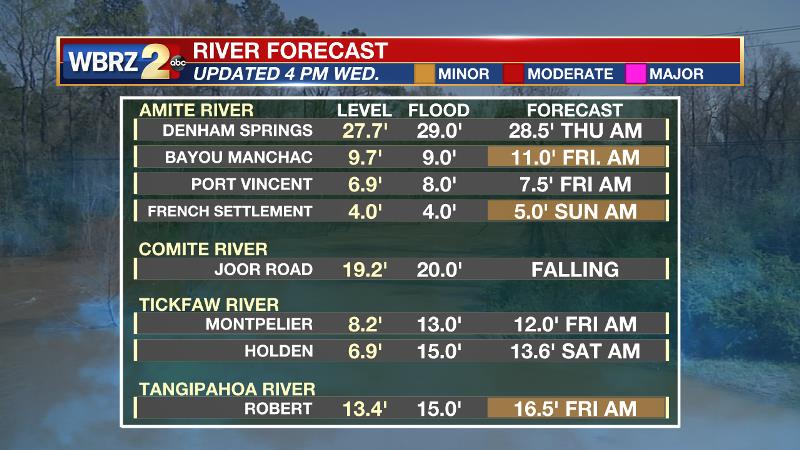 Area river forecasts have been adjusted down. At this time, only the Amite River at Bayou Manchac and French Settlement and the Tangipahoa River at Robert are expected to make it into minor flood stage. For more information on the impacts you could expect near these locations, CLICK HERE and then click on the river gauge site of interest. 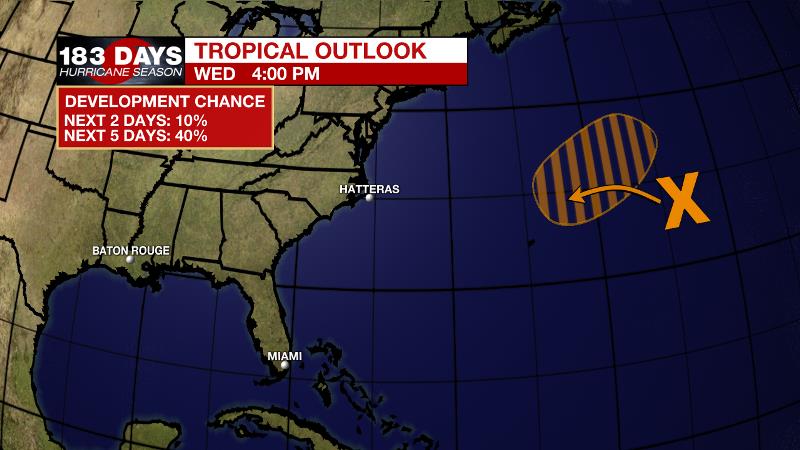 The Tropics: It is not that we want to talk about this, but June is around the corner. A non-tropical low pressure system is forecast to develop a few hundred miles northeast of Bermuda by Thursday afternoon and produce gale-force winds. The low is then forecast to move west-southwest over warmer water on Friday and could become a short-lived subtropical cyclone over the weekend to the northeast of Bermuda.  The system is expected to move toward the north and northeast into a more hostile environment by Monday. The National Hurricane Center gives a 40 percent chance of development. This system does not pose a threat to the United States.

The Explanation: The main heavy rainfall axis should slowly begin to shift west toward Texas over the next few days but will be stubborn to do so until a strengthening upper level ridge begins to build over the Southeast. Both moisture and instability will remain high on Thursday. Model guidance points to a weak, upper level disturbance that would lend to convective development Thursday morning. Beyond that, primarily daytime warming will trigger activity Thursday and Friday afternoons. The upper level ridge will take hold over the weekend and control the weather through next Tuesday. Due to sinking air beneath the ridge, skies should remain mostly clear. With no rain to cool off the temperatures, highs will reach the upper 80s and possibly low 90s. With slightly lower humidity, lows will generally be in the mid to upper.