A weak cold front will drive some drier air into the region in time for the weekend. That front may be all that stands between the local area and yet another disturbance set to develop in the Gulf.

The Tropics: Having left behind more than 20 inches of rain in parts of coastal Alabama and Florida, Tropical Storm Sally will continue to jog northeast at 5-10mph. Though winds were at 60mph as of 4pm Wednesday, rapid weakening is expected as this storm continues inland. Still, heavy rain, gusty wind and isolated tornadoes are expected across Alabama, Florida and Georgia. 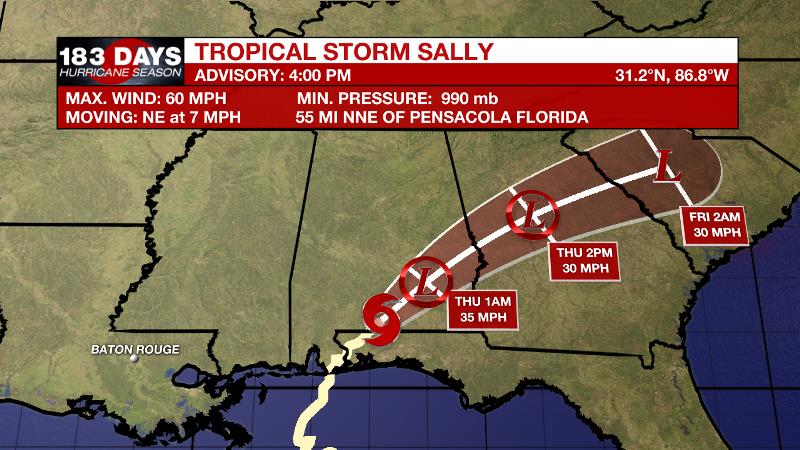 Hurricane Teddy has temporarily paused strengthening but is expected to become a major storm north of the Virgin Islands. Just days after a strike from Hurricane Paulette, Bermuda will have to monitor Teddy as well. Tropical Storm Vicki will dissipate over the far eastern Atlantic before the week is over.

(SEE TITLE IMAGE) Showers and thunderstorms associated with a broad area of low pressure over the southwestern Gulf of Mexico gradually continue to become better organized.  Upper-level winds are forecast to become more conducive for further development, and there is a 70 percent chance that a tropical depression forms late this week or over the weekend while the low meanders over the southern Gulf of Mexico.

Showers and thunderstorms associated with an area of low pressure located southeast of the Cabo Verde Islands have changed little during the past several hours. Environmental conditions are conducive for development of this system and there is a 70 percent chance that a tropical depression forms as this system moves west across the Atlantic.

A non-tropical area of low pressure is located over the far northeastern Atlantic Ocean several hundred miles northeast of the Azores.  This system is forecast to move southeastward during the next few days where it will encounter warmer water temperatures, and has a 20 percent chance of formation.

The Next 24 Hours: Clouds associated with Sally will linger overnight. Low temperatures will stop in the low 70s with north winds of 5-10mph. Some sunshine will be available on Thursday with high temperatures making it into the upper 80s. Only a spotty shower is possible.

After That: On Friday, a weak cold front will drift through the area reinforcing northerly winds. The result will be a drier than usual air mass, lower dew points and therefore cooler than average highs and lows. The front could stir up a shower, especially south of I-10, on Friday. The temperature forecast into early next week calls for highs in the mid 80s and lows in the mid 60s—indeed a little taste of fall. The precipitation forecast is a bit trickier and depends on where the weak front stalls. In the current forecast, the drier air will hang well into next week with isolated showers only possible south of I-10. If the front weakens quicker or stalls farther north, some tropical moisture could move farther inland for a better chance of rain for all. 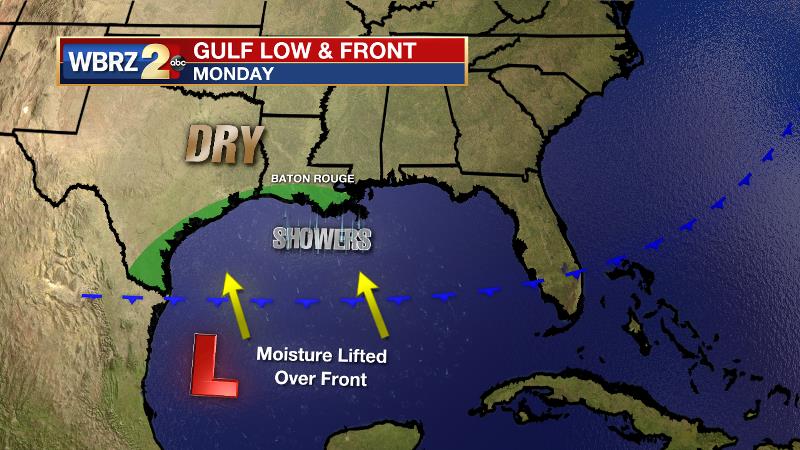 The Explanation: A large surface high pressure system has worked with northerly flow on the west side of Sally to drive a drier continental air mass into the region. This will help to push a weak cold front across the Gulf Coast on Friday with surface high pressure building in from the north on Saturday. Cooler than average temperatures are expected beginning on Friday. The drier air will also limit rain chances to mainly coastal areas by Saturday. After that, we will need to monitor a broad area of low pressure in the southwestern Gulf of Mexico that has a high chance of developing into a tropical depression. Some forecast model guidance moves a low pressure system into the northern Gulf as early as this weekend with others as late as next week. As is usual, there is a lot of uncertainty with this yet to develop low. There will likely be a battle between the surface high pressure to the north, the stalled front to the south and the tropical disturbance in the Gulf. Should the boundary remain intact, it should keep any substantial rain over the Gulf or at most, limit it to coastal areas. Sally was a good example of how quickly forecasts can change, so please continue to check in.