BATON ROUGE- Many are noticing a delay in COVID-19 test results amid a major increase in the number of people that are getting them.

One of the major labs processing the COVID-19 molecular diagnostic tests in Louisiana, Quest Diagnostics, announced Wednesday that the surge in demand has resulted in extended turnaround times.

The company says its average turnaround time continues to be one day for "priority one patients," but has extended to three to five days for all other populations.

"We will monitor the situation and provide additional updates should significant changes occur with our COVID-19 testing. We recognize the critical role laboratory testing plays in pandemic response and are working 24/7 to bring quality COVID-19 testing to patients and communities across the United States," the company stated in a news release.

Residents in West Feliciana Parish experienced the delay in test results, but parish officials said several factors were out of their control.

"The National Guard coordinated the COVID-19 testing that was done in West Feliciana Parish on June 9-11 and June 16-18. The Parish agreed to be a testing site, but had no other control or involvement," the parish released in a statement.

"Once we realized that our residents were not being contacted with their results in the expected time frame, we feverishly began working with the National Guard and the LA Dept of Health to get results out as soon as possible; however, there were more delays."

West Feliciana Parish officials say these test results are being sent to the Louisiana Department of Health, who is then responsible for contacting residents with their results.

Some residents have been contacted, but officials are uncertain of a timeframe for those awaiting results.

As of July 1, there are no further free testing dates planned in West Feliciana Parish.

Quest Diagnostics announced the cause of delayed results just one day after West Feliciana Parish's statement.

Louisiana Department of Health stated Wednesday, July 1, that it has been in contact with commercial testing labs across the state about a variety of topics that include testing result turnaround times.

"While testing turnaround times, in general, have been longer than ideal, the department is working with commercial labs to address issues that factor into those turnaround times."

State officials say these delays were not limited to Quest Diagnostics alone and the delays in West Feliciana were not "unusual as cases increase and demand for testing rises."

Most coronavirus tests completed in Louisiana are through commercial labs like Quest Diagnostics. 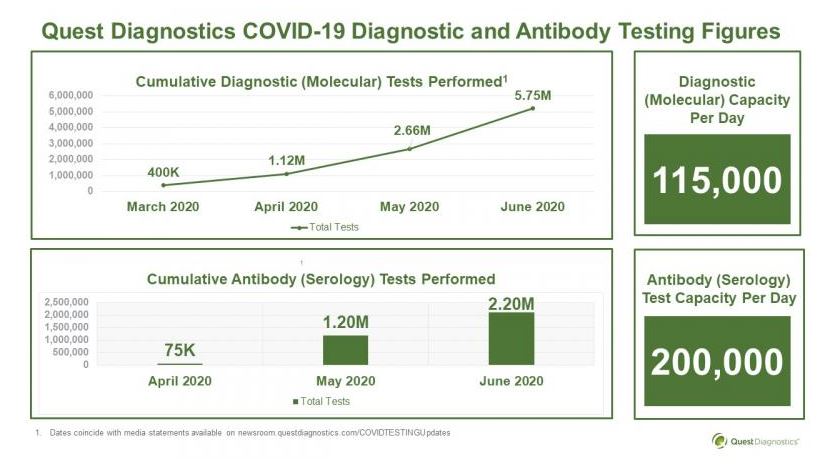