You will notice a difference in steeping outside on Tuesday. A much drier and somewhat cooler air mass has arrived. The afternoons will remain warm but less humid.

Today and Tonight: Your Tuesday will bring average temperatures for the time of year. A few clouds will hang around the area but some sunshine will guide lunchtime thermometers into the upper 70s and lower 80s with an eventual afternoon high temperature near 84 degrees. Light, north winds and clear skies will allow low temperatures back into the mid 60s overnight.

Up Next:  Late Wednesday, the recent front will rebound north. This will bring isolated showers and thunderstorms back to the forecast by Thursday afternoon. A stronger cold front will then move through the area Friday and early Saturday. After another round of showers and thunderstorms, a punch of crisp air will deliver a fall feel into the weekend. At this time, expect highs in the 70s and lows in the 60s and even 50s for the upcoming weekend. For LSU and Southern fans, this will mean that jackets may be needed for morning tailgates and those heading into the evening games. 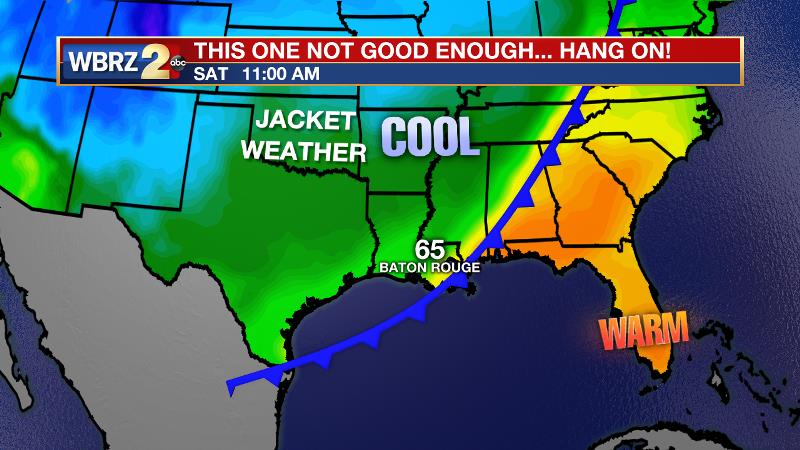 The Tropics: A non-tropical low pressure system is expected to develop along a frontal boundary over the central Atlantic Ocean between Bermuda and the Azores by Monday night. Gradual development of this system is possible while it moves slowly westward. The National Hurricane Center gives this disturbance a 50 percent chance of tropical or subtropical depression formation Tuesday or Wednesday. Another non-tropical low pressure system is forecast to develop over the western North Atlantic between Bermuda and the east coast of the United States in a few days. The low could acquire some subtropical characteristics later in the week and it is given a 30 percent chance of development. A trough of low pressure extending from the Yucatan Channel northeastward across the southern Florida peninsula is producing disorganized showers and thunderstorms.  There is a 10 percent chance of development as this system moves off the southeast U.S. coast.  The disturbance is forecast to merge with a low off the east coast of the United States by Wednesday, and no further development is anticipated after that time. 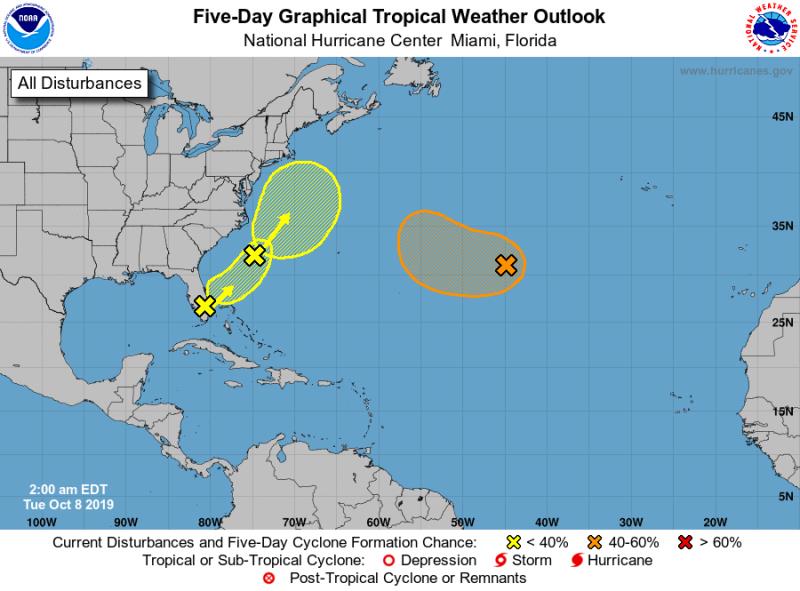 A weak cold front has pressed into the Gulf of Mexico and allowed some drier, cooler air to spill into the region. Tuesday will be seasonably warm with highs in the mid 80s but comfortable warmth with no significant humidity. Onshore flow will commence on Wednesday allowing moisture to return to the atmosphere. By Thursday, this will be enough to trigger isolated afternoon showers and thunderstorms. The next storm system will be a more significant cold front that is expected to bring a round of showers and thunderstorms late Friday followed by a Canadian based air mass. Timing with this front has been accelerated by forecast models, which would allow cool air and dry conditions to set up for the weekend. Highs and lows are expected to be 10 degrees below average behind this one.