Pop up thunderstorms temporarily relieve heat for some

A few more showers and thunderstorms than expected developed on Thursday thanks to a vigorous sea breeze. While the daily shower count will fluctuate a bit, a persistent summertime pattern will remain established through much of next week.

Next 24 Hours: Any leftover showers will steadily diminish through the evening. Beneath partly cloudy skies, low temperatures will be near 75 degrees. As long as dew point temperatures remain in the mid 70s, that is as low as thermometers can go and it will continue to feel very sticky and uncomfortable. Some early sunshine will allow high temperatures to top out near 91 degrees on Friday with heat indices in the low 100s thanks to the aforementioned humidity. From late morning through late afternoon, showers and thunderstorms will pop as a sea breeze moves inland. About 40 percent of the 13 Parish, 3 County Forecast Area will receive rain.

Up Next: Not much change is expected Saturday but a slight uptick in showers and thunderstorms is figured into the forecast by Sunday thanks to a weak upper level disturbance moving across the Gulf Coast. Afternoon action will be “scattered” through at least Monday. Really, with no sign of dew point temperatures (humidity) falling and the atmosphere remaining slightly cooler and more unstable than average, rain chances will stay on the board. CLICK HERE for your full 7-Day Forecast. 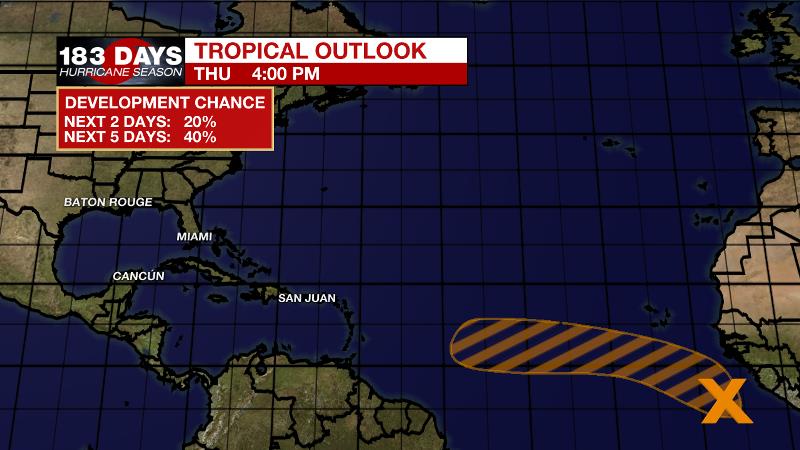 The Tropics: A strong tropical wave is expected to emerge off the coast of Africa over the next day or so. There is a 40 percent chance of some gradual development of this system is possible by early next week while moving generally westward over the far eastern Atlantic.

The Explanation: Even though a ridge of high pressure nudged over the local area Thursday, the count of showers and thunderstorms did not go down as expected. The surface high pressure system, known as the “Bermuda High” this time of year, allowed a southeast to northwest moving sea breeze to spark off showers and thunderstorms during the late morning hours. As we have felt with dew point temperatures in the mid to upper 70s, there has been no shortage of moisture in the atmosphere and as sunshine warms temperatures to the upper 80s and low 90s, all of these factors combine to produce convection. There are some signs that moisture could drop just a touch Friday and Saturday leading to a few less showers, but it will not dry out enough to shut down activity. An inverted upper level trough of low pressure will scoot across the Gulf of Mexico Sunday and this feature will trigger scattered to widespread showers and thunderstorms—likely the busiest day of the extended forecast. While the center of the trough will move west of the local area by Monday, the upper levels will remain a bit cooler and more unstable than usual allowing for near to above average areal coverage of showers and thunderstorms well through next week. As a result, high temperatures will remain just a few clicks shy of average.