Dry conditions will drop overnight lows to near 70 degrees tonight.

Today and Tonight: Expect mostly sunny skies again today. Temperatures will be heating to near 92 degrees, but low dew points will prevent heat index values from entering the triple digits. It will still be hot, but the humidity will be more manageable. Clear skies overnight too with lows near 70 degrees. 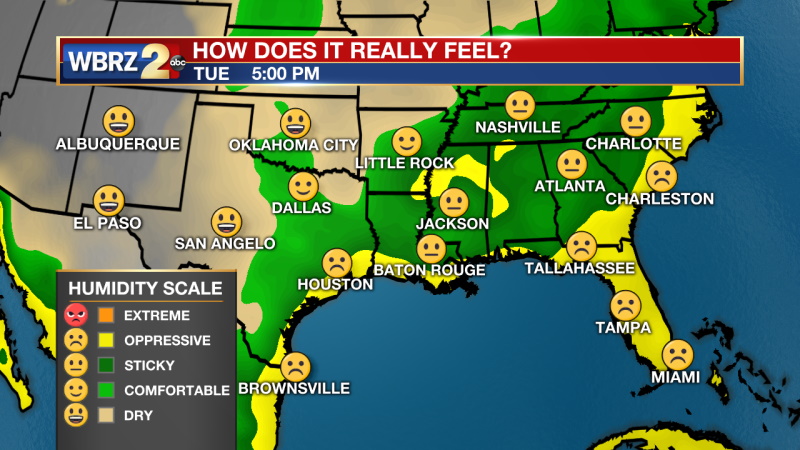 Up Next: Sunny and dry is the weather story for this week. It will be hot, but highs in the low 90s will be more comfortable with dew points in the 60s. Wednesday high temperatures will be near 91 and lows near 70. Yes, 70, that’s not a typo. Thursday will be a bit cooler with temperatures barely scratching the 90s. Our regular humidity will start to come back on Friday and rain chances will go up to 20-30%.

The Tropics: Isaias has weakened into a tropical storm once again after landfall in North Carolina last night. There are no major changes to the local forecast due to Isaias. Click here to see the current forecast cone.

From the National Hurricane Center

At 500 AM EDT (0900 UTC), the center of Tropical Storm Isaias was located over northeastern North Carolina near latitude 36.3 North, longitude 77.5 West. Isaias is moving toward the north-northeast near 28 mph (44 km/h), and this general motion accompanied by some additional increase in forward speed is expected through today. On the forecast track, the center of Isaias will to move into southeastern Virginia early this morning, near or along the coast of the mid-Atlantic states today, and across the northeastern United States into southern Canada tonight.

Maximum sustained winds are near 70 mph (110 km/h) with higher gusts. Only gradual weakening is anticipated while Isaias moves north-northeastward near the mid-Atlantic coast today. A faster rate of weakening is expected to begin tonight, and the system is forecast to become post-tropical tonight or early Wednesday.

We are in a dry pattern now as we are placed at the base of an upper-level trough. The general flow pattern will become dominantly north and northwest. This means dry air will continue to funnel in throughout the week. This trough is moving slowly and rain chances won’t spike back up until the end of the weekend and early next week. However, Tuesday and Wednesday afternoon shower activity will increase along the coast along the sea breeze. At the surface, a stationary front marks the edge of the trough and is slowly digging south. Once it completely passes, it will change the flow bringing in more moisture and heat.