The cold front responsible for our recent wet weather pattern has finally departed to the southeast. We will get a much needed chance to dry out and even enjoy some lower humidity for a few days.

Today and Tonight: There will be plenty of sunshine around to start the week.  Beneath a mostly sunny sky, highs will peak around 82, followed by lows near 60 overnight.

Up Next: Surface high pressure will dominate the weather pattern this week as a stationary front that in the central Gulf of Mexico remains offshore. Now this front could feasibly spew a shower as far north as I-10 on Tuesday, but this is a low chance and anything that does develop inland would be light and brief. Initially, expect at or below average high temperatures through Wednesday. The high pressure center will shift our east during the latter half of the week, helping to increase high temperatures and dew points, meaning some higher humidity can take hold beginning Thursday. Highs will approach the 90s Friday and Saturday, before a fragmented cold front returns showers to the region. 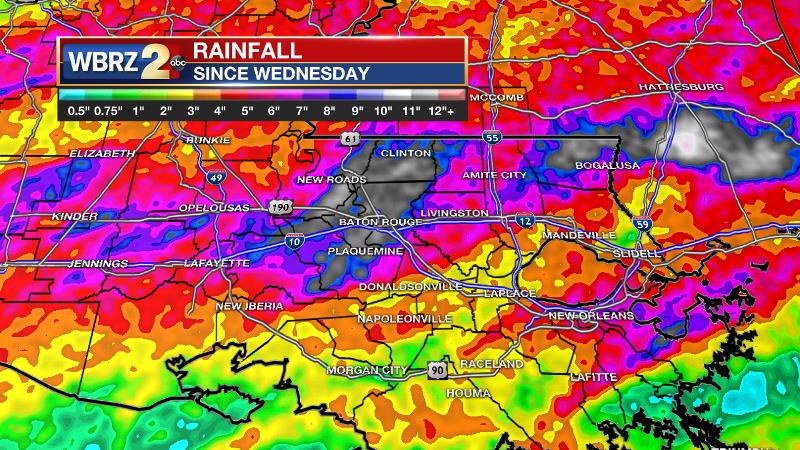 Radar estimated rainfall totals from Wednesday to Sunday were as high as 10-14 inches for areas along and north of I-10. Spacing this out over 5 days certainly helped runoff from creating major flood issues along area rivers, but it was still too much and many are cresting above flood stage.

The Mississippi River: At Baton Rouge, major flood stage continues with a level of 43.1’ as of Monday morning. Peaking at 44.1’ on March 19, the river set its 7th highest recorded crest at Baton Rouge. In addition, at 128 days this marks the second longest period above flood stage. Heavy rain that fell north of the area will keep the river high through Mid-May. At about 44’, an updated forecast now suggests this second crest could challenge the first earlier this year. Still, the high water is primarily an issue for river traffic and river islands, although some inundation will continue unprotected low-lying areas. The city of Baton Rouge and the main LSU campus are protected by levees up to 47 feet. Some soggy areas and seepage may be noted due to the long duration of high water placing pressure on the levees. As some of the Mississippi River diverts into the Atchafalaya River, gauges at Krotz Springs and Morgan City will stay high as well. This creates backwater flooding in parts of Assumption Parish in areas such as Stephensville and around Lake Palourde. Like Big Muddy, this is expected to be a prolonged event but is not uncommon for the time of year.

If we have ever earned some drier weather, that time is now. The slow moving frontal system responsible for the 5 day deluge has finally been shoved into the Gulf of Mexico. This boundary could create precipitation along the coast through Wednesday and perhaps sneak a shower inland on Tuesday but the chance of this and any amounts would be minimal. Dew points have fallen into the low 60s in response to northerly winds and it feel comfortable for Mid-May. With a broad area of high pressure strengthening over the Southeast, and winds shifting southeasterly we will continue to warm up Thursday and Friday but remain dry. The next weather maker will arrive over the weekend. A trough will nudge the high pressure farther east. That trough could potentially send another front into our area, but it is still unclear if that trough will be deep enough to do that. Of course, frontal passages become increasingly unlikely in Late May into June.