Scattered showers and thunderstorms will remain in the forecast through at least the middle of the week, especially during the afternoon hours. Tropical moisture may increase rain chances for the upcoming weekend.

On Monday, approximately 50 percent of the 13 Parish, 3 County forecast area received measurable rain. The forecast was for 40 percent of the area to get in on the action. The highest rain totals came near the Pointe Coupee, West Feliciana Parish and the Amite, Pike County borders where 1-2 inches fell. 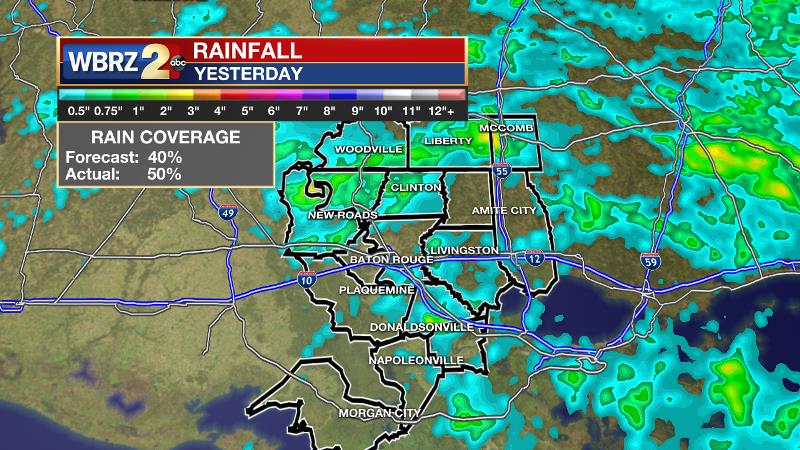 Today and Tonight: Once again, scattered showers and thunderstorms will be able to develop after a midday high near 90 degrees. Any storms could bring gusty wind, heavy rain and frequent lightning before drifting away. Activity will diminish overnight with a low near 74 degrees.

Up Next: Two areas of surface high pressure will camp out in the Gulf of Mexico, one off the Florida Coast and the other over southeast Texas. These systems will help to push Gulf moisture north and onshore through the week. This will continue to provide ample moisture for afternoon showers and thunderstorms to dominate the local weather pattern through mid-week. Humidity will stay elevated, which will limit high temperatures to the low 90s, but the heat index will make it feel about 5-8 degrees warmer. The upcoming weekend could have an even further increase in rain chances depending on where a pocket of tropical moisture travels.

NEW: @NHC_Atlantic outlooks area of interest in Caribbean Sea low development chance over the next 5 days... regardless, spread of moisture could increase rain chances for the central, western Gulf Coast by the weekend pic.twitter.com/NnlFba2Tky

The Tropics: Late last week, the GFS forecast model was insistent on a tropical system developing in the Gulf of Mexico. Over the weekend, this scenario trended less likely, as the situation fell in line with the ECMWF forecast model in showing just a plume of moisture from the Caribbean Sea through the Gulf of Mexico to the Gulf Coast. The National Hurricane Center assigns this unorganized area of disturbed weather a low chance of development over the next five days as it crosses the Yucatan Peninsula into the southwestern Gulf of Mexico. The associated moisture is likely to reach the western half of the Gulf Coast by the upcoming weekend, increasing rain chances and rain totals. However, there will be a sharp west to east cutoff in the moisture field so just a slight shift in this moisture would result in a much drier forecast. 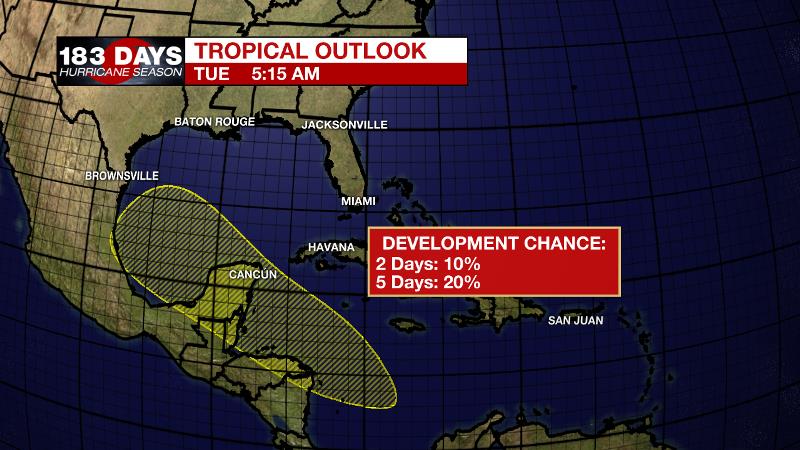 Amidst a steady onshore flow with high low level moisture but only modest mid level moisture, the National Weather Service continues to point out the possibility of microbursts during daily thunderstorms. Therefore, some wind gusts in excess of 30mph will be possible over the next few days with an isolated severe thunderstorm possibly producing gusts over 60mph. The highest possibility of this occurring would be along and east of the Mississippi River. In addition to gusty wind, warm season storms are always capable of a quick inch or two of rain and frequent lightning. Rain chances will remain elevated through at least the week as the region remains stuck between two weak areas of surface high pressure feeding moisture northward from the Gulf. Whereas last week forecast models were in total disagreement as to how the tropics would influence the local weather, now there is more agreement. Models depict a plume of tropical moisture surging northward by the upcoming weekend. As of now, this moisture is slated to feed into Louisiana and Texas but a small shift east would result in much higher rain chances for the local area, so we will continue to monitor this.