The humidity has made an unwelcome return to southeast Louisiana and southwest Mississippi. With that moisture, rain is back in the forecast too.

Next 24 Hours: The clouds that returned on Monday will stay in place overnight, for the most part. A spotty shower is possible but most of the time will be dry. Low temperatures will stop near 70 degrees so it will feel much muggier than previous nights. Into Tuesday, the chance for showers and thunderstorms will increase. Beneath mostly cloudy skies, most locations should have at least a shower. Any thunderstorms that develop could be briefly heavy with some gusty wind. High temperatures will not exceed the mid 80s.

Up Next: Wednesday is expected to be the busiest day of the workweek in terms of showers and thunderstorms—with widespread activity. Similar to Tuesday, any thunderstorms will be capable of briefly heavy rain, potentially leading to minor flooding of low lying areas. Scattered action will remain in the forecast Thursday before scaling back to isolated or even dry Friday into the weekend. All told, the rain totals will generally be under an inch with only a few locally higher amounts. Temperatures will be near average through the period, only “busting” lower in locations where rain begins before the afternoon. CLICK HERE for your full 7-Day Forecast. 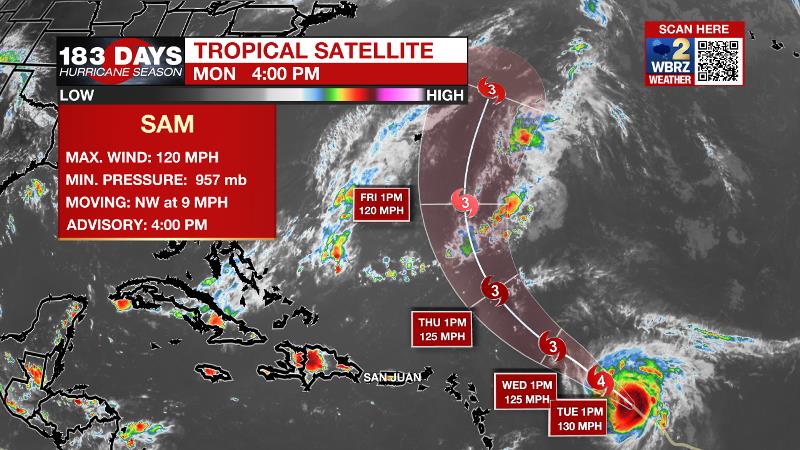 The Tropics: Hurricane Sam will pass well north of the Lesser Antilles this week before turning north into the Atlantic Ocean as a major storm by Friday. The remnants of Peter east of Bermuda have a 60 percent chance of regeneration before the middle of the week. A broad area of low pressure southwest of the Cabo Verde Islands has an 80 percent chance of formation while moving westward over the tropical Atlantic. A trailing wave rolling off the African Coast also has an 80 percent chance of development over the next five days. For the latest tropical forecasts, advisories and information, visit the WBRZ Hurricane Center as we navigate all 183 Days of Hurricane Season.

The Explanation: An upper level trough dug in across the Western U.S. will nudge eastward on Tuesday. With plenty of low level moisture in place, as upper level disturbances spin through the basin of the trough, especially during daytime heating hours, there should be plenty of forcing to initiate showers and thunderstorms. Instability will be supportive of thunderstorms capable of brief downpours and 30mph wind gusts but upper level winds are not favorable for severe weather. Another disturbance will race over the area Tuesday night into Wednesday with a batch of showers and thunderstorms, but the lack of daytime warming will likely keep the activity tame. A second disturbance will pass later Wednesday and like all of the preceding activity, should not produce more than brief downpours and perhaps gusty wind. As a whole, rainfall totals do not look impressive and so some standing water in low lying areas seems to be the most that is possible. The upper level trough will begin to lift north and flatten as an upper level ridge takes hold of the Eastern U.S. Thursday into the upcoming weekend. Enough moisture and instability will likely remain for scattered, afternoon showers and thunderstorms to end the week, especially Thursday. By the weekend, the ridge will warm the atmosphere to decrease instability but with lingering moisture, it is difficult to eliminate rain from the forecast and so an isolated chance is held each afternoon.